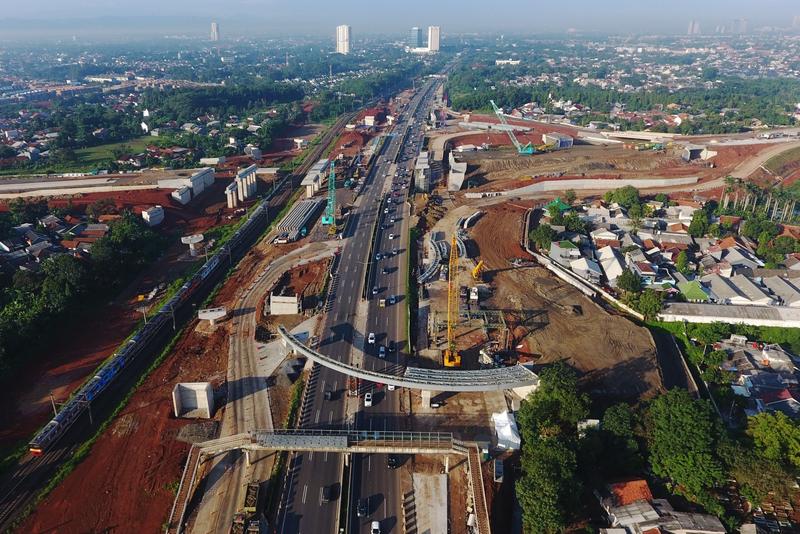 In this aerial photo taken on Feb 1, 2019, cranes stand at a construction site as vehicles travel along the Jakarta-Serpong Toll Road in Jakarta, Indonesia. (DIMAS ARDIAN / BLOOMBERG)

Indonesia is drafting ambitious plans for more than US$400 billion in building projects, from constructing 25 airports to new power plants, as the government seeks to stoke growth in Southeast Asia’s largest economy, according to the country’s planning minister.

The sweeping proposal calls for a record 5,957 trillion rupiah (US$412 billion) in investments from 2020 to 2024, Minister Bambang Brodjonegoro said in an interview this week. As much as 40% of the total will be funded directly by the government, 25% through state-owned enterprises and the rest through the private sector, he said. About 60% of the spending will go toward transportation-related infrastructure, according to a draft of the plan seen by Bloomberg and verified by the ministry.

About 60% of the spending will go toward transportation-related infrastructure, according to a draft of the plan, as the government seeks to stoke growth in Southeast Asia's largest economy

Such spending would build on President Joko Widodo’s strategy of using infrastructure as a key plank to boost economic growth and spread wealth beyond the main island-powerhouse of Java, where the capital is located. Building critical ports and facilities is particularly complicated and costly in Indonesia because the country is dispersed across 17,000 islands through an area spanning the distance between New York and London.

“The only way for Indonesia to have higher economic growth is connectivity,” Brodjonegoro said in Jakarta. “We are planning to establish the equivalent of a highway for the skies by building airstrips or smaller airports for connectivity” in remote areas such as the Papua region, he said.

The proposal is a “positive breath of fresh air” for Indonesian state-owned construction companies, said Evan Hadiwidjaja, head of research at PT Sinarmas Sekuritas. This ambitious plan could benefit their longer term pipeline although their balance sheets could be strained, he said.

Shares of state-owned builders reversed earlier gains to close lower Thursday, as a selloff in Indonesian and other Asian stocks deepened on concern that the trade dispute between the US and China will escalate. PT Wijaya Karya fell 4.2% after gaining as much as 2.1%. PT PP declined 1.2% after advancing 2%, and PT Waskita Karya dropped 2.3% after rising 1.4%.

Despite the potential benefits, massive projects have been challenging for the government to finance in recent years, partly due to low tax compliance in Indonesia and weak commodity prices that have strained the state budget. Several projects have been shelved or delayed, even as bodies including the World Bank have warned of a massive infrastructure gap limiting economic growth. 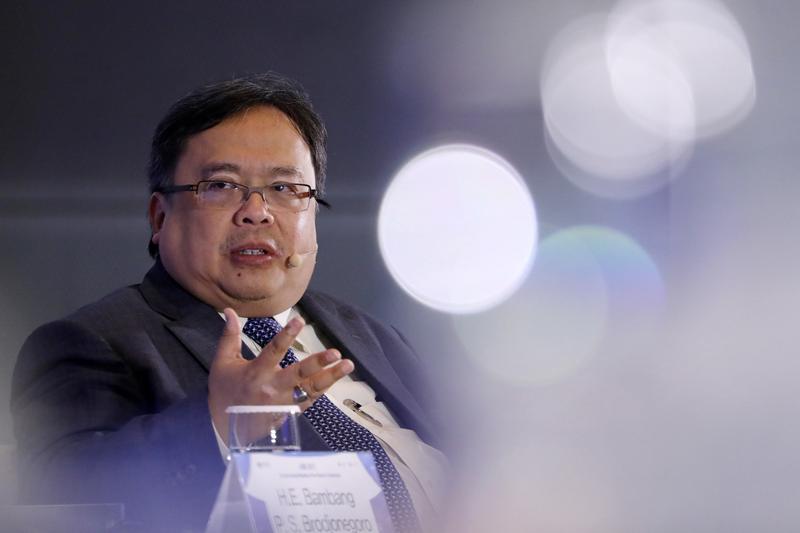 Indonesia has been expanding at about 5% a year. While the government is aiming for growth of 5.3% to 5.6% next year, that’s still short of the 7% Jokowi had targeted before his first term began.

The president, popularly known as Jokowi, is expected to be confirmed for a second term when official results of the April 17 election are announced next week. The ministry is preparing final documents on the investment plan to present to the president for approval, a ministry spokesman said.

According to the draft plan, about 17% of the infrastructure spending will also go toward energy, followed by 10% for irrigation

The proposed investments exceed the US$350 billion infrastructure drive — then the largest in the nation’s history — set during Jokowi’s first term. The new spending plan is equivalent to about 5.7% of gross domestic product from 2020 to 2024, during which the government has targeted economic growth of 5.4% to 6%, according to the draft of the proposal. The government is open to the possibility of financing some projects through debt, Brodjonegoro said.

According to the draft plan, about 17% of the infrastructure spending will go toward energy, followed by 10% for irrigation.

The proposal also calls for the upgrade of as many as 165 existing airports and the development of water-based facilities for seaplanes to access remote islands in the world’s largest archipelago, Brodjonegoro said.

Better infrastructure would also complement the government’s efforts to attract more tourists to help narrow the current-account deficit, which widened to a four-year high in 2018 and pressured the nation’s currency, bond and stock markets.

Separately, the minister said the government will push for certification of the domestically developed N219 propeller plane to support the expanding air-travel and tourism industries in the nation of more than 260 million people. The head of state-owned PT Dirgantara Indonesia, the maker of the aircraft, said May 13 that he expects local regulators to approve the plane this year.