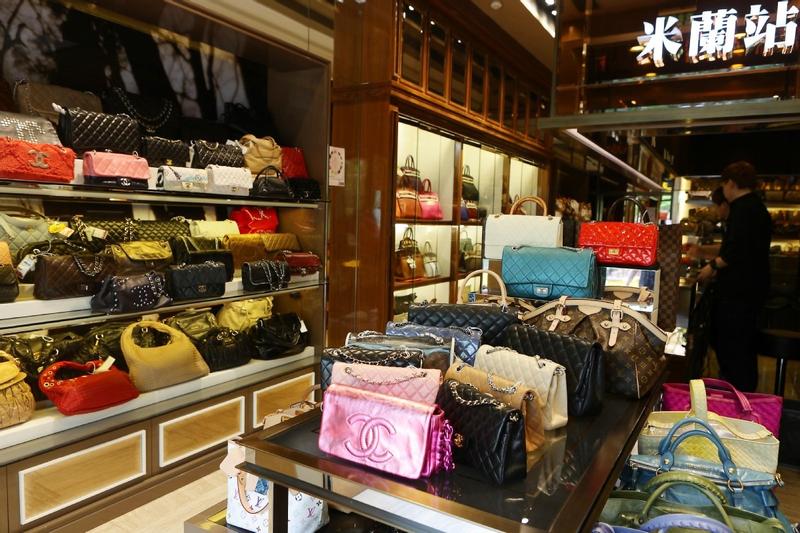 In this undated photo, secondhand luxury bags are sold at a Milan Station store in Shanghai. (PHOTO PROVIDED TO CHINA DAILY)

The secondhand economy, supported by the consumption upgrade and advanced internet technologies, is set to create a trillion-yuan market in China, according to industry insiders.

In the internet era, selling a secondhand smartphone no longer involves face-to-face negotiations.

Today, all you need to do is to put a used phone into a machine that uses big data to determine its value and is able to erase all your personal data.

The secondhand economy in the internet era will "enable more consumers to enjoy added value through new modes of business, advanced technologies and upgraded experiences", according to industry insiders.

One important reason for the market rise is that the consumption upgrade is driving changes in the consumption habits of younger generations, especially those born after 1990

He Fan, Founder and CEO of Huishoubao

According to a report from market consultancy Big Data Research, the market volume of the country's secondhand economy reached 202.54 billion yuan (US$29.5 billion) in the first quarter of this year, a 5.5 percent increase year-on-year.

"One important reason for the market rise is that the consumption upgrade is driving changes in the consumption habits of younger generations, especially those born after 1990," said He Fan, founder and CEO of Huishoubao, an app enabling the recycling of electronic devices online.

They tend to pursue lifestyles and have consumption habits that are more environmentally friendly, sustainable and fashionable, he said.

Another reason, according to Li Renjian from CITIC Capital, is that the use of advanced internet technologies including big data and artificial intelligence has boosted the competitiveness of the whole sector.

Huafer offers new mothers a platform to buy and sell products that their babies no longer need.

"Unlike other secondhand products, those used by new mothers and babies are useful only for a short period of time," said Zheng Xiaowen, CEO of Huafer.

The Beijing-based company has proved a hit. Two years after it was established, the firm has more than 1.9 million registered users and over 80,000 users have made transactions through its platform.

Notably, Huafer is also a shining example of how a platform for secondhand goods can make use of KOLs, or key opinion leaders, and it has cooperated with a string of popular stars to attract more users.

Famous actresses including Sun Li, Xie Na and Deng Sha as well as renowned television presenter Zhu Dan are among those selling their secondhand goods on Huafer.

In addition to being famous, they are also mothers, which boosts their appeal to other users.

"Mothers are seen as loving and trustworthy, which is important for secondhand trading platforms if they want to benefit from word-of-mouth recommendations," Zheng said.

Sun Li, an actress who has appeared in a series of TV dramas including Empresses in the Palace and who is also a mother of two, sells her children's toys, clothes and shoes on the platform.

With most things being in good condition but priced much lower than new items, Sun has successfully attracted more than 1.6 million fans and sold over 1,000 products.

According to a report from leading investment firm Cyanhill Capital, China's secondhand market is growing rapidly at 30 percent year-on-year and is expected to reach a value of 1 trillion yuan next year.

"The market will have great potential in the future compared with developed countries. The market size of used goods in the United States is 2 trillion yuan while in Australia and Canada it is about 200 billion yuan," said the report.

He from Huishoubao agreed. "Compared with developed countries, China's secondhand economy is still at an early stage," He said.

The handset recycling rate in some leading countries, for example, accounts for 40 to 50 percent of total sales, while in China the figure is less than 10 percent.

"The industry will continue to boom over the next three to five years or even more," he predicted.

In the first half of 2019, a total of 6.86 million used cars were sold across China, up 3.9 percent year-on-year. Overall sales hit 43.4 billion yuan, according to the latest data from the China Automobile Dealers Association.

Luo Lei, deputy secretary-general of the China Automobile Dealers Association, said earlier that the booming market is thanks to the central government's decision to remove limits on the flow of used vehicles across regions.

Since last year, China has ramped up efforts to scrap limits on cross-region flow of used cars, as part of the country's broader push to make the automobile industry globally competitive.

"This will encourage consumers to switch cars more frequently and help enterprises to adjust their plans and explore untapped demand," Luo said.

China has about 240 million cars on the road, data from CADA showed, yet about 78 percent are from first-and second-tier cities.

"But demand for used vehicles chiefly comes from consumers in small cities, resulting in huge demand-supply imbalances geographically," according to data from Youxin, an online used car dealer.

To tap into the demand, major car dealers including Renrenche, Youxin and CARS are all gearing up to enter more cities and provinces to boost market share.

Major ride-hailing firm Didi is also entering the market by buying used vehicles directly from Renrenche in a bid to lower costs.

"The transaction volume between the two sides is likely to exceed 2 million vehicles in three years," said Renrenche in an earlier statement.

In June, JD announced plans to inject more than US$500 million into the secondhand platform Aihuishou, which is reported to bring the valuation of Aihuishou to more than US$2.5 billion.

Alibaba Group has invested in Xianyu, a major secondhand firm, while Xianyu's archrival Zhuanhuan is backed by Tencent Holdings Ltd.

With the secondhand market continuing to boom, Zhang Li, head of the e-commerce division at the Chinese Academy of International Trade and Economic Cooperation affiliated with the Ministry of Commerce, noted that the new business model has also brought about many problems.

"Most platforms in the field lack sufficient appraisal procedures, leading to the presence of many counterfeit or fake goods on those platforms," Zhang said in a report.

"Also, as with other e-commerce platforms, sellers have more information than buyers, which results in the frequent occurrence of fraudulent behavior in transactions," Zhang said.

Zhang added that it is also difficult for the government to supervise as the secondhand market involves numerous types of small platforms and applications.