'Time machines' that roam the skies

Private-jet leasing is becoming big business as the world's pool of affluent jet-setters soars. Operator Thomas Flohr tells Duan Ting he wants to turn it into a truly global operation. 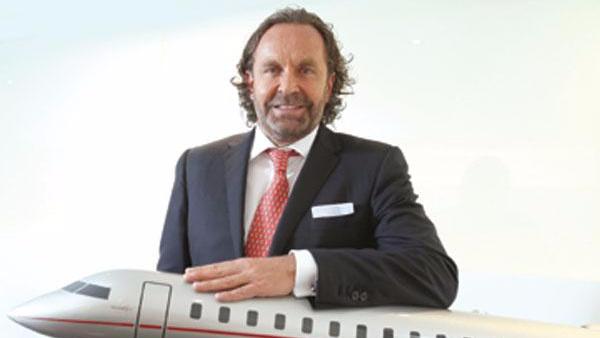 Private-jet operator Thomas Flohr says what came as a surprise for his business in 2016 was the addition of larger corporate clients, plus new customers, including millennials and many from the technology sector. (Parker Zheng / China Daily)

For Thomas Flohr, it's a dream come true - gushing out a service that promises to pick up and drop off clients between any two points, anywhere around the world within the shortest span, and placating those forced to pay through their noses "without knowing what they'll get when they get to an airport".

He runs what he calls congenial "time machines" - an impressive line of sleek, gleaming business jets catering to heads of state, the corporate elite and affluent individual jet-setters to whom time is everything.

Flohr, founder and chairman of Malta-based, global business aviation company VistaJet, has been flying high since 2004 when his enterprise came into being, seeing Asia and the Chinese mainland, in particular, as being among the principal world markets for the private jet-leasing business.

The business is on the fast track, he's convinced, with the mainland's nouveau riche roaming the planet in search of lucrative business deals or for leisure.

VistaJet has covered close to 190 countries and regions to date, and boasts of being the only foreign operator conferred with the right under B registration to operate within China, serving more than 160 destinations in the country, with offices in Shanghai and Hong Kong. Their B-registered aircraft is managed and operated through the partnership with Apex Air.

Its list of creme de la creme mainland clients is long - some two dozen and still growing - according to Flohr. Just last week, the company launched its WeChat public account to hype up its products and serve their Chinese clients.

It's seldom a no-show by VistaJet at some of the world's premier aviation functions, including the 2017 Asian Business Aviation Conference and Exhibition hosted by Shanghai last week, aimed at tapping the growing demand among the mainland's affluent for business and private jets, and attended by some 170 of the world's top business aircraft makers and operators.

Flohr sees Asia as one big region that has been a part of his company's growth initiative from the outset, and they're proud of having armed themselves with a very deep knowledge of this marketplace. VistaJet opened its Asia office in 2008.

"My vision was always to create a truly global business," he tells China Daily. His company had pierced deep into Asia, the Middle East, Africa and Europe, while North America remained the missing link, so he decided to take on the US market in 2013.

Flohr has no regrets about going against advice not to tap the US market, recalling he had been warned many times that he might not make it. "Maybe I had made a mistake listening to them for so long," he says, adding that the US market, instead, had been "extremely receptive" to their products.

By 2016, the US market had seen the highest new subscription hours sold by VistaJet than in any other region, according to Flohr. In less than three years, the US had become the company's top market in terms of new sales, as well in the number of takeoffs and landings by its aircraft.

According to Flohr, no other company has such a vast global aviation infrastructure like's VistaJet's 73 aircraft now in service, having achieved his goal of owning 70 to 75 inter-continental jets providing the most efficient services to clients at the shortest notice anywhere, anytime in the world. The company acquired 15 new planes in 2016.

The ultimate aim, he says, is to offer true global standards of services and bring in more foreign culture - with the company's staff coming from 53 nationalities.

Flohr notes that what they had particularly seen last year was the addition of larger corporation clients, plus new customers, including millennials and many from the technology sector.

He attributes VistaJet's significant growth to the fact it wins market share through the full ownership of the business, plus the strategy of selling subscription hours to clients. He remains the company's major shareholder, with a tiny stake held by his family members and friends.

VistaJet, as a global player in the aircraft leasing industry, also buys airplanes brand new and at the wholesale price, and the economies of scale allows its clients to enjoy the benefits of the private aviation experience at guaranteed hourly rates. "We control the entire end-to-end process. We own the airplane, operation, pilots and infrastructure," says Flohr.

"If it's not your main business, why would you want to buy an airplane? And why not turn to companies like us who work 24 hours for 365 days a year? Our goal is to serve our clients as if they own the airplane, and we fly them at the shortest notice and at the granted hourly rates, which is a comfortable solution that many companies are choosing."

Flohr explains that if a client were to buy an airplane, there'll be a complicated structure of purchases and numerous documents concerning things like purchasing, management and finance issues to be thrashed out. As for how VistaJet differentiates itself from other private-jet leasing companies, Flohr points to three elements - asset-free solution, as the company carries the asset in its portfolio, a global fleet of aircraft which are all identical for a constant level of services anywhere in the world, plus a very simple solution, which is a five-page agreement. "We guarantee the availability, you guarantee the pay."

According to VistaJet, the company's average contract with its clients is 150 to 200 hours, while the charge varies from $11,000 to $17,000 per hour. Flohr says the plan is very much tailored to clients' needs, and the beauty of their program is the access to the entire fleet anywhere, any time their clients want to, and they can also choose the right plane for the mission.

VistaJet continues to aim for year-on-year business growth of 20 to 25 percent this year, according to Flohr, convinced that more subscription hours can be sold.

Digitalization is likely to form a significant part of the company's communication with its clients, and it will invest heavily in digital platforms to make information better available to its fleet around the world.

For the time being, Flohr says he doesn't plan to float the company as it has been financing its operations on its own and, being private, gives it a powerful tool in not having to report regularly to the market. It will also ensure long-term alternative ownership and value for clients.

VistaJet launched the first bond issue by a private aviation company in May, 2015, valued at $300 million, helped by the strength of the company's finances, its executive team's rich experience in the industry and a unique premium service offering.

A bitter experience that helped foster a dream

Thomas Flohr takes great heart in checking on and looking after the welfare of his clients, visiting them and clocking up some 800 hours of flying around the world each year.

Recalling his initiative to launch the business, he says: “I had been using private jets on a rental basis, but I was very unhappy with the quality of aircraft available in the open charter market. It may cost you an arm and a leg, and yet you have no idea of the quality of the service you would get until you arrive at the airport.”

The dismal experience led the founder and chairman of the private-jet operator to buy the first airplane for his own use. With his first jet, he challenged the perception that aircraft should have a home base. He thought a home base was not necessary to make operations more efficient because he could easily pick up a client from whichever airport that’s closest to the customer’s location. So, VistaJet got off the ground in 2004.

Flohr reckons that his earlier working experience — as an executive at an asset finance company that owned a private jet — has enabled him to deal with the company’s business and financing issues, as he could access the jet the company owns. He could see very early the benefits of how much time a private jet creates, and the real value proposition of business jets.

His advice to entrepreneurs is: Spend time on what one can influence and learn from the mistakes one makes and then move on. “Take all your positive energy in the morning and create what you can influence today. Surround yourself with the very best people. And there’s no compromise you can ever make on people.”

Being in charge of their business, people should have a very clear vision rather than being driven by what others say, reckons Flohr. The management should also be open in hiring talented people as they can help take the company to new heights.

Flohr loves business development which can lift the company to the next level, but the best people who can tell where the company should be headed are the clients. Thus, people should listen carefully to what their clients say.

Flohr has a penchant too for outdoor sports and cooking. “One of the things that allows me to relax the most is to go to a store to get some food and cook with friends at home,” says Flohr, who lives in a sprawling chalet in the Alps of his native Switzerland.