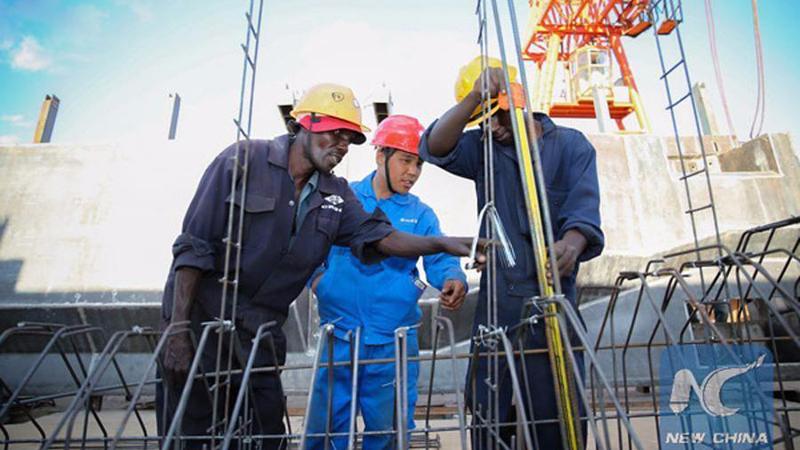 In this March 16, 2015 photo, a Chinese engineer works with Kenyan workers at a T-beam factory on the section six of Kenya's Standard Gauge Railway project, near Makueni, Kenya. (PAN SIWEI / XINHUA)

Chinese investors spent a total of US$86.3 billion on 5,410 enterprises from 160 countries and regions during the period, the Ministry of Commerce (MOC) said in a statement.

During the first 10 months, Chinese companies invested US$11.2 billion in 53 countries along the Belt and Road

"Irrational outbound investment was effectively contained," the statement said, while noting a slightly milder decrease of investment and a better industrial structure.

In the Jan-Sept period, ODI dropped 41.9 percent year on year.

Investment in the first 10 months mainly went to leasing and commercial services, manufacturing, wholesale and retail, and information technology sectors.

No new projects were reported in property, sports or entertainment.

In a document released in August, the State Council said overseas investment in areas including real estate, hotels, cinemas, and entertainment would be limited, while investment in sectors such as gambling would be banned.

Earlier this month, the National Development and Reform Commission released a new draft rule on outbound investment, including stipulations on the investment activities of firms established overseas by domestic companies.

Meanwhile, ODI to countries involved in the Belt and Road Initiative has been encouraged.

During the first 10 months, Chinese companies invested US$11.2 billion in 53 countries along the Belt and Road, accounting for 13 percent of the total ODI, up 4.7 percentage points from a year earlier, the MOC data showed.