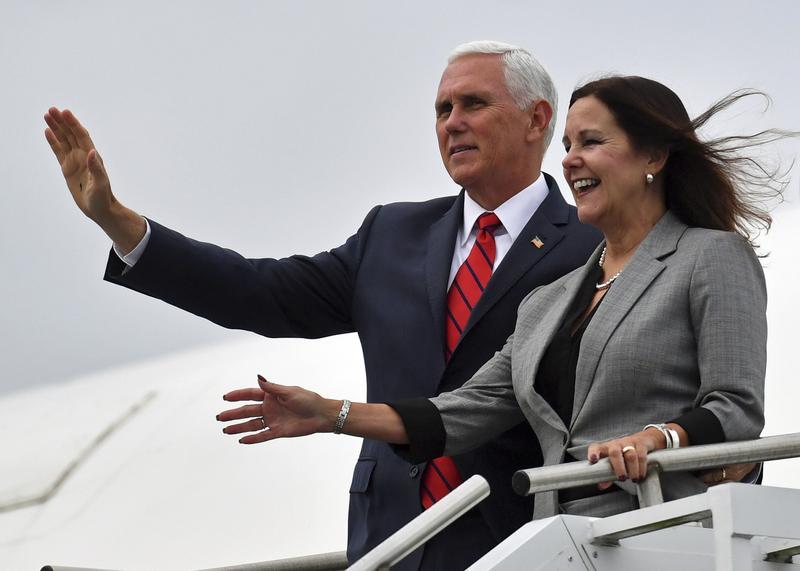 US Vice President Mike Pence and his wife Karen Pence arrive at Shannon airport from Dublin during an official visit to Ireland, Sept 3, 2019. (JACOB KING / PA VIA AP)

REYKJAVIK, Iceland — US Vice President Mike Pence is receiving a tongue-lashing from European allies as he plays understudy to the president on the world stage.

From the Taoiseach of Ireland to the mayor of Reykjavik, leaders have been publicly confronting Pence on issues such as the UK's exit from the EU, nuclear disarmament and climate change.

The appeals appear part of a desperate effort to try to get through to a Trump administration that follows its own norms and rules, and find someone— anyone — who might be able to change the president's mind.

But again and again, Pence has appeared to brush off the efforts, which spilled into public view before he'd even left the airport in Shannon, Ireland.

There, Simon Coveney, the country's foreign minister, confronted Pence with an urgent message about the potential impact of Brexit. He warned a return to hard borders between Ireland and Northern Ireland would not only disrupt commerce, but could also threaten a fragile peace.

"As somebody who understands Ireland well, I think you understand why it's such an emotional issue," Coveney said, trying to leverage Pence's personal connections to the country. "It's a huge issue for this country right now. It's dominating politics here. It's about trying to mitigate against potential damage."

Pence, appearing less than amused by the public confrontation, said he was "grateful" for Coveney's "candor" and quickly pivoted. But the pleas continued in Pence's meetings with other Irish leaders, including Taoiseach Leo Varadkar.

"All I ask is that you bring that message back to Washington with you," Varadkar said.

The efforts continued in Iceland Wednesday, with the mayor of Reykjavik pressing him on denuclearization and the prime minister pushing on climate change. They appear driven by a desire to confront the administration as well as, perhaps, a perception that Pence might be more open to persuasion and hold more traditional foreign policy views than the mercurial Trump, who thrives on bluster and believes his unpredictability is one of his greatest assets.

And Pence has appeared increasingly willing to veer from Trump not only on style, but on policy and emphasis. The trip began in Poland at a ceremony commemorating the 80th anniversary of the start of World War II, with Pence filling in for Trump because of Hurricane Dorian.

Pence raised the thorny issue of human rights during a meeting with Polish President Andrzej Duda — something Trump has been criticized for avoiding. And he repeatedly denounced Russian aggression, including the annexation of Crimea, just days after Trump tried to persuade world leaders at a Group of Seven summit to allow Russia to rejoin the group. Russia was expelled from the G-7 for taking Crimea.

"With its efforts to meddle in elections across Europe and around the world, now is the time for us to remain vigilant about the intentions and the actions being taken by Russia," Pence said in another stark contrast with Trump, who rarely mentions Russia's interference in Western elections, including the 2016 race he won.

Those subtle breaks come amid continued rumors — so far widely dismissed — that Trump might consider replacing Pence on the 2020 ticket if he feels his campaign lagging. Pence will soon have to emerge from Trump's shadow if he wants to run for the top of the ticket in 2024.

The White House pushed back on any suggestion of daylight between them.

"The president and vice president speak multiple times a day, have an incredible relationship and are completely aligned on issues and policy," said White House press secretary Stephanie Grisham. She added that Pence "has been an effective messenger for this administration at home and abroad" and that his experience in Congress and as governor of Indiana made him "a natural and valuable negotiator for the president on any number of priorities."

Indeed, Pence appeared more than willing to make clear the president's stances. Instead of assuring Irish leaders that he would press their case when he meets Thursday with UK Prime Minister Boris Johnson in London, Pence effectively backed Johnson's hardline position in remarks in Dublin that drew audible alarm from the Irish press.

He largely ignored other provocations, including from Iceland Prime Minister Katrin Jakobsdottir, who was at one point going to be out of the country for Pence's visit. The vice president had said he'd made the trip to discuss economic and security cooperation, including responding to China and Russia's "incursions" into the Arctic.

But as the two headed into their closed-door meeting, Jakobsdottir made clear she had other priorities: The two would discuss the "greatest threat to the Arctic, which is the climate crisis," she said.

Pence was also confronted earlier by Reykjavik's mayor, Dagur Bergþóruson Eggertsson, after receiving a tour of the famous Hofdi House, where US President Ronald Reagan and Soviet leader Mikhail Gorbachev had their famous 1986 meeting.

With reporters huddled and with cameras rolling, the mayor bemoaned the US pullout from the 1987 Intermediate-Range Nuclear Forces Treaty, stressing the importance of nuclear disarmament and offering up the venue for future talks.

READ MORE: Pence calls for putting Americans back on moon by 2024

The mayor, meanwhile, told reporters that Pence's private reaction to his push had been "positive," noting a desire to bring not only Russia, but also China and India, to the table.

He then offered a quote from John Lennon: "You could probably say that I'm a dreamer, but I'm not the only one."