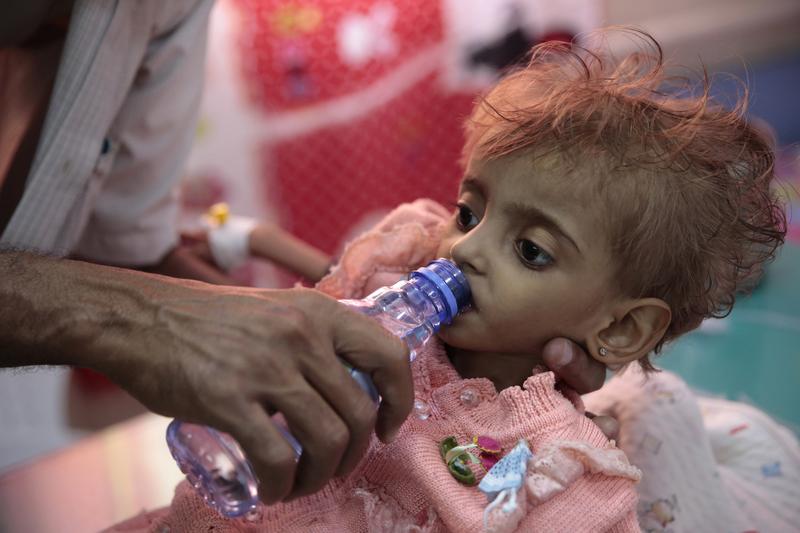 In this Sept 27, 2018, photo, a father gives water to his malnourished daughter at a feeding center in a hospital in Hodeidah, Yemen. (HANI MOHAMMED / AP)

UNITED NATIONS — The UN humanitarian chief says the conflict in Yemen has left 8.4 million people dependent on emergency food assistance and 75 percent of its 22 million people requiring some form of aid.

"We are already seeing pockets of famine-like conditions, including cases where people are eating leaves"

Mark Lowcock warns in an analysis obtained Monday night by The Associated Press that humanitarian officials "estimate that 3.5 million to 4 million more people could become severely food insecure in the months ahead."

The analysis, which is to be the subject of a briefing to the Security Council on Tuesday, says 3 million Yemenis are malnourished, including 1.1 million pregnant women "and more than 400,000 severely acutely malnourished children."

In a worst case scenario, Lowcock warns that if current trends continue, food needs could increase "by as much as 62 percent."

The conflict in Yemen, the Arab world's poorest country, began with the 2014 takeover of the capital, Sanaa, by Houthi Shi'ite rebels, which toppled the internationally recognized government. A Saudi-led coalition allied with the government has been fighting the Houthis since 2015.

ALSO READ: UN aid chief: Fight against famine is being lost in Yemen 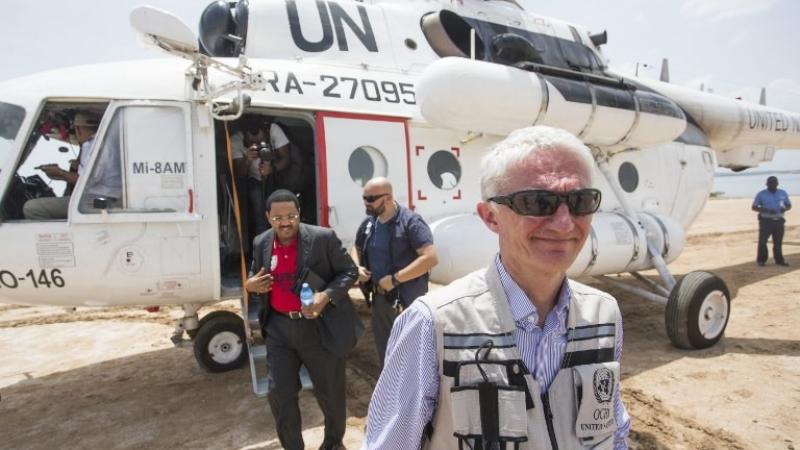 Deputy Secretary of the United Nations Office for the Coordination of Humanitarian Affairs (UNOCHA) Mark Lowcock (right) and Special Representative of the United Nations Mission for Justice Support in Haiti Mamadou Diallo (left) disembark from a helicopter in Fort Liberte during a visit to North East Haiti on July 3, 2018. (PIERRE MICHEL JEAN / AFP)

Civilians have borne the brunt of the conflict, which has killed over 10,000 people and sparked a cholera epidemic and humanitarian crisis.

At the beginning of 2017, the UN and its partners were able to provide aid to 3 million hungry Yemenis. But since then, they have scaled up assistance, reaching 8 million people last month because of generous funding from donors, Lowcock said. But increased funding is needed now to meet the "projected increases in needs."

He also urged combatants to allow easier access for aid operations and an expansion of commercial imports.

Lowcock warned the council on Sept 21 that the fight against famine was being lost and said the situation had deteriorated "in an alarming way" in previous weeks.

"We may now be approaching a tipping point, beyond which it will be impossible to prevent massive loss of life as a result of widespread famine across the country," he said. "We are already seeing pockets of famine-like conditions, including cases where people are eating leaves."

Lowcock's new analysis was sent to the council to comply with a Security Council resolution adopted in May asking for swift reporting on "the risk of conflict-induced famine and widespread food insecurity."

He said a major conflict-related factor affecting the availability of food is the loss of household income, citing World Bank estimates that Yemen's economy has contracted 50 percent since the start of conflict, with at least 600,000 jobs lost, mainly in agriculture and the service sector. 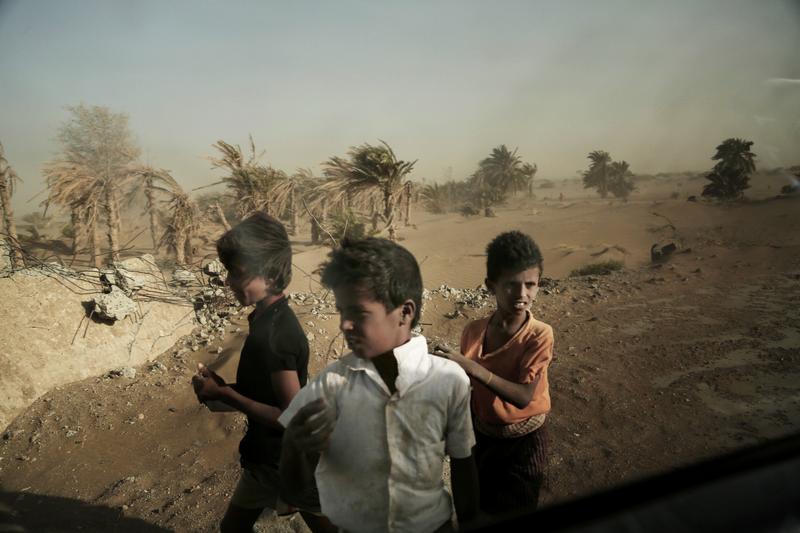 Another major factor, Lowcock said, is the depreciation of Yemen's currency, the rial, which has lost 47 percent of its value against the US dollar in the past year, including 20 percent since September.

"In the last six weeks, the price of the basic food basket has increased 25 percent and is now more than twice pre-crisis levels," he said. "The currency crisis has also forced the price of fuel up by 45 percent" which is impacting transport, water, electricity, health and sanitation services.

Lowcock said approximately 80 percent of food and other basic commodities for the Houthi-controlled north enter Yemen through the ports of Hodeida and Salif. But while imports have substantially increased since the Saudi-led coalition lifted a blockade in late 2017, he said monthly volumes are between 16 percent and 20 percent lower than pre-crisis levels.