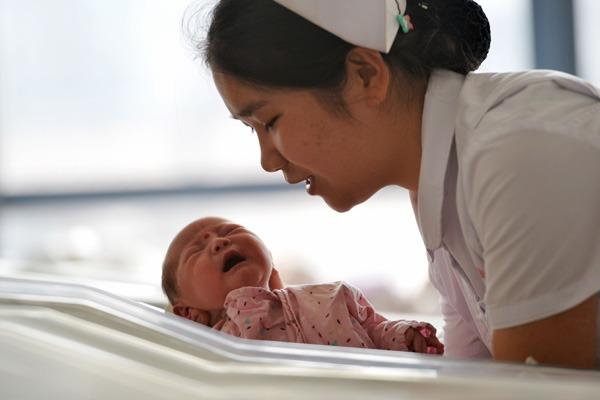 The number of births in China continued to fall last year, the third year since the implementation of a national policy to encourage couples to have two children, a population researcher affiliated to China's top health authority said.

The number of births for 2018 is estimated at between 15 and 16 million, but the figure is not surprising, Huang Kuangshi of the National Health Commission's China Population and Development Research Center told China Daily on Thursday.

The number of births for 2018 is estimated at between 15 and 16 million, but the figure is not surprising

That's because without the encouragement, the downturn would have been even more pronounced.

China adopted the second-child policy to encourage all couples to have two children at the start of 2016 to counter population aging and the country's dwindling workforce. The number of births jumped to 17.86 million that year, the most since 2000, but faded to 17.23 million in 2017, according to the National Bureau of Statistics.

Figures for 2018 have not been released, but some population experts predicted it is almost certain the number of births will have continued to fall－with the same pattern predicted for this year and the next few years to come－largely due to the dwindling number of women of childbearing age in China.

"The major causes for the falloff in births last year included a decreasing number of women of childbearing age and many women born after 1990 delaying marriage and family," Huang said.

The number of women of childbearing age in China fell by 5.5 million last year from 2017, the biggest decline in recent years, he said.

Births in China will continue to fall steadily over the long term, and the total population will start to decline around 2030, Huang said, though the number of births this year and next may be slightly higher than last year, he said.

The number of women of childbearing age in China fell by 5.5 million last year from 2017, the biggest decline in recent years

Zhai Zhenwu, president of the China Population Association, said the number of births for 2018 is likely to be between 15 million and 16 million.

"This resulted in fewer women born after 1990, who are and will be the primary group to give birth, so fewer babies will be born."

Zhai said the universal second-child policy greatly eased the decline in births over the past few years.

"Without the policy, the annual number of births would have been far lower than 15 million," he said.

The decreasing number of births means a shrinking workforce in China in the future, but that should not cause panic considering the country's large population and slow pace of birth decline, Zhai said.

Even by 2050 the workforce－people between 15 and 59－will stand at 700 million, which is still equivalent to the total workforce of all developed countries combined, he said.

"The challenges caused by a decreasing workforce can be met by increasing the quality of the workforce and people's productivity," he said.

Huang, of the China Population and Development Research Center, said the government should improve its policies related to births to address the economic concerns of couples who want to have one or two children, so more parents dare to have children and don't have to worry about raising them.