A day of frustration for city commuters 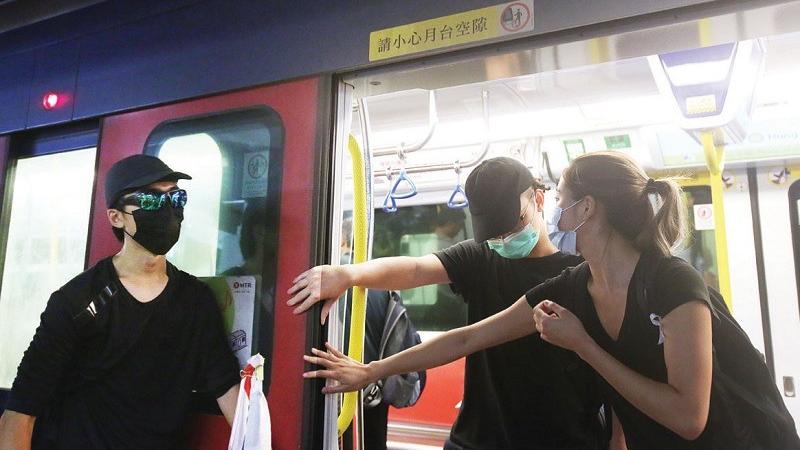 Protesters block a door of an MTR train at the Hung Hom station during rush hour Aug 6, 2019. (PHOTO / CHINA DAILY)

Hong Kong was plunged into chaos again on Monday as a general strike followed another weekend of violent protests, paralyzing transportation, leading to more than 70 flight cancellations and bringing the city to an unprecedented standstill.

Commuters struggled to get to work during the Monday-morning rush hour, when many rail and bus services were suspended, while some activists blocked trains from leaving stations, some by sitting between train doors, in the latest round of protests.

Clashes broke out at several MTR stations. Some passengers were seen scolding radical protesters on the platform, urging them to refl ect on their behavior. Some shouted at the masked protesters, calling them “rioters”. Some quarrels then turned into brawls.

These protesters have no respect for other people. Many people in Hong Kong don’t want to strike. How can these protesters force others to? Who gives them the right?

Nancy Huang, 23, a recruitment consultant and Tai Wai resident, said she had planned to reach her Wan Chai office before 8:30 am but was stranded at the Tai Wai MTR station till 11 am. “It’s too inconvenient and I feel so tired. The station is full of people, and I was trapped there for nearly fi ve hours,” she said.

Another Tai Wai resident, 26-year-old Susan Tso, didn’t manage to reach her workplace at Sai Ying Pun before 11:30 am. She had planned to clock in by 9:30 but waited at the Tai Wai station for about an hour before deciding to take a bus instead.

“There are still about 100 people waiting ahead of me,” Tso said. “These protesters have no respect for other people. Many people in Hong Kong don’t want to strike. How can these protesters force others to? Who gives them the right?” she said, adding that no one is above the law.

Long lines of traffic could be seen across Hong Kong Island leading into the heart of the business center, and hundreds of people were stranded at the airport. Roads into the main arteries of Hong Kong were paralyzed.

Ng, a 50-year-old office worker living near Central who didn’t want to give his full name, faced a long commute to his Tsim Sha Tsui office because part of the Tsuen Wan line was blocked by protesters in the morning. He said the citywide strike completely disrupted his work schedule.

For Chloe, an intern at a media company in Aberdeen, getting to work on Monday took four hours - three hours longer than usual. She had been in a bus line for about two hours until about 1 pm, when she learned that train service had resumed.

A businessman surnamed Chan who took the subway from Tsim Sha Tsui to Central said the strike caused trouble for wage earners as most of the city’s public transportation had ground to a halt.

According to the Civil Aviation Department, 77 flights had been canceled due to the strike as of 2 pm. Air traffic volume started to pick up in the afternoon.

The metro resumed normal services around noon. However, road traffic was still disrupted from time to time during the day.