China says 'Made in China 2025' in line with WTO rules 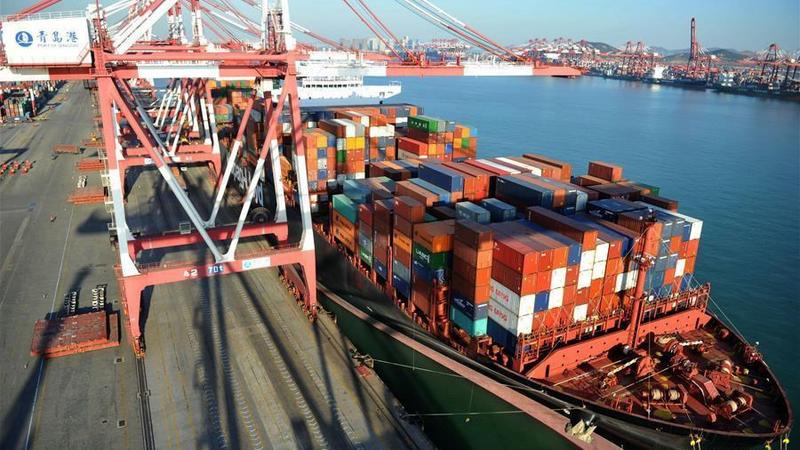 In this Jan 12, 2018 photo, a freighter anchors at a dock in Qingdao, east China's Shandong province. The Office of US Trade Representative on April 3, 2018  published a proposed list of Chinese goods subject to additional 25 percent tariffs amid strong opposition from China and US business groups. (YU FANGPING/ XINHUA)

BEIJING – The "Made in China 2025" strategy should not be used as an excuse for unilateral measures as it does not go against China's obligations to the World Trade Organization (WTO), according to a top commerce ministry official.

"The strategy is transparent, open, and non-discriminatory. Not only Chinese companies but also foreign firms can participate in it," Vice Minister of Commerce Wang Shouwen said at a press conference Wednesday.

China and the United States should properly settle trade disputes, including issues on intellectual property protection, via consultation on the basis of equality.

The "Made in China 2025" strategy, a plan to upgrade the manufacturing sector, was reportedly a source of concern in the US Section 301 investigation into alleged Chinese intellectual property and technology transfer practices, launched by the Trump administration in August 2017.

Wang said China completed rigorous compliance reviews on the strategy when it was rolled out, and it was made in line with WTO rules.

The targets set in the strategy are of predictive and instructive nature, and are not mandatory tasks, Wang said.

Similar plans had been rolled out previously by many countries including the United States, Wang said.

Vice Finance Minister Zhu Guangyao said China's rapid development is a result of reform and opening-up. China made big strides in the field of intellectual property with a focus on talent and innovation, said Zhu.

China and the United States should properly settle trade disputes, including issues on intellectual property protection, via consultation on the basis of equality, Zhu said.

China will place intellectual property protection as a top priority in its innovation-driven development, Zhu said.

On Wednesday, China unveiled a list of products, including soybeans, automobiles, and chemical products, worth US$50 billion imported from the US that will be subject to higher tariffs.

The Customs Tariff Commission of the State Council has decided to impose additional tariffs of 25 percent on 106 items of products under 14 categories, the Ministry of Finance (MOF) said in a statement on its website.

The move was taken after the US administration announced a proposed list of products subject to additional tariffs, which covers Chinese exports worth US$50 billion with a suggested tariff rate of 25 percent.

The date of implementation will depend on when the US government imposes the tariffs on Chinese products, the MOF said.