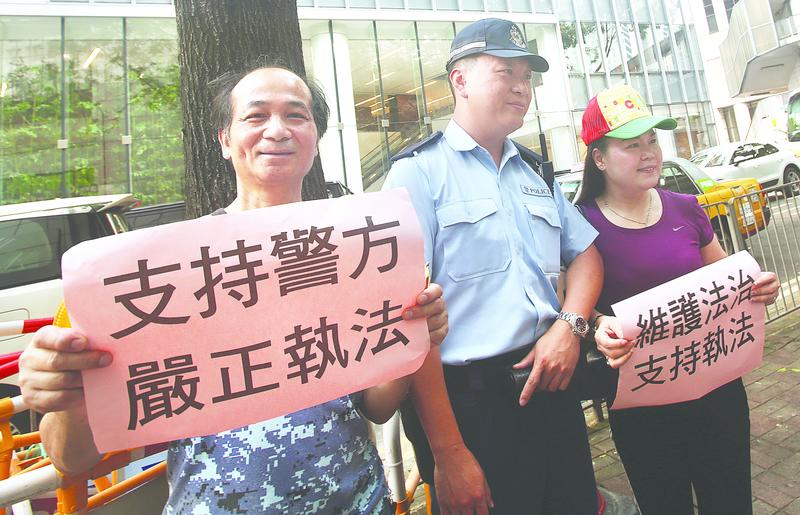 Various sectors of Hong Kong voiced their support on Friday for the city’s police force, noting its professional and restrained manner against premeditated radical protest against the government bill to amend the city’s extradition laws.

Their remarks came after radical demonstrators paralyzed Hong Kong’s core administrative and business area on Wednesday in an attempt to derail deliberation of the bill in the Legislative Council.

The clashes soon turned into a riot after radical protesters hurled bricks, metal poles, planks and metal barricades at police. Deliberation of the bill was subsequently canceled, and it is unknown when it will be rescheduled, as LegCo’s summer recess around mid-July approaches.

The police were forced to use nonlethal weapons, including batons, pepper spray, tear gas, bean bag rounds and rubber bullets, to disperse the well-organized crowd charging at cordons.

Wong Lai-yin, vice-convener of the local community New Millenarian, said Hong Kong police are among the world’s most restrained law enforcers, and that they turned to the use of force only after protesters ignored repeated warnings and continued to violently charge the cordons.

She spoke highly of the police officers’ professionalism in handling the rioting.

Wong noted that only a small group of protesters with ulterior motives were leading the riot and inciting youngsters, while most people of Hong Kong are rational.

She hoped opponents of the extradition bill can express their opinions in peaceful ways.

Noting that police were performing their duties in an extremely tough and chaotic situation, the Hong Kong Federation of Trade Unions, the city’s largest labor group, expressed its respect and support for the disciplinary force.

In a statement on Friday, the federation said that the police were safeguarding the city’s public security and order in the face of outrageous rioters equipped with dangerous weapons.

It called on all people in Hong Kong who long for a peaceful and orderly society to unite and support the special administrative region government and the police.

Regina Ip Lau Suk-yee, legislator and chairwoman of the New People’s Party, strongly condemned the violent behavior of some of the demonstrators. Ip said the police have been doing their best to maintain public order and safeguard the safety of people inside the LegCo Complex.

She called on parents and teachers not to encourage young people to join violent protests, and expressed sympathy to all who were injured in the protest, including police officers, journalists and demonstrators.