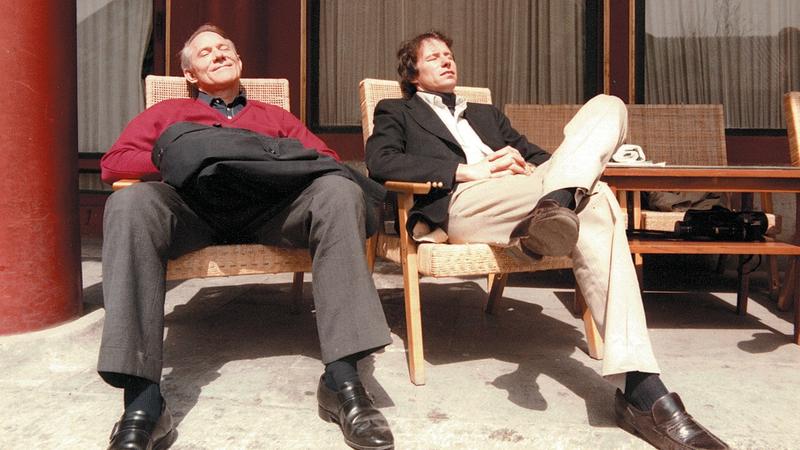 Don Bonker (right) and Joel Pritchard, then both US congressmen representing the state of Washington, enjoy a peaceful sunny moment during a trip to China in April 1980 as members of a congressional delegation, believed to be the first one from the US Congress to visit China since the two countries established diplomatic relationship in 1979. (PHOTO / CHINA DAILY)

Five years into representing the state of Washington in the US Congress in the late 1970s, Don Bonker got a rare treat: a visit to China, a country once regarded by the United States as the "red enemy" and eventually considered its new friend.

"What's amazing is the growth of private sector companies, many now leaders in the global economy."

Bonker landed in China on the official US Air Force plane in April 1980－less than one and half years after the two countries established diplomatic relations in January 1979－along with five other congressmen from committees that oversaw the bilateral relationship.

The delegation, believed to be the first to visit China since the normalization of relations, was organized by the House Foreign Affairs Committee, according to Bonker, who at the time chaired the Subcommittee on International Economic Policy and Trade.

Now in his early 80s, Bonker still remembers what China looked like then.

"The US-China normalization of relations was an eye-opener. We had knowledge of China's glorious history but were stunned by what we witnessed in each of the cities we visited, Beijing, Shanghai and Hangzhou. On the streets, no vehicles, and people mostly wore masks, probably due to pollution. There were no prominent hotels or restaurants," says Bonker.

Bonker's wife, Carolyn, who accompanied him on the trip, still keeps the bilingual pamphlet from where they stayed in Shanghai, the Jin Jiang Hotel, then the best in the city, and the elaborately decorated bilingual menu from a banquet hosted by then Shanghai mayor.

Although China at the time looked gray and backward with bicycles everywhere and facilities in dire condition, everyone on the trip could feel there was something powerful just waiting to be unleashed, Bonker says.

"You could just tell."

A nation of the size and a population of that scale, with the "cultural revolution" (1966-76) behind it, was bound to restore itself to the greatness it once had, he adds.

The spirit of the Chinese people has stayed in his memory. Sitting in a bus stuck in traffic along the famous Bund road of Shanghai, Bonker and the delegation found that they were suddenly surrounded by thousands of Chinese people, most of whom had rarely seen foreigners, staring at them. They were all in military-like attire, looking curious but cautious.

Suddenly, Charles Vanik, the then chair of the powerful House Ways and Means Subcommittee on Trade, opened the bus window and started singing the popular song from the Disney movie Song of the South: "Zip-a-dee-doo-dah, zip-a-dee-ay, my, oh, my, what a wonderful day."

Everyone on the bus joined in, singing along. Then the magic happened.

"We witnessed a sea of smiles that spread throughout the crowd. It was a delightful few minutes, as smiles replaced the otherwise grim faces," recalls Bonker.

In a heavy album of their China trip, there is a photo that Bonker likes the most: a child asleep on the shoulder of an adult, a scene they captured on a street. His wife wrote a caption under it: "China is truly a sleeping giant awakening."

Bonker says, "My wife really had the vision to predict China's future."

The couple experienced one "awakening" of China firsthand.

While taking a stroll in Shanghai, the delegation was approached by a young man, who invited the group to his parents' small apartment for dinner. A few years later, as China was opening up to the world, the same young man came to the American University in Washington to study and was welcomed as a regular guest at the Bonkers' apartment on many occasions.

"We treated him like our family. He was very committed to his education here," says Bonker.

In 2018, Bonker returned to Shanghai as a member of a delegation organized by the US Association of Former Members of Congress. That same young man, David Jin, former CEO of Philips Healthcare China and now chairman and president of Harman International, hosted the group in one of the most prestigious business clubs in Shanghai, a city that had completely transformed from the one Bonker had visited 38 years earlier.

Another former US congressman, Tim Roemer of Indiana, was also in the delegation.

After leaving Congress in 1989, Bonker founded the nonprofit International Management and Development Institute, promoting collaborations between the US and European nations. He also served as an executive for APCO Worldwide, a public relations firm that has established itself in China, serving top Chinese companies and helping the Bonkers visit China from time to time.

"What's amazing is the growth of private sector companies, many now leaders in the global economy. Even SOEs adhere to market economies and are often more accountable to banks than to ministries. China still embraces communism, but it has entrepreneurial talent that is unmatched in the 21st century," says Bonker.

While in Congress, he also served on the President's Export Council, authoring significant trade legislation. He has published a book titled America's Trade Crisis.

Trade, Bonker says, is his subject and he's been paying particularly close attention to the current trade dispute and negotiations going on between China and the US.

"The US should focus on increasing its exports to China instead of trying to suppress imports from there," Bonker says. "Exports to China have generated numerous jobs in the US and raised the living standard of Americans. Now exports are being hurt significantly by tariffs, which hurt jobs."

He continues: "Both countries have strong, charismatic leaders, but it is China that is patient and has the long view. The bottom line is China is surpassing the US as the global leader, and for many US government and policy leaders, it is disturbing."

Bonker is working on a new memoir, Dancing to the Capitol, which he hopes will come out in a few months.

"I know the Chinese like the hugely popular TV soap opera House of Cards. My book does not offer that kind of excitement, but it does have a lot of entertaining anecdotes about how the US Congress works," says Bonker.