By Chen Jia and Dong Yuwen 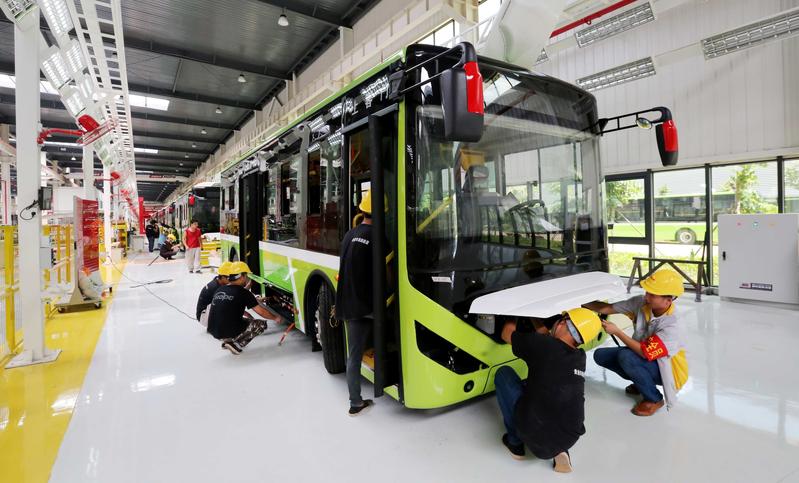 In this undated photo, employees work on a production line of Hope Automobile in the Guangxi Zhuang autonomous region. (TAN KAIXIN /CHINA DAILY )

As recently as 1990, just a quarter of Chinese lived in urban areas. But by the end of 2017, that had shot up to nearly 60 percent. It's the largest urbanization ever seen in history, requiring whole new cities built where there were once small villages.

To shape this expansion, urban planners are increasingly turning to data, to check that development is happening in the right way.

"Like physical examinations for people, cities in China also need a full-scale checkup to find out what the key problems are," explained Zhou Muzhi, head of Cloud River Urban Research Institute and a professor of economics at Tokyo Keizai University.

One such checkup is the China Integrated City Index, launched in 2016 jointly by the Cloud River Urban Research Institute, an international think tank, and the National Development and Reform Commission's development planning department.

Beijing, Shanghai and Shenzhen, Guangdong province, continued to top the latest list, published in December 2018, as they have every year since its launch.

According to the 2018 research report, which swelled to include 298 entries, Shanghai scored higher than Beijing for its economy, but Beijing ranked higher than Shanghai on social and environmental aspects.

On the environment side, Shenzhen heads the list, followed by Sanya and Haikou in Hainan province; Beijing ranked fifth and Shanghai eighth. Beijing was helped by the fact that its air quality improved remarkably in 2018. City managers were also found to be considering environmental effects much more before they launched big infrastructure projects, according to the research.

However, experts pointed out how China's megalopolises continue to outpace smaller cities. Chinese urban development is showing stronger scale effect, and the divergence between large and small cities is growing, said Zhou Muzhi.

For example, in terms of GDP, the top 30 cities in the index contributed 42.5 percent of the country's total GDP in 2018. They also have 69.7 percent of all the Chinese public companies, showed the research.

Unbalanced development among different regions has long been a challenge for Chinese urban planners, even since the beginning of the country's urbanization process. As cities grow, they become economic hubs, increasing their wealth, and the wealth of the regions around them. However, they also risk sucking in talent and resources from less populated areas. The concept is called a city's "radiant ability".

How to balance development in different regions and reduce costs from the diverse range of local administrative programs could be one of the major challenges for city managers, said Zhou Qiren, a professor of the National School of Development at Peking University.

"Radiant ability is a crucial factor for urban development", which will help to form networks among neighbor cities and effectively share resources, he said.

To reflect the trend of centralized and clustered urban development in China, the China Integrated City Index 2018 continued to use the concept of Densely Inhabited District, which was first introduced in the 2017 edition. It refers to districts with a population density of more than 5,000 inhabitants per square kilometer.

The 2018 result showed that population density has a strong positive correlation with social and economic development, but can also bring some negative effects to an area's environmental quality and ecosystem.

"To some extent, Chinese people always overemphasize the negative influences of high population density on the environment, but neglect the importance of its positive effects," said Zhou Muzhi. "High-quality urban clusters will be a crucial driving force of China's urbanization process," he asserted.

The comprehensive index system is made up of nine sub-dimensions with 27 indicator groups, amounting to 178 base-level indices. The data have been divided into 785 categories giving plenty of figures for analysts to pour over.

All the data are collected through three major ways: official statistics (30 percent), satellite remote sensing (30 percent) and the internet (40 percent).

"City construction needs theories and the comprehensive research framework of the China Integrated City Index, which indicates what should be done in urban governance, using data analysis," said Zhao Muzhi.

"All the indices could show Chinese urbanization designers how to plan urbanization in the future. The research results are thought-provoking, leading us to consider whether China's urbanization process should keep advancing along the current path, or to revise the model in a more rational way," he added.

Zhao Qizheng, former minister of the State Council Information Office, agreed. In a message sent to the report's publishing event, he warned that before planners make sophisticated city development and management plans, it is necessary to research and analyze the actual situation in cities, using a comprehensive index system.

Experts predicted China's urbanization to continue, albeit with a higher focus on high-quality development.

Yang Weimin, former deputy head of the Office of the Central Commission for Financial and Economic Affairs, said urbanization is able to provide a sustainable driving force to Chinese economic growth for the following years.

However, the Chinese urbanization process should focus more on balancing development among the economy, human resources and the environment, he added.