DPRK turns up heat on Trump, calls him 'dotard' again 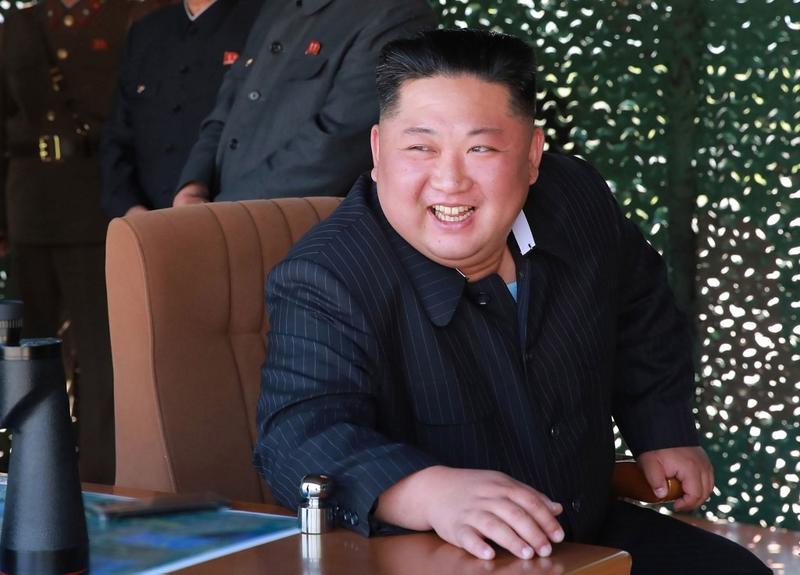 This May 9, 2019 picture shows Kim Jong-un attending the strike drill of defense units of the Korean People's Army (KPA) in the forefront area and on the western front of the Democratic People's Republic of Korea. (KCNA VIA KNS / AFP)

The Democratic People’s Republic of Korea may be preparing to conduct engine tests at a long-range rocket launch site, stepping up pressure on US President Donald Trump ahead of a year-end deadline it imposed to get a better deal from the US in nuclear disarmament talks.

A satellite image from Thursday shows activity at its Sohae Launch Facility, which leader Kim Jong-un had once said he dismantled in a concession to Trump. The move comes as the two sides have revisited old insults -- “Rocket Man” from Trump and “dotard” from the DPRK -- while Pyongyang said Washington’s behavior will determine what “Christmas gift” it gets from Kim.

The commercial satellite image shows activity at the Sohae facility that includes what appears to be a newly arrived shipping container at the engine test stand, according to Jeffrey Lewis, director of the East Asia Nonproliferation Program at the Middlebury Institute of International Studies, who works with the US-based imaging company Planet Labs.

“This isn’t the Christmas gift that North Korea promises, but it is a lump of coal in Trump’s stocking,” said Lewis, a specialist in analyzing in satellite imagery. He added “this is one more sign that we’ve reached the end of diplomacy and a return to missile testing.”

The DPRK’s deadline puts one of Trump’s biggest foreign policy achievements on the line just as he gears up for re-election. Kim has demanded Trump ease up on sanctions choking his country’s paltry economy and end what Pyongyang sees as Washington’s “hostile intent” toward it.

The Republic of Korea’s Defense Ministry didn’t immediately respond to a request for comment on the satellite imagery. Engine testing helps the DPRK develop weapons of a more threatening nature to the US and regional allies including the ROK and Japan.

Kim placed a moratorium about two years ago on the testing of nuclear weapons and intercontinental ballistic missiles that could deliver a warhead to the US to help his talks with Trump.

But the bonhomie has been tested this week, with Trump reviving his derisive “Rocket Man” nickname for Kim and again threatening to use military force against the DPRK. One of Pyongyang’s top nuclear envoys, who once praised the “mysteriously wonderful” chemistry between the leaders, slammed Trump for using words that had prompted “waves of hatred” among the DPRK people. She also dusted off an old insult the state has used for Trump.

Any shift by Kim Jong-un could come as soon as the DPRK leader’s annual New Year’s address, which he has previously used to ratchet tensions up and down

“If any language and expressions stoking the atmosphere of confrontation are used once again on purpose at a crucial moment as now, that must really be diagnosed as the relapse of the dotage of a dotard,” Choe Son-hui, first vice-minister of foreign affairs, was quoted Thursday as saying by the state’s official Korean Central News Agency.

The ROK's unification ministry said the DPRK and the United States seemed to still have differences in negotiations for the denuclearization of the Korean Peninsula.

Kim Eun-han, a deputy spokesperson of the unification ministry, told a press briefing that it seemed that the DPRK and the United States still had differences in positions for denuclearization negotiations, considering the statements recently announced by the DPRK.

Any shift by Kim Jong-un could come as soon as the DPRK leader’s annual New Year’s address, which he has previously used to ratchet tensions up and down. The ruling Workers’ Party announced a rare meeting in Pyongyang later this month “to discuss and decide on crucial issues” due to the “changed situation at home and abroad.”

While Trump and Kim have held three face-to-face meetings since June 2018 and lavished praise on each other over the past two years, they’ve achieved little beyond a vague promise to “work toward complete denuclearization of the Korean Peninsula.” The DPRK has continued to expand a nuclear weapons program that it sees as a vital deterrent against the threat of American invasion.

Still, North Korea may not want to push Trump too far even as they pressure him for more concessions, according to Yoo Hoyeol, who teaches North Korean studies at Korea University and formerly advised South Korea’s unification ministry and defense ministry. He described the comments from Choe, the North Korean foreign ministry official, as “moderated.”

“Trump may be the most favorable US president for North Korea,” Yoo said. “So the North probably doesn’t intent to go further to the very extreme.”