China, US extend trade talks as Trump meets Liu He 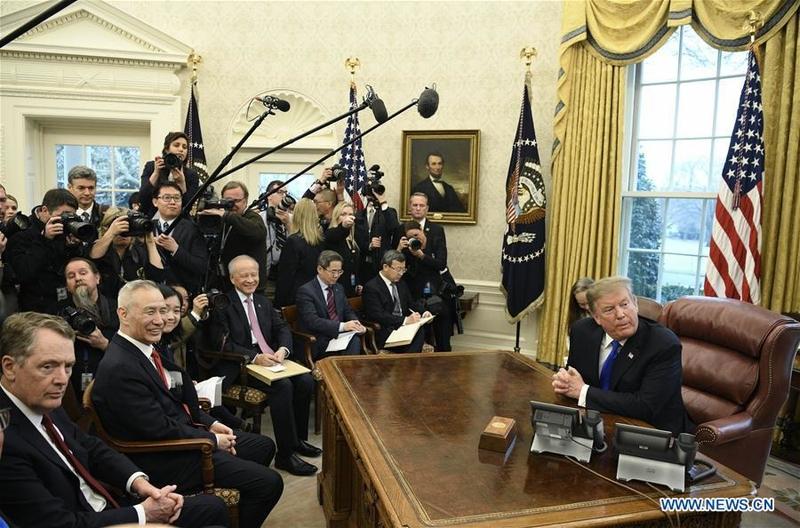 WASHINGTON - US President Donald Trump on Friday afternoon met with Chinese Vice-Premier Liu He at the White House over bilateral ties and the ongoing bilateral trade talks.

Liu is in Washington DC for the seventh round of high-level economic and trade talks between the world's top two economies that started on Thursday. He is also visiting the United States as the special envoy of Chinese President Xi Jinping.

Liu first conveyed Xi's message to Trump. The Chinese president said the two nations' trade teams have recently been implementing the consensuses he reached with Trump in December in Argentina, and have carried out intensive economic and trade consultations.

Xi said these discussions have achieved good progress and have been well received by the two nations and the international community at large.

The Chinese president said he hopes the two sides would maintain the spirit of mutual respect and win-win cooperation, make further efforts and meet each other halfway, so as to reach a mutually beneficial and win-win agreement.
READ MORE: More outcomes expected from US-China trade talks

Xi said that he is willing to keep close contact with Trump via all channels. On behalf of himself and his wife Peng Liyuan, Xi also extended sincere greetings and best regards to Trump and his wife Melania.

During his meeting with Trump, Liu said his ongoing visit to the United States as Xi's special envoy aims to further implement the consensuses reached by the two presidents, and to push for further progress in the trade talks.

Over the past two days, the two teams have engaged in productive talks, and achieved good progress in such areas as balance of trade, agriculture, technology transfer, protection of intellectual property rights, and financial services, said Liu, who is also a member of the Political Bureau of the Communist Party of China Central Committee and chief of the Chinese side of the China-US comprehensive economic dialogue.

Liu said both teams will redouble their efforts and speed up consultations in the next stage, so as to fulfill the great responsibilities placed on their shoulders by the two presidents.

For his part, Trump said he appreciates Xi's message, and asked Liu to convey his warmest regards to Xi and his wife Peng Liyuan, as well as to the Chinese people.

He stressed that his relationship with Xi is close and strong.

The US-China relationship is extremely important and is currently "very good," Trump said, adding that "great progress" has been made in the past two days of talks, while there is still work to be done.

The two sides decided to extend the talks by two days till Sunday.

He said that he believes that the two parties would eventually reach a deal that is both "meaningful" and "good for both countries."

With the current round counted in, there have been three rounds of talks between the two sides in less than a month since the end of January

He is looking forward to meeting Xi again in the near future and jointly witness a historic moment in bilateral trade and economic relations.

China and the United States on Thursday morning kicked off the seventh round of high-level economic and trade talks, as negotiators strived to beat a 90-day deadline that ends on March 1.

The ongoing round of talks came on the heels of the just-concluded round held in Beijing on Feb 14-15, and the working-level consultation between the two sides started here earlier on Tuesday.

Altogether, these discussions aimed to resolve outstanding issues regarding the economic and trade relations between the world's two largest economies.

With the current round counted in, there have been three rounds of talks between the two sides in less than a month since the end of January, despite the week-long Lunar New Year holidays in China and George Washington's Birthday long weekend here in the United States.

During the last round of talks, the two sides reached consensus in principle on major issues, and had specific discussions about a memorandum of understanding on bilateral economic and trade issues.

After months of escalating trade friction involving massive extra tariffs on imports from each other, Xi and Trump agreed on Dec 1 last year that the two countries should manage to reach a mutually beneficial and win-win agreement within 90 days to break the impasse.

The trade standoff has had negative impacts on both economies and added much uncertainty to global markets and the world economy.

During a meeting with the US delegation last week, the Chinese president once again highlighted the role of cooperation in resolving the economic and trade differences and frictions, and urged negotiators of the two sides to "make persistent efforts" to reach a mutually beneficial deal.

"Cooperation is the best choice for both sides," Xi said, adding that "of course, there are principles in cooperation."