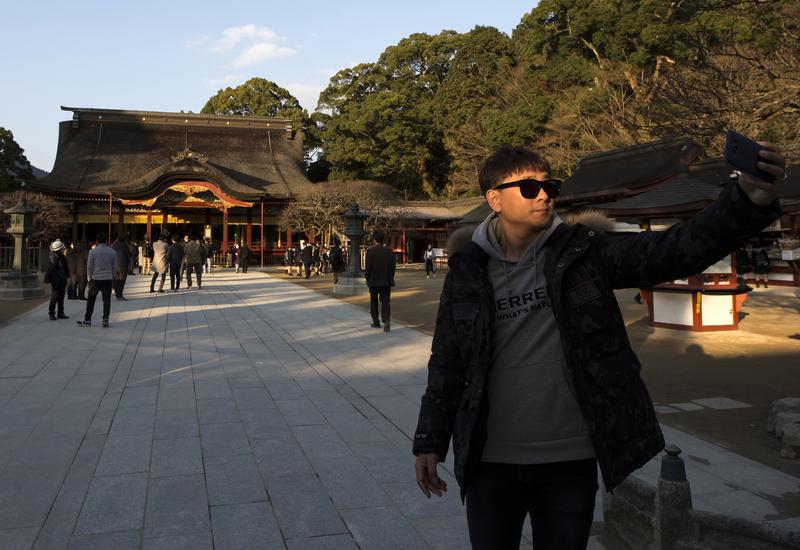 A tourist from South Korea poses for a selfie at the Dazaifu Tenmangu shrine in Fukuoka. (TOMOHIRO OHSUMI / BLOOMBERG)

South Koreans are inflicting pain on Japan’s tourist industry, staying away amid a long-running feud between the two countries that’s spread from historical grievances to trade, investment and even military ties.

The number of South Koreans visiting Japan dropped by about 58% in September from a year ago, data released Wednesday by the Japan National Tourism Organization showed, while visitors overall increased by about 5%. The September blow was cushioned by Japan hosting the Rugby World Cup, one of the globe’s biggest sporting events, which kicked off during the month.

The previous month’s data showed a bleaker picture as the overseas visitor numbers fell for only the second time in six years, dragged down by a 48% plunge in visits from South Korea in August

The previous month’s data showed a bleaker picture as the overseas visitor numbers fell for only the second time in six years, dragged down by a 48% plunge in visits from South Korea in August. Tourists from the country typically account for about a quarter of visitors to neighbor Japan, and the percentage is even higher in western regions closer to South Korea.

Tourist numbers began to slide in July after Japan slapped stricter export checks on specialty materials essential to South Korea’s tech industry. The feud has grown out of a disagreement over whether Japan has shown sufficient contrition for its 1910-1945 colonization of the Korean Peninsula.

In a positive development, Seoul announced that Prime Minister Lee Nak-yon will travel to Japan next week for the Emperor’s enthronement ceremony. But without a clearer sign of a thaw, the clash is casting a shadow over another major event for Japan: Tokyo’s hosting of the 2020 Olympics. Visitor numbers may fall short of the 40 million Prime Minister Shinzo Abe had hoped to attract.

Among the worst hit by the dispute are businesses in Japan’s main southwest island of Kyushu that have become popular weekend destinations for South Koreans, thanks to easy access by ferries or low-cost airlines. The total number of foreign visitors flying or sailing directly to Kyushu fell by 8% in July, and initial estimates indicate a much bigger fall for August.

“It’s tough,” said Daisuke Hegi, who runs a Korean-language website offering tourist information and bookings at traditional inns, or ryokans. Business is down 80% compared with last year, he said.

“It’s a kind of invisible atmosphere, an emotion in South Korea that’s making it difficult to travel to Japan. We can’t see the way out,” Hegi added.

While Kyushu is trying to attract more visitors from China and Southeast Asia, it isn’t as easy a sell to those markets compared with other destinations in Japan, according to Hegi. By contrast, South Korean tourists from Busan can reach Fukuoka, Kyushu’s biggest city, in about an hour.

South Koreans are going against the global trend in their reluctance to visit Japan. Visitor numbers from all other major markets grew, with Chinese tourists up by a quarter, while the number traveling from the UK grew by more than 80% to a record of nearly 50,000 visitors, according to JNTO data.

“I wonder who is benefiting from this situation,” said Hegi. “Kyushu tourism businesses are hurting, but so are South Korean travel companies and airlines.”