Amid rising affluence, China and Southeast Asia are strengthening bilateral ties in agriculture via M&As, land concessions and food security 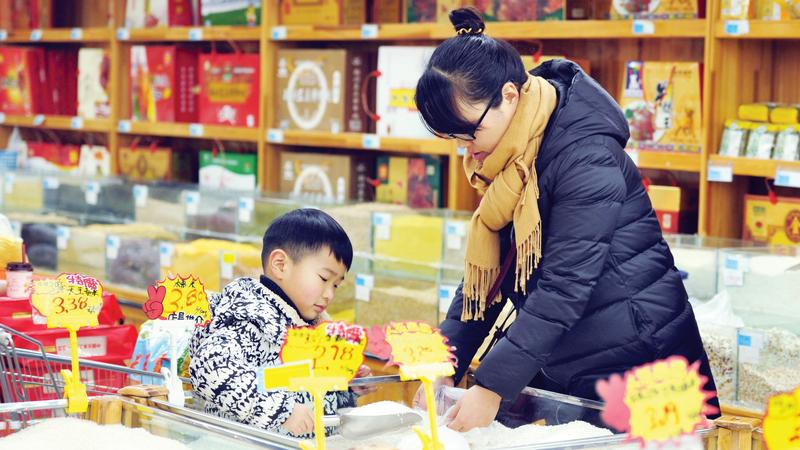 A woman shops for rice at a supermarket in Fuyang, East China’s Anhui province. Increasingly affluent Chinese consumers are prepared to pay for imported premium-grade products and services. (PHOTO / IMAGINECHINA)

Henry Lim Bon Liong, SLAC’s chairman and CEO, said his company was built from the knowledge that he gained from Yuan Longping, the scientist who pioneered China’s hybrid rice technology.

“Only China has the technology on hybrid rice production. And if you can’t increase your arable land area, the only thing you can do is to increase high yield,” Lim told China Daily Asia Weekly.

Seventeen years after SL-8H was developed, SLAC would not only dominate the Philippine rice seed market but would also produce other hybrid rice seed varieties and export to Indonesia, Myanmar and Papua New Guinea.

China’s rapid economic growth in the last 30 years has created a middle class with an increasing appetite for variety and high-quality food. This is why, despite a surge in local production, China remains a food importer, including quality products from Southeast Asia and elsewhere.

According to an August 2017 report by the Hong Kong Trade Development Council, more than half of the 2,000 middle-class Chinese consumers surveyed that January said they were willing to spend more “in pursuit of a higher quality of life”.

Sixty percent of respondents said they use premium-grade products and services, while 75 percent said they buy imported food and beverages.

According to Bruce Tolentino, deputy director-general of the International Rice Research Institute (IRRI) in Manila, China will continue to import high-quality rice from Thailand and Vietnam “to serve the more sophisticated preferences of the wealthier segments of its population”.

Data from the US Department of Agriculture (USDA) and the Thai Rice Exporters Association showed that China was among the top importers of Thai and Vietnamese rice.

China is also among the world’s biggest meat importers, as affluent consumers eat more beef and lamb. The USDA said China’s beef and veal imports increased by 20 percent year-on-year to 974,000 tons in 2017.

Meat & Livestock Australia said China’s chilled beef imports increased from almost nothing in 2007 to 6,558 metric tons in 2017. The marketing, research and development (R&D) body said Australia’s lamb and mutton exports to China climbed by 40 percent during the same period to 83,000 tons.

The rising demand for food has pushed Chinese companies to venture overseas to buy food manufacturing and trading companies.

Some of these big mergers and acquisitions include COFCO International’s purchase of the agribusiness arm of commodity trader Noble Group in 2016, and Bright Food Group’s acquisition of a 90 percent stake in Italian olive oil producer Salov in 2014.

But China’s overseas ventures are not only limited to corporate acquisition. Companies are also availing of land concessions, most notably in Southeast Asia. This is due to the region’s proximity and the availability of inexpensive, irrigated and fertile farmlands.

“Geographical proximity is a plus, just as it was when Japan was looking for a place to invest with the outflow of FDI (foreign direct investment) following the appreciation of the yen. Parts of Southeast Asia are also land rich,” Jonathan Rigg, director of the Asia Research Institute at the National University of Singapore, told China Daily Asia Weekly.

According to data compiled by Land Matrix, a global database on land deals, Chinese companies accounted for the majority of foreign-owned land concessions in Cambodia, Laos, Myanmar, Thailand, the Philippines, Timor-Leste and Indonesia. Most of these land concessions were planted with rubber, oil palm and sugarcane.

A majority of these land deals, which were contracted from 2000 to 2017, were in the Mekong subregion. China accounted for 26 out of 108 land deals in Cambodia during this time. Chinese companies were also involved in more than half of the 25 land deals in Myanmar and 56 land deals in Laos.

“In aggregate terms it will mean more investment, more exports and more aggregate economic growth. One might say, then, that it will bring more wealth and less poverty,” Rigg said.

Rolando Dy, executive director of the Center for Food and Agribusiness at the Manila-based University of Asia and the Pacific, said China sets an example when it comes to diversified agriculture and aquaculture sectors, strong institutions in agriculture-focused R&D, and extension services.

In the past few years, China has sent several agricultural experts to Timor-Leste to develop hybrid rice technology and boost local rice production.

This type of agricultural cooperation was replicated in Brunei following the signing in November of a memorandum of understanding between Brunei’s Department of Agriculture and Agrifood, Ministry of Primary Resources and Tourism and China’s Yuan Longping High-Tech Agriculture.

But perhaps, one of the most significant agriculture partnerships between China and the Association of Southeast Asian Nations (ASEAN) in recent years is the Sino-Singapore Jilin Food Zone.

The food zone was established in 2013 by the Singapore-based urban and real estate developer Ascendas-Singbridge Group and China’s Jilin City government. Touted as a foot-and-mouth-disease free zone, it has already attracted several key investments.

One of these investments is the integrated pig farm being developed by Singapore’s airport services and catering firm SATS, Thai agribusiness giant Charoen Pokphand and Ascendas-Singbridge.

The trade bloc has been shipping rice, palm oil, fruits and vegetables to China for years and trade volume is expected to rise as the Chinese economy continues to grow.

“China is a huge market, one that is growing quite rapidly in both size as well as income,” said Tolentino at the IRRI.

“Moreover, China is adjusting its policies to enable easier access to its internal market. The individual ASEAN member states, as well as ASEAN as a whole, are well-placed to access and serve the China market.”

Dy of the University of Asia and the Pacific said China imported about US$135 billion worth of agri-food in 2017, about 20 percent of which came from ASEAN countries.

However, Dy does not see ASEAN outranking other top food exporters.

“ASEAN is a tropical region. It can’t (competitively) produce soybeans, meat and wheat (that China imports from the United States, Australia and South America),” Dy said.