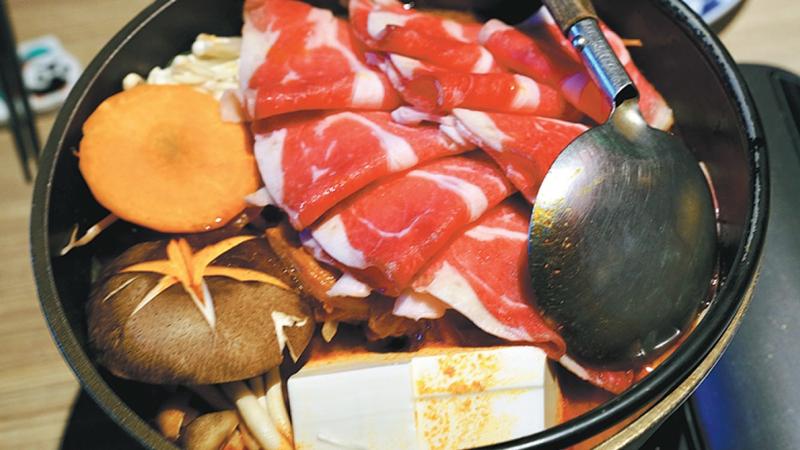 The arrival of autumn also marks the start of the saury-fishing season in Japan, which brings with it the saury-dining season - the mackerel pike is especially delicious at this time of year.

And luckily for local foodies, they won't have to miss the boat since this delicacy can also be enjoyed in Beijing. Fresh saury are shipped into the capital from Hokkaido, where chefs at Koyama simply cure the fish with salt before grilling it, to let its pure flavor shine through.

The restaurant is serving several dishes to counter the autumn chill with a distinctly Japanese touch, from grilled saury to warming sukiyaki. "From beef and mushroom to cabbage, tofu and onion, all our sukiyaki dishes are cooked using traditional methods that present the authentic flavors of Japan," says Anson Tsui, manager of the Beijing branch of Koyama.

The first branch of Koyama opened in Guangzhou, Guangdong province, in 1999, when Japanese restaurants were not common in China. Koyama has since expanded across China and has eateries in Shanghai, Chengdu in Sichuan province, and Guangdong's Shenzhen.

Koyama's flagship Beijing restaurant opened on the lower ground floor of Taikoo Li Sanlitun North in 2013. It offers guests an authentic experience from the minute they arrive.

According to Tsui, what sets Koyama apart from other Japanese eateries in the city is variety - it serves every kind of Japanese food, from sushi and sashimi to sukiyaki and teppanyaki.

"Our menu is a celebration of regional Japanese cooking styles. It stretches to more than 90 pages filled with 400 dishes from all over the country," he says.

"Rather than bowing to internet-driven culinary trends that steer many popular restaurants these days, we are dedicated to maintaining traditional cooking techniques and flavors, and to honoring recipes that have developed over hundreds of years."

Training has always been a core element to the Koyama approach, and it has developed strict training and ranking systems to encourage each of their chefs to grow. The chefs also make frequent research trips to Japan to identify new ingredients and techniques, so that they can expand their understanding of authentic Japanese cuisine and pass it on to diners in China.

Koyama serves a range of vegetable and seafood tempura, and the shrimp tempura is one of the most popular choices among diners.

"Tempura requires a skilled hand in the kitchen. The oil must be heated to exactly the right temperature so that the natural flavors of the ingredients aren't compromised and the batter stays feather-light," says Tsui.

Hailing from the Kansai and Hiroshima areas of Japan, okonomiyaki is a savory pancake filled with ingredients like egg and cabbage, and topped with okonomiyaki sauce, Japanese mayonnaise and bonito flakes.

The term okonomiyaki roughly translates as "cooked as you like it", and is a reference to the rich variety of ingredients that can go into it. Koyama's version includes salmon for a touch of luxury.

From simple California rolls with ripe avocado to Motorola rolls with tempura shrimp, tuna, avocado and grilled eel, there's a sushi variety for everyone. The rolls are also available in half portions, making it easier to sample more than one variety.

Yakitori is another highlight of Koyama's menu. It features a variety of fresh ingredients and choices, including chicken wings, chicken thigh with scallions, chicken hearts and pork belly. Grilled gingko is perfect paired with a jug of warm sake as the cooler weather sets in.