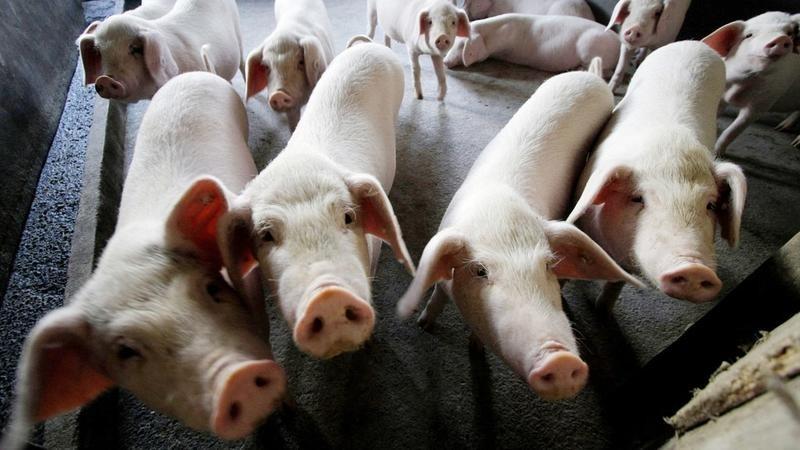 The price of pork in China is likely to continue rising this year due to a significant fall in the supply of pigs caused by African swine fever outbreaks, the Ministry of Agriculture and Rural Affairs said on Wednesday.

The average wholesale price of pork in the country in May was 20.6 yuan (US$3) a kilogram, an increase of 1.6 percent over the previous month, and a year-on-year rise of 29.3 percent, Tang Ke, director for market and information at the ministry, said at a news conference.

Pork is the most common meat in China, the world's largest producer and consumer of pork, accounting for about half of the world's supply

Prices of substitute meats such as beef, mutton and chicken have also kept increasing, but at a slower rate, he said.

It is very likely that pork prices will keep increasing as time is needed for production to increase, Tang said.

Pig stocks in China had been decreasing at an accelerated rate since August, when China reported its first outbreak of African swine fever, with the number of female pigs used for reproduction falling by 21 percent in March year-on-year, the ministry said earlier.

The price of pork in China could rise by more than 70 percent year-on-year in the latter half of this year, it predicted.

China had recorded 137 African swine fever outbreaks by June 16, including 38 this year. However, the frequency of outbreaks has greatly reduced, indicating effective control of the infectious disease, according to the ministry.

Pork is the most common meat in China, the world's largest producer and consumer of pork, accounting for about half of the world's supply.

Zhu Zengyong, a pork industry analyst at the Chinese Academy of Agricultural Sciences, said that despite a general hike in the price of pork in China, some areas such as Sichuan and Yunnan provinces are less impacted by the outbreaks, and prices have not seen big increases in these areas.

"In addition to the impact caused by African swine fever, stricter requirements for environmental protection in the pig industry, including treatment of waste, will also help push up pork prices," he said.

With a decrease in pork production, China will have to import more pork to meet the domestic demand over the next few years, he said.

Imports of pork are expected to keep increasing, and total imports for the year will exceed 1.7 million metric tons, breaking the existing record, he predicted. China became the world's biggest importer of pork in 2016, he said.

"Increasing demand for pork from China will drive up global pork prices, which will stimulate increased production of pork in major sources of imports, such as the European Union, Canada, Brazil and the United States," he said.

China has been diversifying sources of pork import recently, starting to imports from countries including Portugal and Argentina this year.

Guang Defu, spokesman of the Ministry of Agriculture and Rural Affairs, said at Wednesday's news conference that the ministry will try every means to help increase domestic production and the supply of pork, including continued efforts for the prevention and control of African swine fever and guiding the establishment of large-scale pig farms.