Top Iranian commander killed in US airstrike on Trump's order 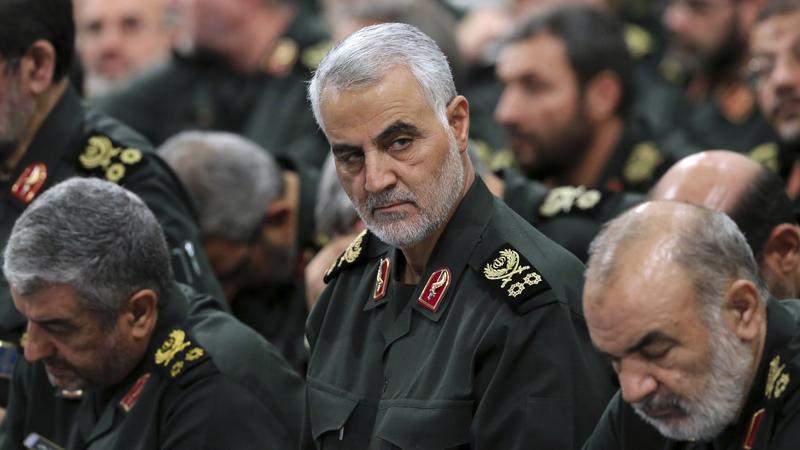 In this Sept 18, 2016, file photo provided by an official website of the office of the Iranian supreme leader, Revolutionary Guard Gen. Qassem Soleimani, center, attends a meeting in Tehran, Iran. Iraqi TV and three Iraqi officials said Friday, Jan 3, 2020, that Soleimani, the head of Iran’s elite Quds Force, has been killed in an airstrike at Baghdad’s international airport. (OFFICE OF THE IRANIAN SUPREME LEADER VIA AP)

A US airstrike in Iraq ordered by President Donald Trump killed one of Iran’s most powerful generals in a provocation that risks escalating a growing conflict with the Islamic Republic.

Qassem Soleimani, who led proxy militias that extended the Islamic Republic’s power across the Middle East, was killed in a strike in Baghdad authorized by Trump, the Defense Department said in a statement late Thursday night.

“At the direction of the president, the US military has taken decisive defensive action to protect US personnel abroad by killing” Soleimani, the department said. “General Soleimani was actively developing plans to attack American diplomats and service members in Iraq and throughout the region.”

The death of Soleimani, who led the Revolutionary Guards’ Quds force, heightened fears that rising tensions between the US and Iran could lead to an armed confrontation that could easily pull in other countries

The death of Soleimani, who led the Revolutionary Guards’ Quds force, heightened fears that rising tensions between the US and Iran could lead to an armed confrontation that could easily pull in other countries. The pressures, which have been building for months, have been complicated by widespread protests in Iraq and Iran.

Iraq's prime minister condemned the killings and said it would "light the fuse" of war.

"The assassination of an Iraqi military commander who holds an official position is considered aggression on Iraq ... and the liquidation of leading Iraqi figures or those from a brotherly country on Iraqi soil is a massive breach of sovereignty," Iraqi Prime Minister Adel Abdul Mahdi said.

He called on parliament to convene an extraordinary session to "take legislative steps and necessary provisions to safeguard Iraq's dignity, security and sovereignty."

Iran’s supreme leader, Ayatollah Ali Khamenei vowed that “severe retaliation” awaits Soleimani’s killers, according to a statement. The state-run Tasnim news agency said three days of mourning had been declared by the government.

Iranian Foreign Minister Mohammad Javad Zarif said on Friday the assassination of Soleimani was, "an extremely dangerous and foolish escalation."

"The US bears responsibility for all consequences of its rogue adventurism," he said in a post on Twitter.

Iran's top security body will meet on Friday to discuss the "criminal" attack that killed Soleimani, its spokesman was quoted as saying by the semi-official Fars news agency.

Iraq's civil aviation authority said on Friday there would be no delays to any flights from Baghdad international airport, state TV reported.

Trump had no immediate comment but tweeted the image of an American flag.

US equity futures fell and Asian stocks reversed earlier gains as the news broke, and oil soared. Treasury futures climbed with the yen as investors sought safer haven assets. Futures on the S&P 500 dropped 0.7% as of 10:46 am in Hong Kong on Friday. Brent crude surged 3.3%.

The Iranian regime will be under “strong pressure” to strike back, said Paul Pillar, a former US Central Intelligence Agency officer and a non-resident senior fellow at Georgetown University in Washington. “Many Iranians will regard this event the same way Americans would regard, say, the assassination of one of the best known and most admired US military leaders. The potential for escalation has suddenly gone up.”

Soleimani, a veteran of the Iran-Iraq war, was a household name in Iran where he’s celebrated for helping to defeat Islamic State in Iraq and Syria and countering US influence.

He had been sanctioned by the US since 2007 and last May Washington designated the Revolutionary Guards Corp in its entirety a foreign terrorist organization, the first time the label has been applied to an official state institution or a country’s security forces.

Earlier in the evening, Iraqi security forces said in a statement that the airport had been struck by rockets. 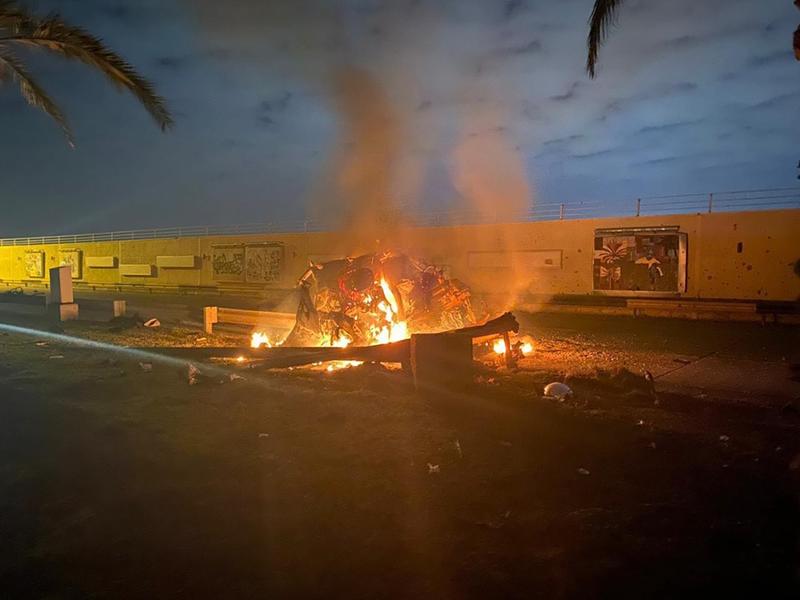 This photo released by the Iraqi Prime Minister Press Office shows a burning vehicle at the Baghdad International Airport following an airstrike in Baghdad, Iraq, early Jan 3, 2020. The Pentagon said Thursday that the US military has killed Gen. Qassem Soleimani, the head of Iran's elite Quds Force, at the direction of President Donald Trump. (IRAQI PRIME MINISTER PRESS OFFICE VIA AP)

The assault in Baghdad marked the latest in a series of violent episodes that have strained already hostile relations between Iran and the US that began last week when an American contractor was killed in a rocket attack on an Iraqi military base in Kirkuk. The death of the contractor led to a rare, direct American assault on an Iran-backed militia in Iraq. That, in turn, prompted an attack on the US embassy in Baghdad.

Soleimani was hit in a US drone strike after planning that began following the rocket attack, according to a US official.

Trump had tweeted a warning of dire consequences for Iranian aggression, with a jaunty twist at the end: “They will pay a very BIG PRICE! This is not a Warning, it is a Threat. Happy New Year!”

The killing of such a prominent member of the Iranian hierarchy was unexpected. The attack was praised by some in Washington on Thursday night, though misgivings were expressed as well.

While Trump had showed restraint in the face of Iranian provocations, “#Iran’s Quds Force chose the path of escalation,” Republican Senator Marco Rubio of Florida said in a tweet. “They are entirely to blame for bringing about the dangerous moment now before us.”

But Senator Chris Murphy, a Connecticut Democrat, said on Twitter that the administration had acted without congressional approval, and asked whether the killing risked “setting off a potential massive regional war.”

A congressional Republican said Soleimani had been responsible for hundreds of American deaths in Iraq and elsewhere. Another said that Iran should be worried about American retaliation rather than the other way around.

Former Vice President Joe Biden, a Democratic presidential candidate, said in a statement that while “no American will mourn” Soleimani’s passing, “President Trump just tossed a stick of dynamite into a tinderbox, and he owes the American people an explanation.”

Outside the US government and political arenas, the reaction also wavered between a sense of justification and apprehension over Soleimani’s killing.

“If it is true that he has been killed, any effort at negotiations between the US and Iran would be off the table,” said Kamran Bokhari,founding director of the Center for Global Policy in Washington. “This could get ugly.”

Mark Dubowitz, the chief executive of the Washington-based Foundation for Defense of Democracies, said “the regime in Iran is now facing their worst nightmare: a US president willing to escalate using all instruments of national power.”

Earlier Thursday, US Defense Secretary Mark Esper told reporters at the Pentagon that the American military was moving from responding to Iranian-backed attacks to anticipating them.

“There are some indications out there that they may be planning additional attacks. That’s nothing new,” Esper said. “If that happens, then we will act and, by the way, if we get word of an attack of some kind of indication, we would take pre-emptive action as well to protect American forces, American lives. The game has changed.”

The latest violence in Iraq occurred in the wake of the anti-government protests that led to the resignation of Prime Minister Adel Abdul-Mahdi.

READ MORE: Iraq to summon US diplomat over attack on Hashd Shaabi bases

Some 500 people have died in clashes between security forces and protesters since Oct 1, according to Iraq’s independent High Commission for Human Rights. Iraqis, mostly from the Shiite majority population, are protesting against corruption, poor services, and Iran’s sweeping influence in the country.