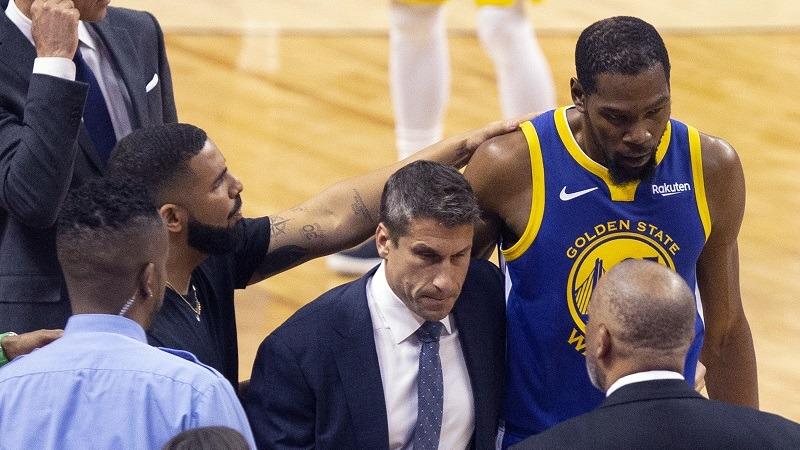 Golden State Warriors forward Kevin Durant, right, is consoled by Drake as he walks off the court after sustaining an injury during first half basketball action in Game 5 of the NBA Finals against Toronto Raptors in Toronto, June 10, 2019. (CHRIS YOUNG / THE CANADIAN PRESS VIA AP)

The reality was both teams lost.

It's almost unimaginable: An NBA Finals game where neither team felt like celebrating afterward. That was the bizarre reality on Monday night, after the Warriors staved off elimination by rallying in the final moments to beat the Raptors and send this series back to Oracle Arena for Game 6 - on a night where Kevin Durant's season came to an end.

I love KD, I love watching him play. When anybody goes down you're saddened by it, but when one of the great players like that goes down, it's almost shocking

ALSO READ: VanVleet, Raptors aren't smiling now, but they might be soon

Durant has an Achilles injury. The Warriors know it's bad. They'll find out how bad on Tuesday.

He wasn't talking about losing the game.

He was talking about seeing Durant get hurt.

Leonard knows what it's like to have the game taken away by injury. He missed most of last season with a leg injury, one that limited him to nine games. He had his commitment to the game questioned - the same way Durant had by some in recent days - and came out the other side an even better player.

That was the hope after Game 5 of the NBA Finals. The series truly seemed insignificant, with both sides aching over Durant's situation.

"I love KD," Raptors coach Nick Nurse said. "I love watching him play. When anybody goes down you're saddened by it, but when one of the great players like that goes down, it's almost shocking."

Durant had missed the previous nine games with what the Warriors insist was a strained calf muscle. This is not a calf injury anymore. Warriors general manager Bob Myers gave a postgame news conference where he delivered the emotional news that Durant hurt his Achilles.

Golden State Warriors forward Kevin Durant (35) goes down with a leg injury against the Toronto Raptors during first half action in Game 5 of the NBA Finals in Toronto on June 10, 2019. (FRANK GUNN / THE CANADIAN PRESS VIA AP)

This should have gone so differently for the Warriors, the team that might be going for a fifth consecutive championship had they not wasted a 3-1 lead in the 2016 finals against LeBron James and the Cleveland Cavaliers.

They're the ones who were down 3-1 in this title series. All they did on Monday night was rally from six points down in the final 3 minutes, get a fantastic defensive stand on the last play of the game to deny Toronto a win and a championship, send the series back to their home for one final game at Oracle before moving to San Francisco next season.

They have a chance at the ultimate comeuppance, a 3-1 finals rally of their own.

Maybe when practice resumes Wednesday, that will bring some joy.

There was no joy on Monday night. The Raptors weren't celebrating. Neither were the winners, who lost much more than Toronto did.

"Those talking heads who say we're better without him, that's just ludicrous," Warriors guard Klay Thompson said. "Like, that's crazy. This is the best player in the world. You could put him on the 30th best team in the league, and that team will make the playoffs. That's how talented he is." 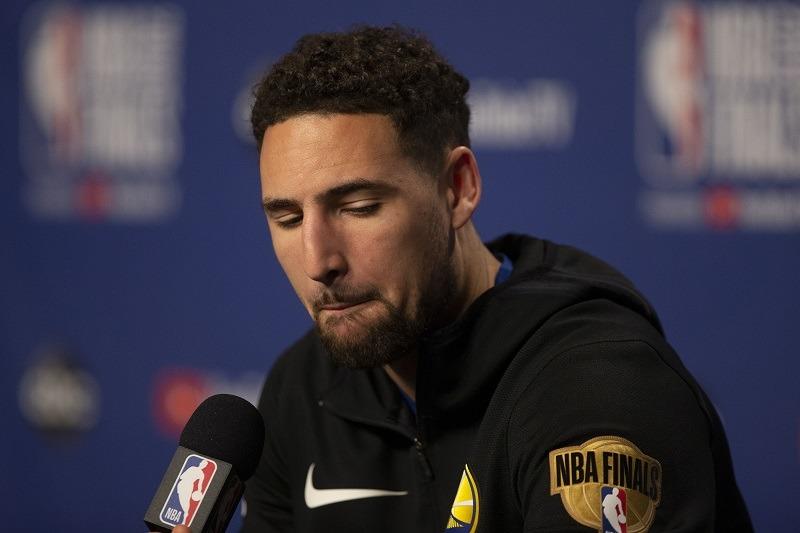 Golden State Warriors' Klay Thompson speaks to reporters during an NBA basketball news conference prior to practice in Toronto, June 9, 2019, ahead of Game 5 of the NBA Finals against the Toronto Raptors. (CHRIS YOUNG / THE CANADIAN PRESS VIA AP)

The Warriors won the last two NBA championships largely because of Durant.

If they win the next two games for another championship, it'll be for Durant.

"It's a team full of heart," said Warriors center DeMarcus Cousins, who spent a year recovering from an Achilles injury that denied him a monster contract last summer and saw him sign with Golden State on a mid-level deal. "It's as simple as that. We're fighters. it's in our DNA. We're going to go down fighting. Period."

Durant would want it no other way.

"I'm just going to pray for the guy," Thompson said.

Leonard said he will be praying for Durant also.

The atmosphere will be raucous on Thursday night. The Raptors, with a second swing at winning a title. The Warriors, looking to make sure they end their Oracle era with a victory.

The joy that should have come out from one locker room on Monday night will, for certain, be exhibited by someone on Thursday night.