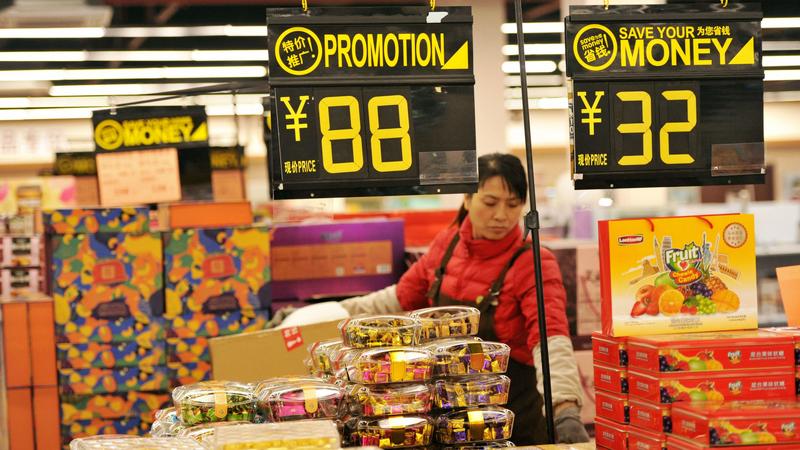 Nianhuo refers to special products often bought around Spring Festival, including not only gifts but also essentials needed for the holidays such as fresh produce, local delicacies, spirits, clothing and other wares.

Though tastes of nianhuo have changed over the years with the rapid development of the retail sector, it is the advent of mobile internet technologies that has triggered demand for imported food products. Alaskan crab, French lobster, Argentine beef, Chilean cherries, fresh milk from Australia .. these are just some of the items that are now popular choices for special family dinners during the festival season.

To cash in on growing demand for such products, an array of retailers and firms are offering special incentives and discounts to lure customers.

Hou Enlong, president of online-to-offline retailer Suning Co that is based in Nanjing, Jiangsu province, believes rising demand for imported fresh produce will be one of the bright spots for retailers during this year's Spring Festival.

"Suning is adopting a direct purchase system globally to cater to the growing demand and has already teamed up with large farms and suppliers of agricultural products from abroad," Hou said.

The retailer has also strengthened its supply chain efforts to ensure adequate supplies of products, he said. Suning has formed alliances with more than 100 overseas production bases and has buyer teams in over 100 countries and regions to source and supply a wide range of imported fresh food products, including fruits, vegetables and seafood.

It also has 45 cold-chain warehouses to serve 179 cities across the nation. The company said it will offer one-day delivery service in more than 300 cities in China in the future.

In addition, Suning's nianhuo shopping festival will last longer than previous years, from Jan 18 to Feb 12, and will feature deep discounts and promotions to attract more shoppers.

Cross-border sales have been brisk on other retail platforms too. Sam's Club, Walmart's high-end membership store, has witnessed a shopping spree since early January.

Andrew Miles, president of Sam's Club China, said imported fresh food products are the top choice for many consumers who buy high-quality products during the celebrations.

A customer walks past an array of imported alcoholic products at a supermarket in Hangzhou, capital of Zhejiang province. (WANG GANG / CHINA NEWS SERVICE)

For instance, cherries from Chile are one of the best-selling imported goods in its offline stores. During a recent one-day offline promotion event, the sales volume of Member's Mark Chilean cherries amounted to nearly 150 tons, up by over 500 percent year-on-year.

Charif Christian Carvajal, marketing director for Europe and Asia at the Chilean Fruit Exporters Association, said while Chinese are bundled up for winter weather, it's actually warm in Chile. "Cherries from Chile not only have counter-seasonal advantages, but also suit Chinese new year culture for its red color - which denotes luck and happiness. We hope the Chilean cherries will imbibe happiness and add color to the Chinese New Year market," Carvajal said.

Cherries are one of Chile's main exports, and the crop is usually harvested from November to February, making it one of the popular selections for Spring Festival shopping.

According to a recent survey conducted by Amazon China and market consultancy Data 100, most of the respondents preferred to buy cross-border goods from online platforms at least twice a month in 2018. More than half of those surveyed said their average monthly spend hit over 2,000 yuan (US$294).

Considering the geographical distribution of cross-border online shopping, Beijing, Shanghai, and Guangzhou and Shenzhen in Guangdong province topped in terms of citizens' purchasing power, followed by new first-tier cities such as Tianjin, Hangzhou in Zhejiang province, Chengdu in Sichuan province, Wuhan in Hubei province, and Nanjing and Suzhou in Jiangsu province.

While top-tier cities still lead the cross-border online consumption, many other cities are showing great potential. 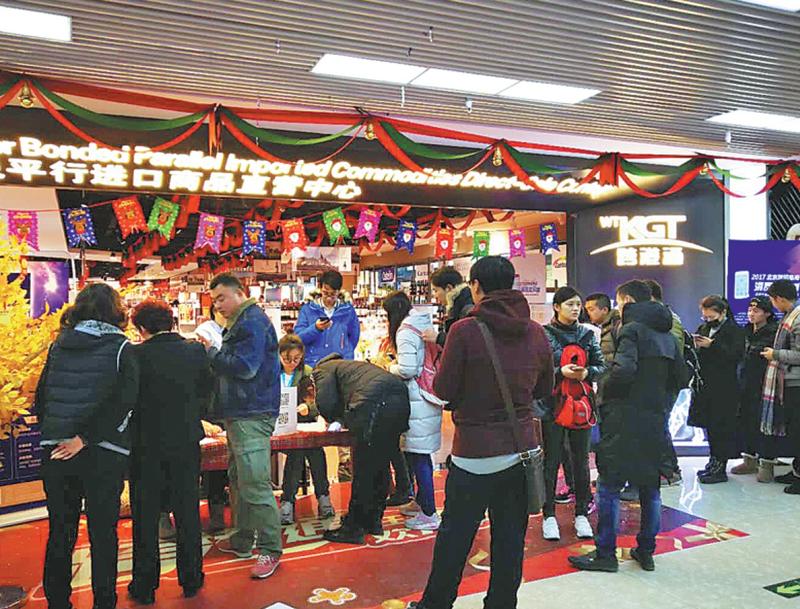 Consumers queue up for payments at a duty-free store in Beijing. (PHOTO PROVIDED TO CHINA DAILY)

More than 30 percent of the respondents in Chongqing, Wuhan, Xi'an in Shaanxi province and Nanjing said over half of their online orders are cross-border online shopping. With a monthly expenditure of more than 10,000 yuan, Nanjing consumers purchase online imported products over four times a month, taking the top spot on the cross-border online shopping consumption.

Jiuquan in Gansu province, Xiantao in Hubei province, Zhumadian in Henan province and Guang'an in Sichuan province are among the fastest-growing cities list in terms of imported goods sales volumes on Amazon platform. Among them, Jiuquan witnessed a 120 percent year-on-year growth in 2018.

In 2018, the total volume of retail import and export commodities through the customs cross-border e-commerce management platform surged by 50 percent to 134.7 billion yuan, with imports up 39.8 percent to 78.58 billion yuan, according to the General Administration of Customs.

A report by market research company iiMedia Research shows the number of Chinese consumers who purchase imported goods once a week surged by 8.5 percent year-on-year in the first six months of 2018.

More than 40 percent of those surveyed said their cross-border purchases are mainly driven by the desire to try popular overseas products. Another 41.9 percent said their chief consideration is to find cost-effective goods.

"Compared with their parent generation, the post-1990s and post-1995s generations love chasing the trend. Usually, they love to shop small-group commodities and high-quality goods, asking for more diversified and international selections," said Liu Peng, general manager at the import and export division of Tmall.

The tech-savvy younger generation, especially those born in the 1990s and 1995s, has shown great enthusiasm for the convenient e-commerce and asks for diversified and international nianhuo selections.

Specifically, the New Retail boom brought by the cross-border e-commerce has also paved the way for the consumption of overseas produce during Spring Festival. With the booming internet technologies, both urban and rural consumers will enjoy the convenience of purchasing imported goods from online channels.

"Currently, mature families are still the core of cross-border consumption," the report said. "With their growing purchasing power, younger consumers are adding new impetus and vitality for imports, presenting a new trend of diversified consumption."