While meeting with the DPRK foreign minister, Ri Yong-ho, Wang Yi said China fully appreciates the measures taken by the DPRK for denuclearization of the Korean Peninsula.

China speaks highly of the Pyongyang summit held on Sept 18-20 between the DPRK and ROK leaders and the joint declaration signed at the summit, and expressed clear support in a timely manner, he said.

China supports the joint efforts to improve DPRK-US and DPRK-ROK relations and to push forward the process of denuclearization of the Korean Peninsula, he said.

On bilateral ties, Wang said that to constantly strengthen and develop the traditional friendship between China and the DPRK in the new era is a significant consensus reached by Xi Jinping, general secretary of the Central Committee of the Communist Party of China, and Kim Jong-un, chairman of the Workers' Party of Korea.

China is willing to work together with the DPRK to implement the consensus reached by the two top leaders and steadily push forward exchanges in various fields, so as to maintain a good momentum in the development of bilateral relations, said the Chinese state councilor.

For his part, Ri said that the DPRK attaches great importance to DPRK-China relations, adding based on the important consensus reached by the two top leaders, the DPRK is willing to promote high-level exchanges and strategic communications with China.

ALSO READ: China calls for further dialogue between DPRK, US

The DPRK hopes to continue working with China to make efforts for the denuclearization of the Korean Peninsula and for the peace and security in Northeast Asia.

When he met with the ROK foreign minister, Wang said China has always supported the improvement of ties between ROK and the DMRK as well as the DPRK-US dialogue. 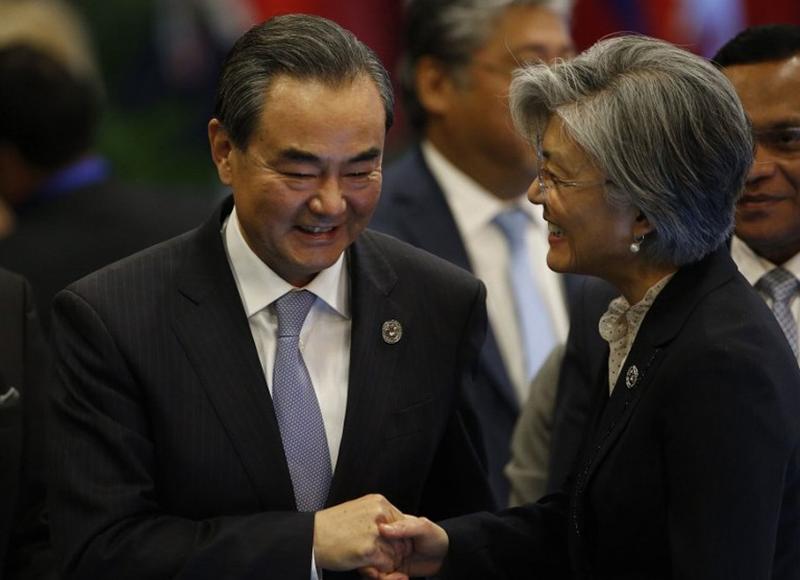 The international community welcomes and appreciates the Pyongyang Declaration and the sincerity the DPRK shows has gained global recognition, Wang said, expressing his hope that the ROK and the DPRK will continue to try to implement the consensus reached between the two sides and accelerate the improvement of bilateral relations.

All parties concerned should learn historical lessons and meet each other halfway, said Wang, adding that China is willing to maintain close coordination with the ROK.

For her part, Kang said the Pyongyang Inter-Korean summit has injected momentum into the settlement of the peninsula issue and the safeguarding of peace on the peninsula.

The ROK supports direct communication between the United States and the DPRK, and hopes all related parties will make further efforts to speed up the denuclearization process on the peninsula, she said.

Seoul highly values the important role Beijing has played in addressing the peninsula issue and hopes to enhance communication and coordination with China in this regard, said Kang.