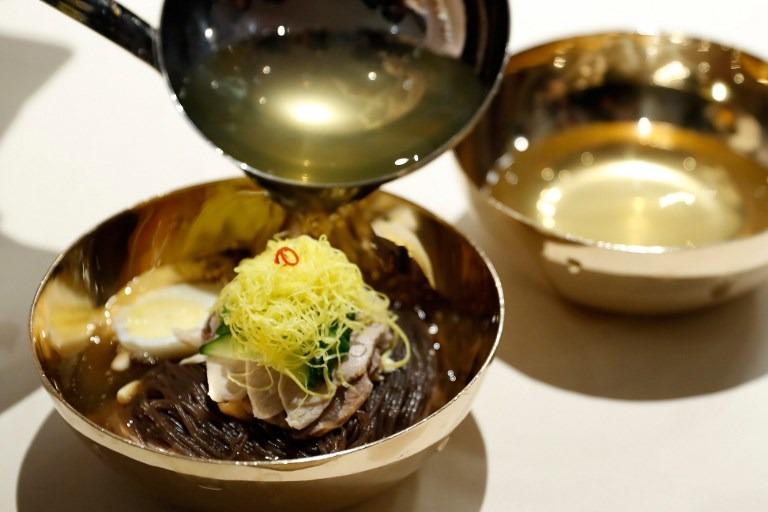 This picture taken on April 27, 2018 shows the DPRK's signature dish of cold noodles served by Okryu Gwan, a famed restaurant in Pyongyang, during the official dinner of the inter-Korean summit in the truce village of Panmunjom. (KOREA SUMMIT PRESS POOL VIA AP)

SEOUL - Long lines formed on Friday outside restaurants in the Republic of Korea’s capital serving Pyongyang-style cold noodles after the dish took on a starring role at a historic summit between leaders of the ROK and the Democratic People's Republic of Korea.

DPRK leader Kim Jong-un brought a batch of the noodles for a dinner banquet on Friday, at the request of ROK President Moon Jae-in.

“We’ve made efforts to bring Pyongyang naengmyeon all the way from Pyongyang,” Kim said in opening remarks at the summit, referring to the DPRK capital.

Moon had requested that the dish be on the menu at the banquet, and asked Kim if he could bring a takeaway batch from a famous Pyongyang restaurant, Okryu Gwan

“So, hopefully, Mr President can enjoy Pyongyang naengmyeon from afar, though I suppose I mustn’t say ‘afar’ now,” Kim said with a chuckle.

Naengmyeon is noodles in a chilled meat broth, topped with beef brisket, pickled radish, sliced cucumbers and half a boiled egg.

Moon had requested that the dish be on the menu at the banquet, and asked Kim if he could bring a takeaway batch from a famous Pyongyang restaurant, Okryu Gwan.

DPRK officials were happy to oblige, the South’s presidential office said, adding that the DPRK had even sent a chef from the restaurant to prepare the dish.

Hungry people in the ROK were clearly impressed and by midday #Pyongyang Naengmyeon was one of the top trending topics on Korean-language Twitter while the lines at restaurants specializing in the dish, like the Eulmildae in a run-down part of Seoul, grew.

“This is the longest queue I’ve ever seen,” Kim Won-seok, a regular customer at the restaurant, said of the customers lined up 40 meters (130 feet) just before noon.

The noodles were an unusually hit at a summit that many people in the ROK are viewing with wary optimism.

Many ROK people hoped the first visit to the South by a leader from the North, would be a turning point for peace on the war-divided peninsula.

Some people watching a large television screen beaming images of the leaders to a crowd in front of Seoul’s city hall cheered and jumped with joy when Kim - whose nuclear and missile tests last year stoked fear of war - crossed the border to shake hands with Moon.

“I’m filled with emotion,” said Park Ha-seok, 60, as he watched the pictures being broadcast from the border village of Panmunjom. “I don’t expect a big change but this is a start.”

The two sides are technically still at war because the 1950-53 Korean war ended in a truce, not a full peace treaty.

Lee Ji-eun, a 32-year-old doctor and mother of a baby girl, said the pictures had made her unpack an emergency bag she had placed by her front door about six months ago in case of war.

“The bag has my daughter’s diapers, a portable radio and a gas burner,” Lee said. “Now I find it funny that I told my babysitter to take this bag and my daughter to flee to the basement if there’s war.”

Fisherman Park Tae-won, who lives on a ROK island just 1.5 km from the maritime boundary with the North, said he hoped the summit would lead to a relaxation of restrictions on going out to sea.

“Please, we want to go fishing out there as much as we want, without the curfew on fishing only once a day,” he said.

Choi Gwang-chun, who runs a restaurant in the ROK town of Daejeon, is offering a special “unification liquor” cocktail made of Taedong beer, named after a DPRK river, and ROK Halla soju, a distilled rice spirit named after a ROK mountain.

"Those who order ‘unification liquor’ will also get a ‘unification pizza’ topped with nuts in the shape of the Korean Peninsula for free,” said Choi, whose father came from the DPRK.

“I plan to run this offer until the day South (ROK) and North Korea (DPRK) unify,” he said. “I hope I don’t have to run it too long.”