The language we encounter here is like an archaeological find, as fascinating to us as ancient scrolls or coins, because we sense that its time is running out 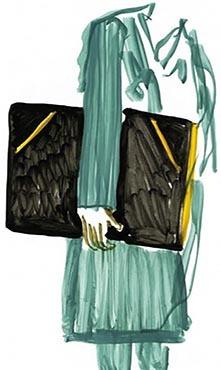 Sketch for the shoulder bag designed by Ronan & Erwan Bouroullec

Italian designer Miuccia Prada has always been at the cutting edge of fashion’s drive. From countercultural fabric choices and subverting definitions of beauty to hiring architects to design her stores, as well as the brand’s foundations in Milan and Venice that show constantly revolving art exhibitions, Prada’s offerings have been ambitious and, in their finest manifestations, avant-garde.

Now, the woman with the “ugly beauty” mantra has surprised the market again by inviting four celebrated creative minds to work on a unique item for her autumn/winter 2018 menswear collection. True to form, on this occasion Mrs Prada (as she’s called in-house) has switched the focus to the industrial side of the multifaceted Prada identity. Globally renowned architects Rem Koolhaas, Ronan & Erwan Bouroullec, Herzog & de Meuron and Konstantin Grcic have been enlisted to work with a simple brief: to create an item using the black nylon fabric, considered a Prada icon.

In 1984, Mrs Prada first introduced black nylon with the brand’s backpack. It served as the perfect representation of the designer’s nomadic, exploratory sensibilities, but also of her understanding of the principle of utilitarianism. Totem of style and travel piece combined, the fashion-meets-function item became the It-bag overnight. It was minimal, too, emblazoned only with Prada’s iconic triangular logo. The black nylon backpack was a high-low stunt of prescient proportions, a game-changer that is still coveted today.

The reinterpreted frontal backpack by Rem Koolhaas for Prada Invites

Prada Invites – as the new initiative is called – brings together the architects to manifest four radically different approaches that investigate the poetic, practical, technical and aesthetic aspects of nylon. The Paris-based Bouroullec brothers have collaborated with a wide range of companies such as Cassina, Alessi, Samsung, Flos and more; their work covers a broad stretch from jewellery to structures, and from drawings to videos and photography. But this is their first time trying their hand at fashion design, so how did they find the project?

“I’ve always liked the profiles of people – architects, painters and students – walking around with their art folders,” says Ronan Bouroullec. “The movement of that rectangle… its clear-cut, fixed geometry contrasting with the moving bodies. This project takes that geometry and instils it in a shoulder bag, with its inside gusset, low-fastening elastic bands and eyelets, and use of a single colour, which produces a subtle graphical playfulness.”

The Munich-based Grcic has won numerous design awards and has curated exhibitions such as Design Real for London’s Serpentine Gallery, as well as building pavilions for the Venice and London Biennales. His style is pared down and minimal – “simplicity”, as he calls it – and for this project, he used maritime inspiration for his contribution. “The key reference for my proposal is the fishing vest, representing the idea of a bag, which is what the nylon material has been primarily used for, as a garment,” he explains. “My first thought was to recreate [German Fluxus artist] Joseph Beuys’ famous fishing vest in Prada black nylon. Later, I worked on two models that interpret the theme in a more abstract way: Apron and Hood.”

Swiss phenoms Jacques Herzog and Pierre de Meuron received the Pritzker Prize for architecture in 2001 and have assembled a veritable greatest-hits of work: Beijing’s National Stadium, aka the Bird’s Nest; the Tate Modern in London; the Pérez Art Museum Miami; and M+ in Hong Kong, due to open next year. Prada is a regular collaborator with Herzog & de Meuron, who build stores for the brand, but this was the inaugural fashion crossover.

For the duo’s entry, Herzog has invoked language and its changing identity. “Language has lost its power – to persuade people with arguments or to enchant them with the poetry of words,” explains Herzog. “It was a weapon of enlightenment.” He argues that language has lost its seduction, becoming an empty vehicle of information. As such, he uses text as a design element, like a pattern or decoration, with entire passages almost like ornamental tattoos. “The language we encounter here is like an archaeological find, as fascinating to us as ancient scrolls or coins, because we sense that its time is running out,” he says.

Last but not least is the towering figure of the Rotterdam-born Koolhaas, who runs Dutch architectural firm OMA. Currently a professor at Harvard, he has built the Fondazione Prada in Milan, the Garage Museum of Contemporary Art in Moscow and the headquarters of China Central Television in Beijing, amongst others.

Koolhaas has taken the same deconstructive approach to the Prada commission as he does on a building. “This project proposes a reinterpretation of the backpack, more suitable for the contemporary urban citizen,” he explains. “It is carried on the front so its contents are at any time accessible to the wearer. It is dimensioned to accommodate the devices that enable modern life to unfold, easily unpacked through convenient openings.” The smart countercultural thinking of back-to-front “gives a more intimate sense of ownership”, he adds. Which sounds a lot like Mrs Prada’s entire blueprint for design, doesn’t it? 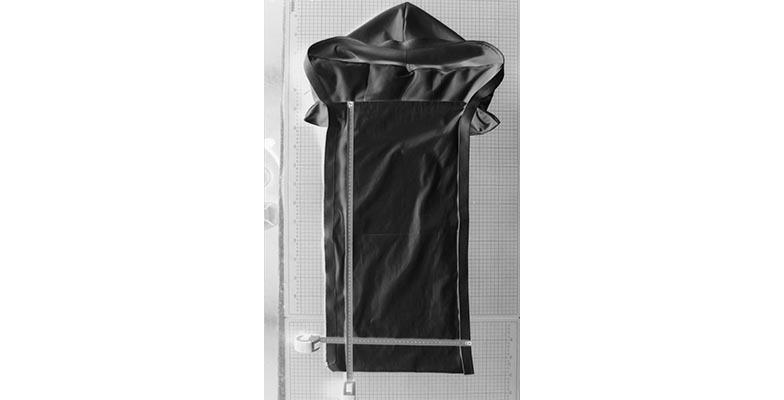