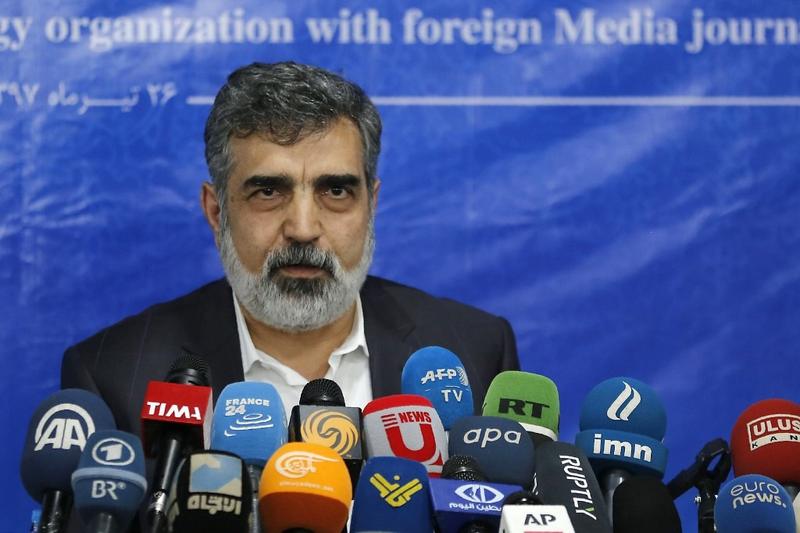 Behrouz Kamalvandi, spokesman of the Atomic Energy Organization of Iran (AEOI), answers the press in the capital Tehran on July 17, 2018. (ATTA KENARE / AFP)

LONDON - Iran said on Wednesday it would not give European powers any more time beyond July 8 to save its nuclear deal by shielding it from U.S. sanctions.

Iran added that it would start enriching uranium at a higher level unless other European signatories to the deal protect edits economy from the U.S. sanctions within 60 days

The spokesman for Iran's Atomic Energy Organization said Tehran was ready to go through with a threat to enrich uranium to a higher level if Europe did not step in, a move that would breach the terms of a nuclear pact with world powers.

Any such breach would raise already heightened tensions between Iran and US President Donald Trump who has said he is ready to take military action to stop Tehran getting a nuclear bomb.

Tehran said in May it would reduce compliance with the nuclear pact it agreed with world powers in 2015, in protest at the United States’ decision to unilaterally pull out of the agreement and reimpose sanctions last year.

Iran added that it would start enriching uranium at a higher level unless other European signatories to the deal protect edits economy from the US sanctions within 60 days.

"Iran's two-month deadline to remaining signatories of the JCPOA (nuclear deal) cannot be extended, and the second phase will be implemented exactly as planned," atomic agency spokesman Behrouz Kamalvandi was quoted as saying by Tasnim news agency.

Iranian Oil Minister Bijan Zanganeh also said on Wednesday that Europe was not helping to counteract US sanctions on its energy sector by buying its oil.

The 2015 nuclear pact seeks to head off any pathway to an Iranian nuclear bomb in return for the removal of most international sanctions.

The accord requires Iran to curb its uranium enrichment capacity, capping Iran’s stock of low-enriched uranium at 300 kg of uranium hexafluoride enriched to 3.67 percent or its equivalent for 15 years.

A series of more intrusive UN inspections under the deal have verified that Iran has been meeting its commitments. Tehran has always said its nuclear program is for only electricity generation and other peaceful purposes.

But Trump said he was pulling out of the deal because it failed to address Iran's missile program or punish it for waging proxy wars in the Middle East. Trump's action has forced countries around the world to boycott Iranian oil or face sanctions of their own.

Britain, France and Germany have been planning a new push to keep Iran in the 2015 deal, but European officials have acknowledged they may be nearing the end of the diplomatic road.

Worries about a confrontation between Iran and the United States have mounted since attacks last week on two oil tankers near the strategic Strait of Hormuz shipping lane at the entrance to the Gulf.

Washington blamed Iran, and the Pentagon announced the deployment of about 1,000 more U.S. troops to the Middle East, citing concerns about a threat from Iran.

Iran has denied any involvement in the tanker attacks.

The secretary of Iran's Supreme National Security Council, Ali Shamkhani, said on Wednesday there would be no military confrontation with the United States - echoing a statement from Iran's president a day earlier.