The reforms juggernaut rolls on 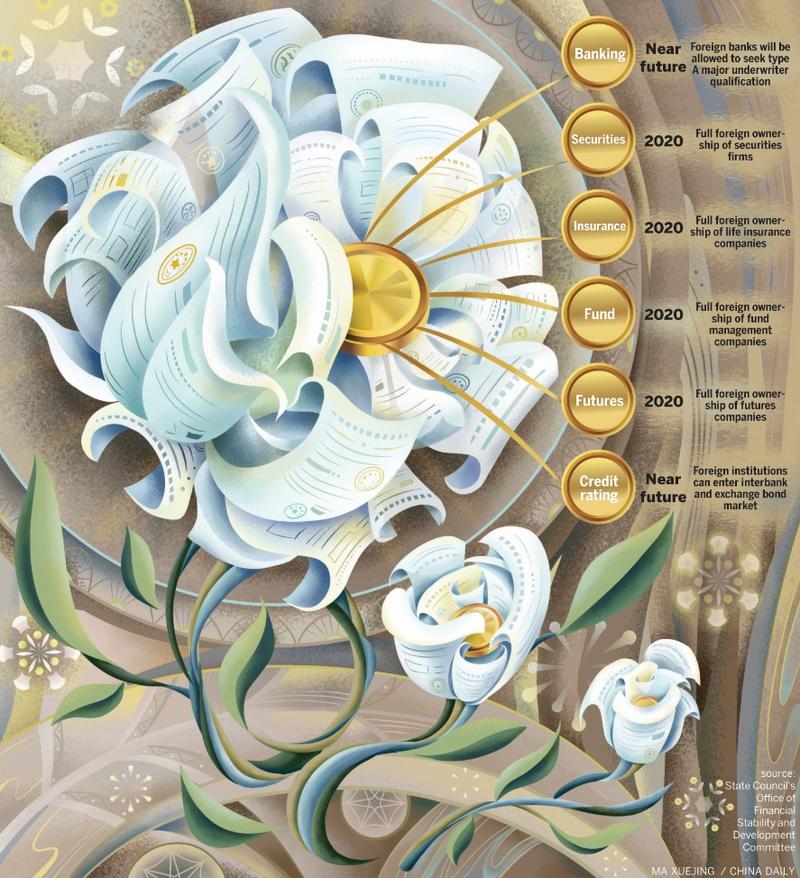 On July 20, as if to silence even the most diehard sceptics, the Office of Financial Stability and Development Committee, which is part of the State Council, China's Cabinet, announced as many as 11 policies at one go to further open up the financial services sector.

He Nanye, a guest researcher with the Suning Institute of Finance, said the central regulator's relaxed grip on foreign ownership in the financial sector demonstrates China's resolve to deepen its opening-up process.

The big-ticket reforms took even sectoral experts somewhat by surprise because in the wake of protracted China-US trade tensions, some critics seemed to begin to nurse doubts about the slowing economy's future prospects.

One such doubt was if the new foreign investment law－it was enacted by the 13th National People's Congress, China's top legislature, during its second annual session in March－would suffice to sustain the global financial community's confidence in the Chinese economy.

But, post-July 20, all such doubts are being laid to rest, and the financial world's sentiment toward China is brightening rapidly, insiders said.

That's because, taken together, the NPC's decision in January to approve in advance local governments' borrowings via bonds, the foreign investment law in March, and the July 20 reforms represent a continuation of sustained efforts to modernize China's financial and investment landscape, observers said.

They also show the domestic financial services sector is well prepared and competitive to face competition from global players and other inevitable challenges.

For example, foreign banks are encouraged to set up wealth management subsidiaries. They can seek to be type-A principal underwriters in China's interbank bond market.

In a note, Citi, one of the world's largest financial players, said it would welcome any move that leads to the further opening-up of the Chinese financial system.

It further said it is assessing opportunities in China that are aligned with its strategic business objectives and strengths.

Not just banks, even foreign insurers will greatly benefit now in China. By 2020, foreign companies can own 100-percent stake in a life insurance company in China.

That represents advancing the new norm by one year, according to the plan announced in June 2018.Foreign insurers are also allowed to hold 25 percent or more in the insurance asset management companies. Besides, the entry restriction of at least 30 years of operating experience for foreign insurance companies has been removed.

As if in anticipation of these reforms, French insurance heavyweight AXA announced late last year that it will buy the remaining 50 percent in its Shanghai-based joint venture AXA Tianping Property& Casualty Insurance Company.

Xavier Veyry, chief executive officer of AXA in China, said the company is aware of the efforts that the Chinese central regulators have made to further open up the financial services market. While China is the world's second-largest insurance market, it is still evolving rapidly, and will soon claim the top position.

Although insurance was the first industry that opened to foreign investment in the early 1980s, foreign insurers have long faced barriers in terms of ownership structure, distribution channels and capital. But the July 20 reforms will help remove all the three obstacles, said Ma Tingting, an analyst with Sinolink Securities.

"More diversified products and advanced management concepts will be introduced in China with the relaxed policy on foreign insurers. Overseas insurance companies are also more experienced in asset management, especially in terms of global asset management. In this sense, competition will be more fierce in the Chinese insurance industry," she said.

Zeng Gang, deputy director of the National Institution for Finance and Development, said that asset management institutions work as long-term stabilizers of the financial services market. The introduction of foreign institutions will enrich the domestic market and facilitate the development of China's direct financing market, he said.

Since April 2018, China's central regulators have been accelerating the financial sector opening-up. Yi Gang, governor of the People's Bank of China, the central bank, announced 11 financial opening-up policies and their timeline during the Boao forum in April 2018.

CBIRC's chairman Guo Shuqing announced in May that the commission will come up with 12 more opening-up policies later this year.

During the 11th Lujiazui Forum held in Shanghai in mid-June, Yi Huiman, chairman of the China Securities Regulatory Commission, said that another nine policies will soon be in place to advance the capital market opening-up.

At the 2019 World Economic Forum's Annual Meeting of the New Champions held in Dalian, Liaoning province, from July 1 to 3, Premier Li Keqiang said that China will allow full foreign ownership of securities firms, futures business and life insurance companies by 2020.

According to the negative list announced by the National Development and Reform Commission and the Ministry of Commerce in June 2018, the limit on foreign ownership was planned to be removed in 2021. But Premier Li's remarks indicate the due date will be advanced by a year, reaffirming the country's strategy of further opening up the financial sector.

In response to Premier Li's announcement in Dalian, Xiao Yuanqi, chief risk officer of the CBIRC, said at a news conference on July 4 that the opening-up of the banking and insurance industries will not be affected by external factors. Foreign institutions with professional know-how or those with special products and management expertise in specific sectors are especially welcome to enter the China market, he said.

The country's solid strides forward have attracted the attention of leading international financial institutions. Major global benchmarks like MSCI, FTSE Russell and S&P Dow Jones have included the A-share market in their key indexes over the past two years.

Data from China Central Depository & Clearing showed that overseas institutions held Chinese bonds worth 1.6 trillion yuan (US$232.7 billion) by the end of May, the highest level for the year so far.

Cheng Shi, chief economist at ICBC International Holdings Ltd, said that the Chinese financial system is now "resonating" with the country's economy, which will attract international capital for at least two decades.

Industry insiders and experts, however, suggested that the shortfalls need to be addressed. Paul Romer, co-recipient of the 2018 Noble Memorial Prize in Economic Sciences, said during the Lujiazui Forum that there is still much work that China needs to explore the social value of equity financing. That will make a big difference to China's financial opening-up.

Based on equity financing, companies can solve a number of problems such as bankruptcy and keep risks at a manageable level.

Zhou Xiaochuan, former governor of China's central bank, said overseas institutions or foreign capital still have a limited presence in the Chinese banking, insurance and capital market. In this sense, there is much room for development.

Zhou said there were limits on the use of renminbi in the past, which may have distorted its value to a certain extent. But the renminbi should head for higher convertibility when the country is opening up its financial sector.

He also said measures are needed to ward off problems like money laundering when advancing the free convertibility of the Chinese currency.