Turkey: 2 million to be resettled in northern Syria's safe zone 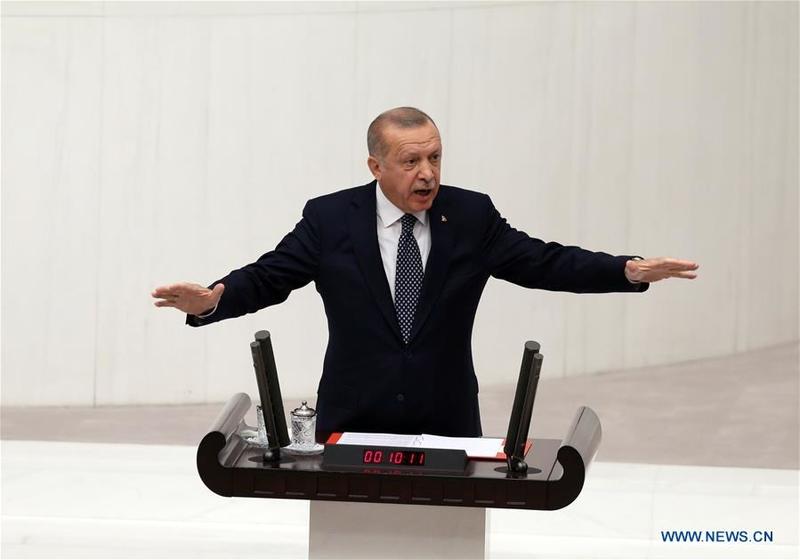 ANKARA — Turkish President Recep Tayyip Erdogan revealed on Tuesday for the first time the plans for resettling 2 million people in the safe zone to be built in northern Syria.

The zone, to be established between the Euphrates River and the Iraqi border, was agreed by Turkey and the US in August.

Speaking at the opening ceremony of the new legislative year of the Turkish parliament, Erdogan vowed to take unilateral military steps to set up the zone, adding that Turkey plans to hold a donor conference for the reconstruction of northern Syria.

We plan to resettle 2 million people along the 30-km deep safe zone which we will create in the area between the Euphrates River and the Iraqi border, including Manbij.

"We plan to resettle 2 million people along the 30-km deep safe zone which we will create in the area between the Euphrates River and the Iraqi border, including Manbij," Erdogan said.

These towns and villages will be built with the support of the international community and Turkey has completed the preliminary work and identified their locations, he said.

Ankara has calculated the costs, and as soon as the safe zone is created, Turkey wants to take a step to ensure that the Syrians hosted in Turkish territory will return to their homes peacefully, Erdogan added.

A total of 200,000 residences will be constructed under the plan, according to a booklet that provides budget and construction details as well as costs of the resettlement areas.

"The only reason behind our presence in Syria is the fact that the terrorist threat against our borders has also become an obstacle preventing the return of Syrians in Turkey to their country," Erdogan added, referring to the People's Protection Units (YPG), a group that Ankara sees as the Syrian branch of the outlawed Kurdistan Workers' Party (PKK).

On Aug 7, Turkish and US military officials agreed to set up a safe zone in northern Syria and develop a peace corridor to facilitate the movement of displaced Syrians who want to return home. The deal also envisages the withdrawal of YPG fighters to the southern part of the region.

Meanwhile, Turkey asked for establishing military bases in the zone for conducting patrols in the east of Euphrates and the negotiations are still ongoing.

However, the retreat of the YPG has not started yet, frustrating Ankara on the safe zone talks with the US which sees the Kurdish fighters as the local partner in fighting the extremist Islamic State (IS) group. The US is still delivering aid to the Kurdish fighters despite the defeat of IS.

Turkey originally planned to launch a military incursion into the Kurdish-controlled eastern Euphrates but put it on hold upon US President Donald Trump's proposal of a safe zone.

Ankara warns that it can take actions for unilateral intervention in the east of the Euphrates if the US fails to meet its demands.