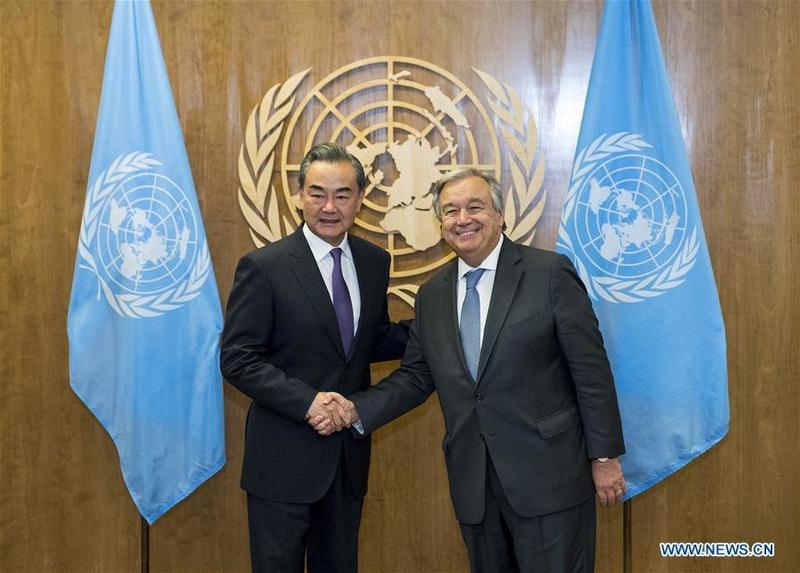 UNITED NATIONS - China is committed to building a community with a shared future for humanity and will continue to work with the UN to make it happen, Chinese State Councilor and Foreign Minister Wang Yi said on Thursday.

During a meeting with UN Secretary-General Antonio Guterres, Wang said China, as an advocate and practitioner of multilateralism, firmly safeguards the international order based on the purposes and principles of the UN Charter.

China has always and will continue to support the UN's work including its efforts to play a more significant role in international affairs, said the state councilor.

China stands ready to work closer with the UN in a variety of areas, thus contributing more to world peace and prosperity and building a community with a shared future for humanity, he said.

The Chinese people, relying on their diligence and wisdom, have ushered their country into the era of modernization, a remarkable feat in human history. It is an inevitable trend for emerging countries such as China to develop, Wang said.

However, many countries have grown concerned over the increasing instability and uncertainties amid intensified unilateralism and protectionism. Wang noted that the world is in dire need of joint efforts to safeguard multilateralism, international rules and laws.

ALSO READ: A shared future for the world benefits all nations

While appreciating China's staunch support for his organization and in safeguarding multilateralism, the UN chief said he expects China to play a greater role in international affairs. The UN supports China's Belt and Road Initiative, he added.