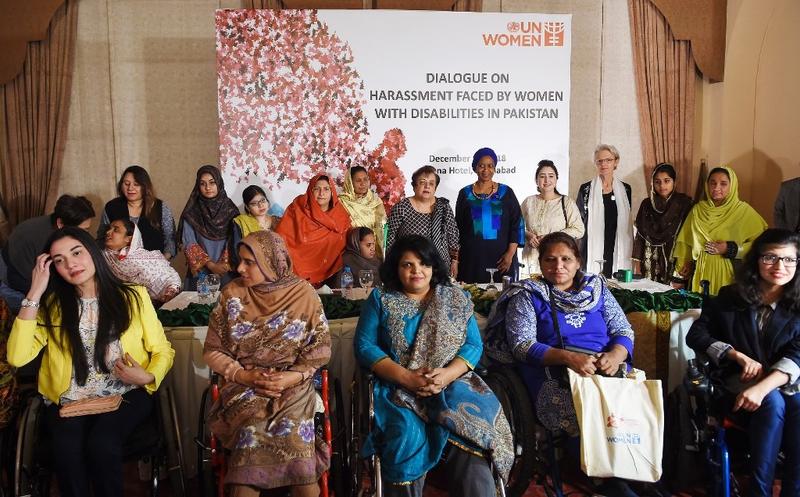 In this Dec 7, 2018 photo, UN Women Executive Director Phumzile Mlambo-Ngcuka (top row, 5th right) and Pakistan Minister for Human Rights Shireen Mazari (top row, 6th left) poses for photographs with guests after a dialogue on the harassment faced by women with disabilities in Pakistan, during her visit to Islamabad. (FAROOQ NAEEM / AFP)

UNITED NATIONS — The UN women's agency launched a campaign Monday to bring a young generation of women and men into the campaign for gender equality ahead of next year's 25th anniversary of the conference that adopted the only international platform to achieve women's rights and empowerment.

UN Women announced its new "Generation Equality: Realizing women's rights for an equal future" at a news conference where it also made public events planned to mark adoption of the 150-page platform for action to achieve gender equality by 189 governments at the 1995 Beijing women's conference.

"Today, nearly 25 years after the historic Beijing conference, the reality is that not a single country can claim to have achieved gender equality," said a statement from UN Women's executive director, Phumzile Mlambo-Ngcuka. "Despite some progress, real change has been too slow for most women and girls in the world, and we see significant pushback in many places."

"Women continue to be discriminated against and their contributions undervalued," she added. "They work more, earn less and have fewer choices about their bodies, livelihoods and futures than men — and they experience multiple forms of violence at home, at work and in public spaces."

Mlambo-Ngcuka said the General Equality campaign is aimed at speeding systematic change "on the laws, policies and outdated mindsets that must no longer curtail women's voice, choice and safety."

UN Women's deputy executive director, Asa Regner, said at the news conference that there have been positive results since Beijing. She pointed to a record number of girls in school, better access to health care, a decrease in maternal mortality, more women in top positions in the business world and fresh efforts to address violence against women and to put women at peace negotiating tables.

But she said the biggest challenges are to change male-dominated "power structures" that leave far more women and girls facing poverty and violence.

Ahead of next year's anniversary events, UN Women has asked all 193 UN member nations to submit details and data on what their countries have done to implement the 1995 Beijing platform, Regner said.

As of Friday, she said, it had received 22 responses but hopes the entire membership will answer. UN Women plans to analyze the data ahead of next year's anniversary, she said.

The Beijing platform called for bold actions in 12 critical areas for women and girls including combatting poverty and violence, improving human rights and access to reproductive and sexual health care, and ensuring that all girls get an education and that women are at the top levels of business and government, and the top table in peace negotiations.

Regner said next year's anniversary events will include the UN Commission on the Status of Women's annual meeting in March 2020 devoted to Beijing's implementation, a high-level meeting when world leaders gather for their annual General Assembly session in September 2020, and a "Global Gender Equality Forum" co-hosted by France and Mexico in France bringing civil society representatives and activists of all ages together to look to the future. No date has been announced yet for that event.

UN Secretary-General Antonio Guterres said at Monday evening's opening of an exhibition on women who were part of the Soviet Union's military effort in World War II that "we will not achieve peace" or any of the UN's development goals for 2030 "without the full and equal participation of women."

"Yet we all know that there is still a stark imbalance of power around the world, and we are even seeing a backlash in some areas against women's rights," he said.

Regner said the majority of countries favor progress on gender equality, but there is "pushback." There are governments and movements, she said, that value "so-called traditional family values and other ideas around women's and men's roles both in families and in societies which do not correspond to international agreements, and which would not necessarily give women the space and possibility to decide over their own lives, bodies, economic empowerment, etc."

Regner, a former Swedish minister, said UN Women's task is to spur implementation of Beijing and other agreements — and "we will never back down."