Russia holds up release of report on DPRK sanctions 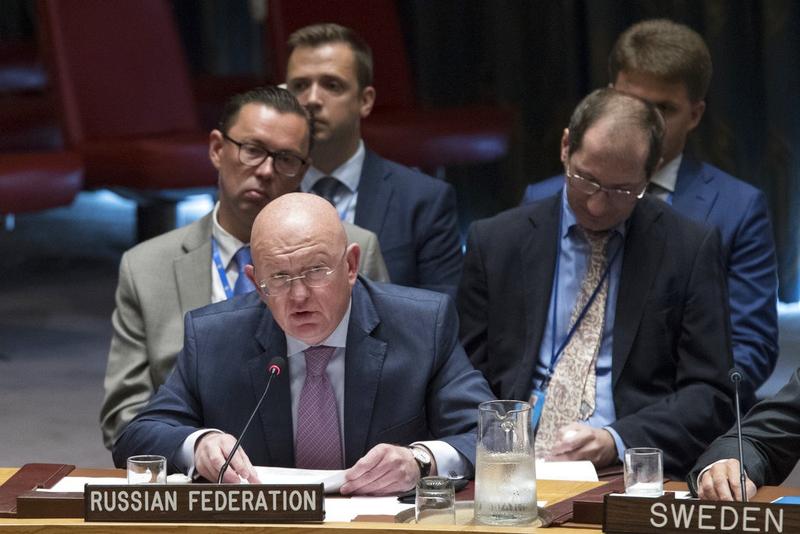 Russian Ambassador to the United Nations Vassily Nebenzia speaks during a Security Council meeting on the situation in the Middle East, Aug 28, 2018 at the United Nations headquarters. Russia said on Aug 30, 2018 it is holding up release of a report by UN experts, who said the Democratic People's Republic of Korea is violating UN sanctions including by not stopping its nuclear and missile programs and by "a massive increase in illicit ship-to-ship transfers of petroleum products." (MARY ALTAFFER / AP)

UNITED NATIONS — Russia said Thursday it is holding up release of a report by UN experts, who said the Democratic People's Republic of Korea (DPRK) is violating UN sanctions including by not stopping its nuclear and missile programs and by "a massive increase in illicit ship-to-ship transfers of petroleum products."

Russia's UN Ambassador Vassily Nebenzia told reporters after a closed Security Council meeting on the report that he was blocking its release "because we disagree on certain elements of the report."

He said Russia also asked for an investigation into regular leaks of reports on the DPRK to the media. The Associated Press and other news organizations reported the panel's latest findings in early August.

Nebenzia didn't disclose Russia's concerns but diplomats, speaking on condition of anonymity because consultations were private, said a key objection was the panel's mention of Russian ships being involved in illegal ship-to-ship transfers.

Britain's UN Ambassador Karen Pierce, the current Security Council president, said there will be informal consultations Friday to determine what Russia's objections are in hopes of finalizing and releasing the report.

"I need to stress that this panel of experts report is independent," she said. "It's an interesting question as to whether you should be objecting to an independent report. But, as I say, the council hopes we can resolve this."

Pierce said the Security Council has been "very strong" on enforcing sanctions against DPRK, "and getting this report out and implemented is the next stage in enforcing the sanctions."

The experts' report read that sanctions against DPRK are also being violated by transfers of coal at sea and the flouting of an arms embargo and financial restrictions.

DPRK also attempted to sell small arms and light weapons and other military equipment via foreign intermediaries, including Syrian arms traffickers in the case of Houthi Shiite rebels in Yemen as well as Libya and Sudan, the report read. And DPRK has continued military cooperation with Syria, in breach of UN sanctions.