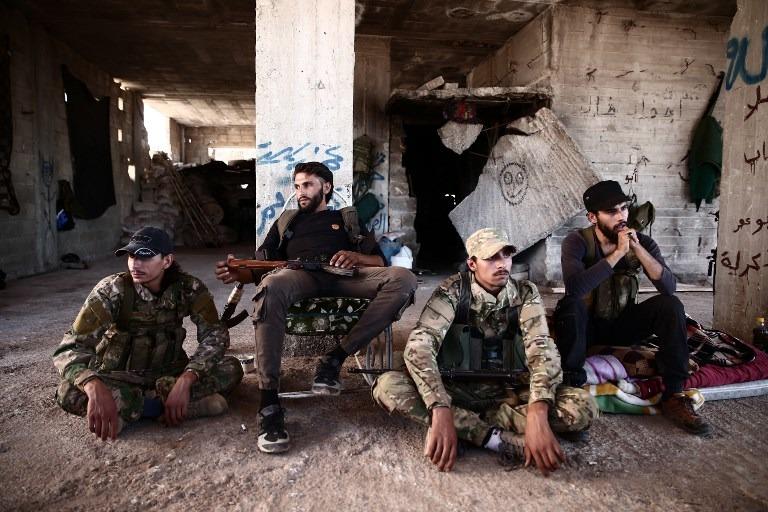 Fighters from the Nureddine al-Zinki unit, a moderate Syrian opposition faction affiliated with the Muslim Brotherhood and made up of former Syrian Free Army fighters, rest in a position in a rebel-held part of Aleppo province that lies directly east of the main opposition bastion in Idlib, Sept 23, 2018. Syrian mainstream rebel groups said on Sept 27 they have growing confidence that their jihadist rivals will comply with a requirement to leave a demilitarized buffer zone set up by Turkey and Russia. (NAZEER AL-KHATIB / AFP)

AMMAN - Syrian mainstream rebel groups said on Thursday they have growing confidence that their jihadist rivals will comply with a requirement to leave a demilitarized buffer zone set up by Turkey and Russia under a deal that averted a Russian-backed Syrian army offensive.

Earlier this month, Turkey and Russia reached an agreement to enforce a new demilitarized zone in Syria’s Idlib region, in which “radical” rebels will be required to withdraw by the middle of next month.

A senior Syrian opposition official said the most powerful jihadist group in the Northwest, Tahrir al-Sham, spearheaded by al-Qaeda's former Syrian offshoot, had sent secret feelers to the Turkish army through third parties in the last few days signaling they would comply.

A senior Syrian opposition official said the most powerful jihadist group in the Northwest, Tahrir al-Sham, had sent secret feelers to the Turkish army through third parties in the last few days signaling they would comply

"Matters are moving well and Tahrir al-Sham has pledged it is going to implement but without announcing its agreement," said the opposition official, who was briefed by Turkish officials and requested anonymity due to the sensitivity of the matter.

The demilitarized zone agreed by Turkey and Russia will be 15 to 20 km deep and run along the contact line between rebel and government fighters. It will be patrolled by Turkish and Russian forces.

The Russian-Turkish agreement hinges on the response of jihadist fighters and could unravel quickly if Moscow and Ankara cannot jointly impose their plan on the Islamist groups.

Another senior opposition figure said he expected the Tahrir al-Sham group to implement the deal and dismissed risks of a showdown because the agreement did not seek to force the jihadist fighters to hand over their weapons.

"I foresee it will be implemented within the time set," said Ahmed Toma, a prominent opposition figure who headed the Syrian rebel delegation in Russian-sponsored talks in the Kazakh capital.

Tahrir al-Sham has yet to declare its stance on the deal, and its position will be critical to its success.

Turkey had thrown its full weight with Russia to avert a major campaign by the Syrian Army to recapture Idlib that the UN warned would bring a humanitarian catastrophe. Ankara pledged to Moscow it would handle the jihadist threat.

A regional intelligence source said the jihadists were softening their stance to avoid deadly internecine fighting with mainstream rebels that could wreck the deal and allow the Syrian army and its Russian ally to resume their stalled offensive.

"I don't expect any hurdles in implementation from all the revolutionary forces at all," said Abdul Salam Abdul Razzak, a leading figure in the National Front for Liberation, the alliance of Turkey-allied Free Syrian Army (FSA) rebel groups.

Turkish President Tayyip Erdogan said in an interview with Reuters late on Tuesday that the withdrawal of “radical groups” had already started.

Several rebel sources said none of the groups, either jihadist or mainstream rebels, had started to pull back.

The National Front for Liberation, which had declared its "complete cooperation" with the Turkish effort, said it foresaw a smooth operation once logistical preparations with Turkey were concluded.

"Pulling heavy arms from the frontline is not a difficult matter as most of these weapons are deployed away from the frontline," Abdul Razzak said, adding the group's only concern was whether the Syrian army and its allies would abide by the deal.