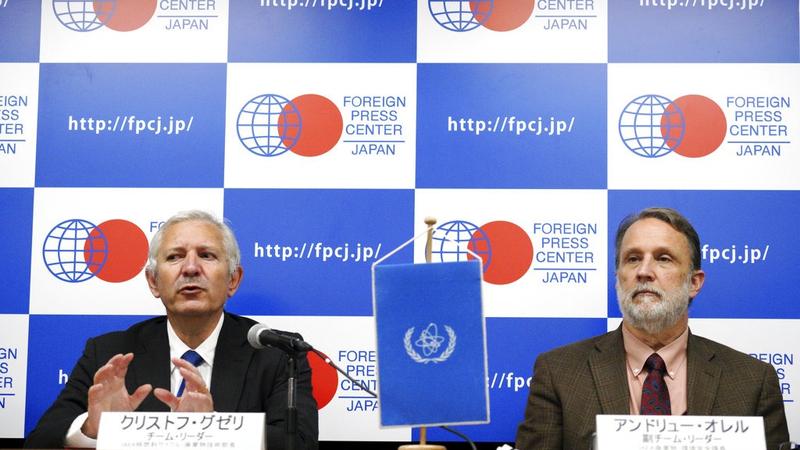 TOKYO — Experts from the International Atomic Energy Agency urged the operator of Japan's tsunami-wrecked Fukushima nuclear plant on Tuesday to urgently decide on a plan to dispose of massive amounts of treated but still radioactive water stored in tanks on the compound.

A government-commissioned panel has picked five alternatives, including the controlled release of the water into the Pacific Ocean, which nuclear experts say is the only realistic option

A 13-member IAEA team told reporters in Tokyo after a weeklong review that managing nearly 1 million tons of radioactive water is critical to the plant's safe and sustainable decommissioning.

The IAEA team said in a preliminary report that hundreds of tanks currently used to store the water over large areas of the plant's compound can only be a temporary solution and must be removed "urgently."

The cores of three reactors at the plant suffered meltdowns following a massive 2011 earthquake and tsunami that devastated parts of northeastern Japan.

Radioactive water has leaked from the damaged reactors and mixed with groundwater and rainwater at the plant. The water is treated and stored in large tanks.

More than 7 ½ years since the accident, officials have yet to agree on what to do with the radioactive water. A government-commissioned panel has picked five alternatives, including the controlled release of the water into the Pacific Ocean, which nuclear experts say is the only realistic option. Fishermen and residents, however, strongly oppose the proposal.

That option faced a major setback this summer when the plant's operator, Tokyo Electric Power Co., acknowledged that the water, which it said had been carefully treated, was not clean enough. It said the water contains cancer-causing cesium and other elements in excess of allowable limits for release into the environment.

The IAEA interim report said TEPCO could run out of space for tanks in a few years, and the water storage adds to safety risks and could hamper the decommissioning of the plant, which is already an unprecedented challenge.

It said the water problem has improved recently because of measures such as an underground frozen wall installed around the reactor buildings to keep the radioactive water from mixing with groundwater. It suggested that TEPCO could further reduce the amount of contaminated water by cutting back on the use of cooling water injected into the reactors because the temperature of the melted fuel has fallen significantly.

IAEA mission leader Christophe Xerri told reporters that it is uncertain whether all of the melted fuel can ever be successfully removed because too little is known about the damage to the cores of the three reactors.

TEPCO and government officials plan to start removing the melted fuel in 2021. Robotic probes inside the reactors have detected traces of damaged fuel but its exact location, contents and other details remain largely unknown.

"If you don't have the information it's very difficult to say it's possible or not" to remove all the fuel, Xerri said.

The team's final report from its review is expected in late January.