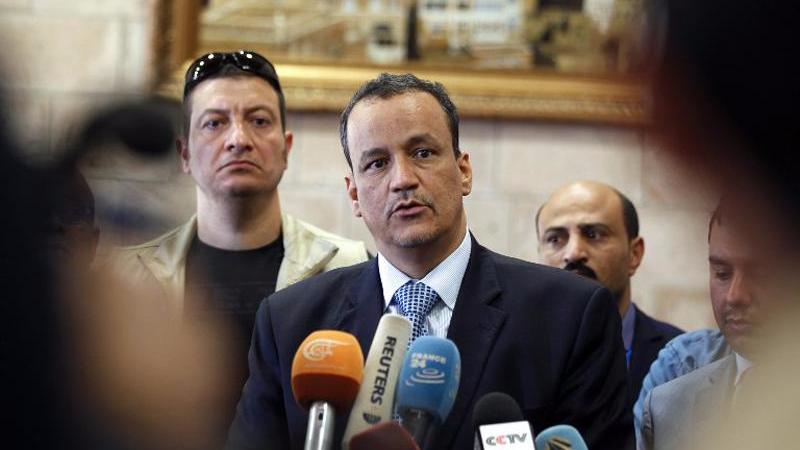 The United Nations Special Envoy to Yemen Ismail Ould Cheikh Ahmed speaks to the press upon his arrival at Sanaa international airport on May 22, 2017.  Ould Cheikh Ahmed on Oct 25, 2017 offered a new proposal to restore confidence and move forward towards a viable negotiated settlement. (PHOTO / AFP)

In a press statement distributed by the UN envoy's office and obtained by Xinhua, Ould Cheikh Ahmed declared his new proposal in a press conference in the Saudi capital Riyadh.

The offer came following the conclusion of the UN envoy's visit to the Saudi kingdom where he met with Yemeni exiled President Abd-Rabbu Mansour Hadi and senior Saudi officials.

"We are currently considering steps that can be taken by all Yemeni rival parties to restore confidence and move forward towards a viable negotiated settlement," Ould Cheikh said.

"These steps are based on three pillars: the re-establishment of the agreement of the cessation of hostilities, re-building confidence measures and the return to the negotiating table with a view to reaching a comprehensive peace agreement," he said.

He said the conflict in Yemen is essentially a "political conflict" that can only be solved through political negotiations.

Ould Cheikh called on all Yemeni parties to make the necessary concessions that could help pave the way for a long-term peace.

For rebel part, the spokesman of the dominant Shiite Houthi rebels, Mohammed Abdulsalam, told the Houthis-owned Almasira TV that his group is open for any solution that can guarantee a long-term peace and end the war.

Abdulsalam, however, repeated his group's official stance from the UN envoy Ould Cheikh, saying "Ould Cheikh is no longer welcomed anymore and this affirmed position came from our assessment of Ould Cheikh's role in his managing the talks as an intermediary."

Houthis gave accused the UN mediator of bias in favor of the coalition countries led by Saudi Arabia against their group.

On June 5, the Houthi group denied the UN envoy access to Yemen over the alleged partiality.

On May 22, protesters in the rebel-held capital Sanaa pelted the motorcade of the UN envoy with stones and shoes as Ould Cheikh was leaving for the airport following his visit to meet Houthi officials in Sanaa.

The envoy was not hurt in the attack, and left the country successfully.

Despite several rounds of previously failed peace mediations, the United Nations envoy is still seeking to mediate a new political settlement in Yemen to end the war that last over two and a half years.

The war pitted forces of the country's internationally recognized government and backed by the Saudi-led coalition against Iranian-backed Shiite Houthi rebels and backed by forces loyal to former president Ali Abdullah Saleh.

The war has killed more than 10,000, mostly civilians, and led to the displacement of 3 million Yemenis.

ALSO READ: Yemen blood bank may be forced to shut due to lack of funds