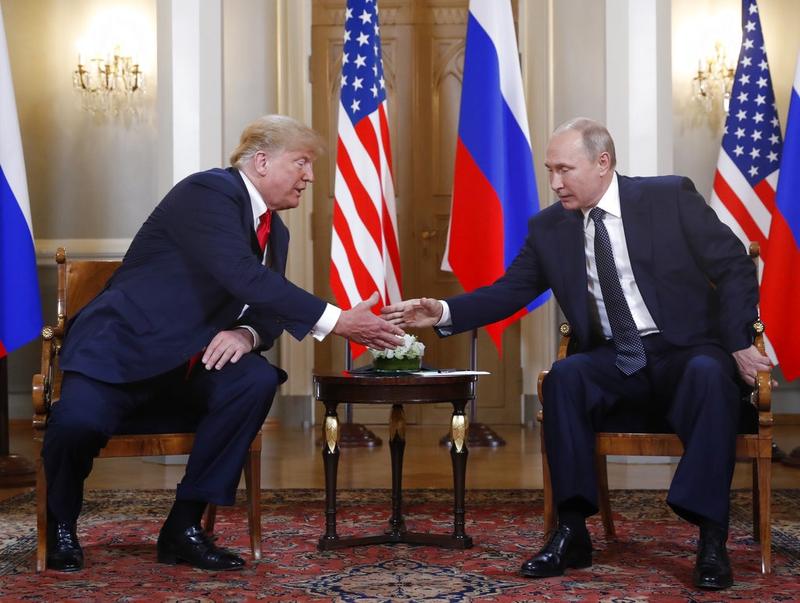 US President Donald Trump, left, and Russian President Vladimir Putin shake hand at the beginning of a meeting at the Presidential Palace in Helsinki, Finland, July 16, 2018. (PABLO MARTINEZ MONSIVAIS / AP)

HELSINKI - Donald Trump met one-on-one with Vladimir Putin behind closed doors on Monday in a long-awaited summit overshadowed by the US president blaming his own country's past "foolishness and stupidity" for the two powers' hostile ties.

Just days after a special prosecutor indicted 12 Russian agents for stealing documents from the Democratic Party to help Trump win the 2016 presidential election, Trump went into his talks with Putin without a word of criticism for Moscow.

Our relationship with Russia has NEVER been worse thanks to many years of US foolishness and stupidity and now, the Rigged Witch Hunt!

Instead, he tweeted: "Our relationship with Russia has NEVER been worse thanks to many years of US foolishness and stupidity and now, the Rigged Witch Hunt!"

The Russian foreign ministry "liked" his words and tweeted back: "We agree".

Trump's opponents at home were furious, with one Democratic congressman saying that Trump had turned the White House into "a propaganda arm for the Kremlin".

After two hours alone in a room with their interpreters, Trump and Putin convened a more traditional-style bilateral meeting, seated at a large conference table surrounded by senior officials from both countries. Trump called the private talks with the Kremlin leader a "good start".

Earlier Trump began the meeting with warm words for Putin, seated next to the Russian leader in an ornate presidential palace in Finland, and said it was a longstanding goal of his to improve US-Russian relations.

"I think we will have an extraordinary relationship. I hope so. I've been saying it, and I'm sure you've heard over the years, and as I campaigned, that getting along with Russia is good thing, not a bad thing," he said.

But to Trump's critics, the friendly words lay in the shadow of his extraordinary denunciation of his own country's prior policies, which he tweeted hours before Putin arrived.

In his public remarks at the outset, he mentioned none of the issues that have lately brought US-Russian relations to the lowest point since the Cold War: Moscow's annexation of territory from Ukraine, its support for Syria's Bashar al-Assad, British accusations that it poisoned a spy, as well as the alleged meddling in both US and European elections. 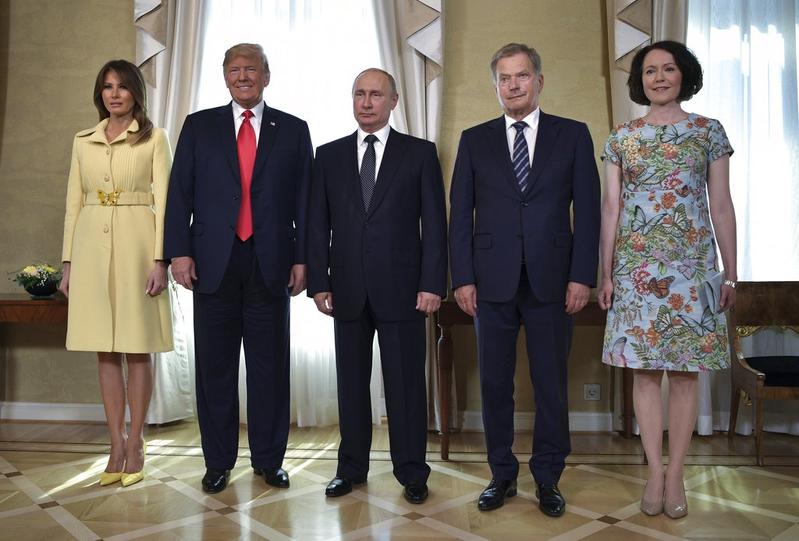 "Our relationship with Russia is strained because of the very malign actions he's refusing to take Russia to task for," tweeted Democratic US Representative Gregory Meeks, a member of the House Foreign Affairs Committee. "Though relations were worse during the Cold War, at least then the US Presidency wasn't a propaganda arm for the Kremlin."

The Kremlin has played down expectations for the summit. It said it did not expect much from the meeting but hoped it would be a "first step" to resolving a crisis in ties.

"Presidents Trump and Putin respect each other and they get along well," Kremlin spokesman Dmitry Peskov said. "There is no clear agenda. It will be determined by the heads of state themselves as they go along."

However, that the summit was taking place at all was a victory for Russia, which has long blamed irrational "Russophobia" for its geopolitical semi-pariah status.

"WHICH TEAM DO YOU PLAY FOR?"

Trump's foes at home have been scathing about his apparent refusal to criticize Putin. His 2016 opponent Hillary Clinton tweeted: "Great World Cup. Question for President Trump as he meets Putin: Do you know which team you play for?"

Russia denies interfering in the US presidential election. The state RIA news agency quoted a Russian source as saying Moscow was "ready to discuss, ready to undertake mutual obligations of non-intervention into internal matters". 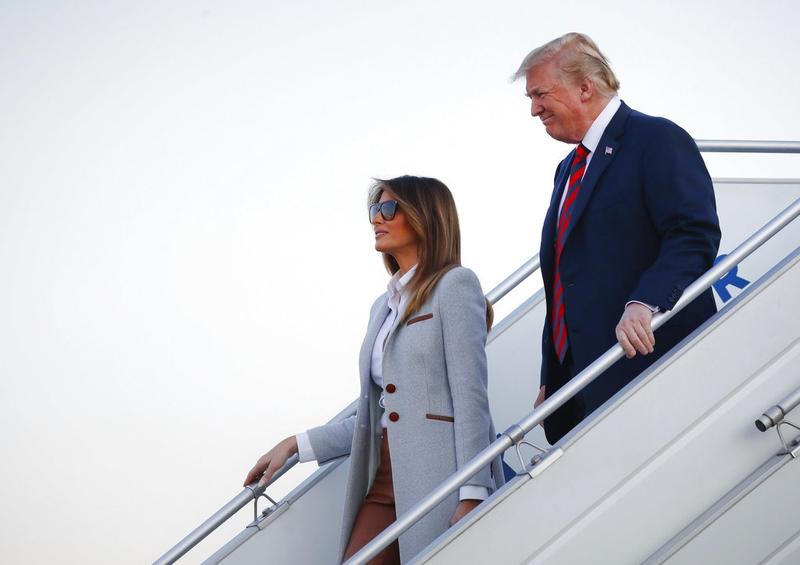 US President Donald Trump and first lady Melania Trump arrive at the airport in Helsinki, Finland, July 15, 2018 on the eve of his meeting with Russian President Vladimir Putin. (PABLO MARTINEZ MONSIVAIS / AP)

Trump has said he will raise the election meddling but does not expect to get anywhere. He has repeatedly noted that Putin denies it, while also saying that it is alleged to have taken place before he became president.

The summit caps a trip abroad during which Trump sternly criticized NATO allies for failing to spend enough on their militaries and embarrassed British Prime Minister Theresa May by saying she refused to take his advice about how to negotiate Britain's exit from the EU. He referred to the European Union itself as a "foe" in trade, and repeatedly criticized it.

In some of the strongest words yet reflecting the unease of Washington's traditional allies, Germany's foreign minister said on Monday Europe could not rely on Trump.

"We can no longer completely rely on the White House," Heiko Maas told the Funke newspaper group. "To maintain our partnership with the USA we must readjust it. The first clear consequence can only be that we need to align ourselves even more closely in Europe."