Glaciers from mountain ranges in Asia vanish faster than expected 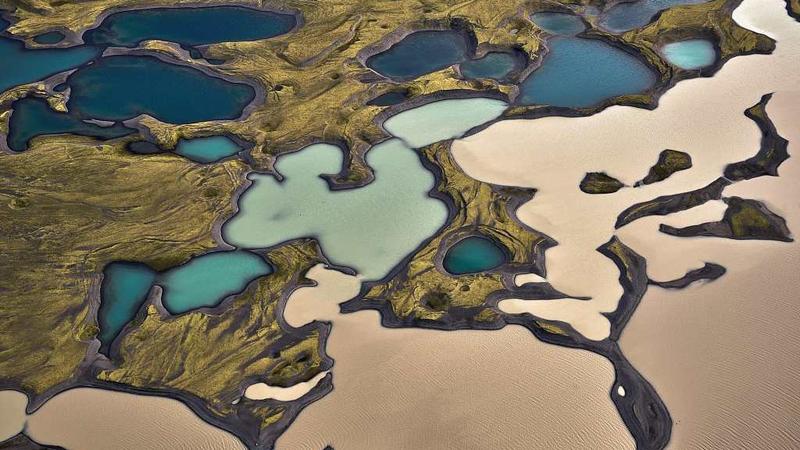 An Icelandic landscape looks like an impressive oil painting from above. (PHOTO / VCG)

Water security is fast becoming a major issue for countries around the world where long-term drought and nonseasonal rainfall are becoming the norm, making reliable water supply uncertain. Many of the world’s glacier systems are melting at a much faster rate than scientists had anticipated, and the cause is global warming.

A new study by the British Antarctic Survey in Cambridge, England, said glaciers from Asia’s mountain ranges including the Himalayas are melting much faster than previously thought and could threaten regional water security within a few decades.

Water from these glaciers feeds into Asia’s biggest river systems, which are lifelines for millions of people.

The study, “Asia’s shrinking glaciers protect large populations from drought stress”, was written by glaciologist Hamish D. Pritchard and published online by the science magazine Nature on May 29.

Meltwater from glaciers in Asia’s mountain ranges, including the Himalayas, meets basic water needs of about 221 million people each year. But that store of freshwater is shrinking. “Glaciers are slow-moving parts of the hydrological cycle, but they aren’t static,” Pritchard said.

Each year they accumulate new snow in the upper glacier and lose old ice to melting from the lower glacier.

“But warming has caused the melting of many of these glaciers to increase, so they are no longer in balance and are shrinking. In other words, more water is being released each year than is being replenished by new snow.”

Willem Vervoort, associate professor of hydrology and catchment management at the University of Sydney’s School of Life and Environmental Sciences, said glacial melt is not only accelerating in Asia but around the world.

“At some point in the future, glaciers will stop rebuilding and a major source for water will dry up, impacting on the lives of millions of people. In Asia it could affect 200 million or more people,” he said.

The United Nations projects that by 2025, half of the countries worldwide will face water stress or outright shortages. By 2050, as many as three out of four people around the globe could be affected by water scarcity, many of them in Asia.

The Manila-based Asian Development Bank said the region is a global hot spot for water insecurity. It remains home to 60 percent of the world’s population and half of the world’s poorest people.

Agriculture continues to consume 80 percent of the region’s water resources. A staggering 1.7 billion people lack access to basic sanitation, and with a possible population of 5.2 billion by 2050, the region’s finite water resources will be placed under enormous pressure.

ADB estimates indicate that up to 3.4 billion people could be living in water-stressed areas of Asia by 2050.

It said water remains crucial to the economic well-being of the region, but at the same time acknowledges the severe impact climate change is already having on water security.

Daniel Fagre, a research scientist with the US Geological Survey Global Change Research Program, has been measuring glacial melt in Glacier National Park, Montana, for more than a decade now.

When US President William Taft created Glacier National Park in 1910, it was home to an estimated 150 glaciers. Since then, the number has fallen to fewer than 30, and most of those remaining have shrunk in area by two-thirds.

Pritchard said that in years of average summer rainfall, the glaciers contribute only a small fraction — a few percent — of the water flowing down Asia’s major rivers.

“If the glaciers were lost, the effect might be quite large for hill communities but quite small farther downstream. This changes in droughts, though.

“In a drought, the rain-fed water supplies dry up, but the glacier melt isn’t affected by the drought. It just keeps coming. It makes up a bigger fraction of the drought water supply, just when water stress for the communities downstream is peaking.”