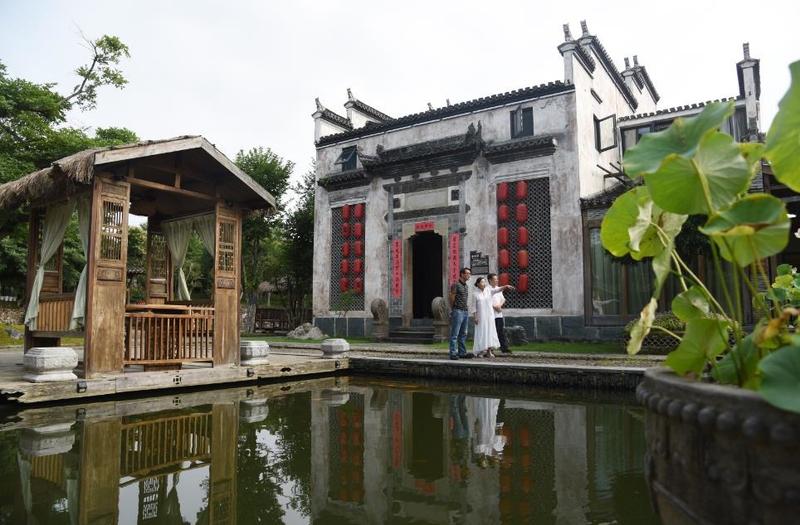 Liu Fang, center, a guesthouse owner in Wuyuan, a county in Jiangxi province, informs her guests about the history of Huizhou-style antique houses on June 28, 2019. (PHOTO / XINHUA)

Curiosity and a sense of adventure among wanderlust-bitten Chinese travelers are imparting an exciting touch to the business of holidays, encouraging people to go beyond conventional hotel stays and soak in new experiences through vacation rentals, a report has found.

Released by the State Information Center, the report said China's short-term lodging sector, which includes the segment of homestays, is booming, thanks to its relatively lower costs, conveniences and novel experiences on offer.

The sector now boasts more than 4 million landlords or innkeepers and nearly 80 million users, according to the report.

According to the report, Chengdu in Sichuan province topped all other cities in terms of the number of active users, followed by the three municipalities of Beijing, Shanghai and Chongqing, and Xi'an in Shaanxi province.

The report said an increasing number of younger people prefer to list their properties on such platforms or rent properties listed on them. Some 70 percent of the hosts and landlords on major short-term accommodation platforms were born in the 1980s and 1990s.

Females (60 percent) outnumber males among hosts or landlords on such platforms. Among all room guests, more than 70 percent are aged between 18 and 35.

To better develop the sharing economy, we need to learn from the experience so far and from lessons in the consumer internet field, so as to grasp new opportunities brought by the industrial internet

Jiang Qiping, Secretary-general of the Center for Informatization Study

Family vacations, with pets as part of the touring party, are a new trend. Nearly 39 percent of those booking short-term accommodation on platforms bring along their families. More than 40 percent of platform users have pets, among which nearly 67 percent prefer taking pets along.

With people's consumption power growing and their demand for high-quality services increasing, users will choose comfortable middle-and high-end accommodation instead of cheap ones. Therefore, participants will focus on offering mid-level and high-end homestays, according to the report.

Quality is the new buzzword in China's sharing economy as focus shifts from speedy business expansion. According to the report, the annual growth rate of short-term lodgings is expected to remain around 50 percent in the next three years.

Jiang Qiping, secretary-general of the Center for Informatization Study, which is part of the Chinese Academy of Social Sciences, said China's sharing economy will continue to expand, which will bring a wide range of services to people.

"To better develop the sharing economy, we need to learn from the experience so far and from lessons in the consumer internet field, so as to grasp new opportunities brought by the industrial internet," he said.

Jiang said the key is to strengthen self-regulation in the emerging sector and create a better environment for its further development.

"On the one hand, providers of short-term accommodation should become both supervisors and defenders of the sector, fully taking the responsibility for its present and future, in terms of service quality and safety. On the other hand, the government needs to strengthen the supervision and administration of the market and widen market access," he said.