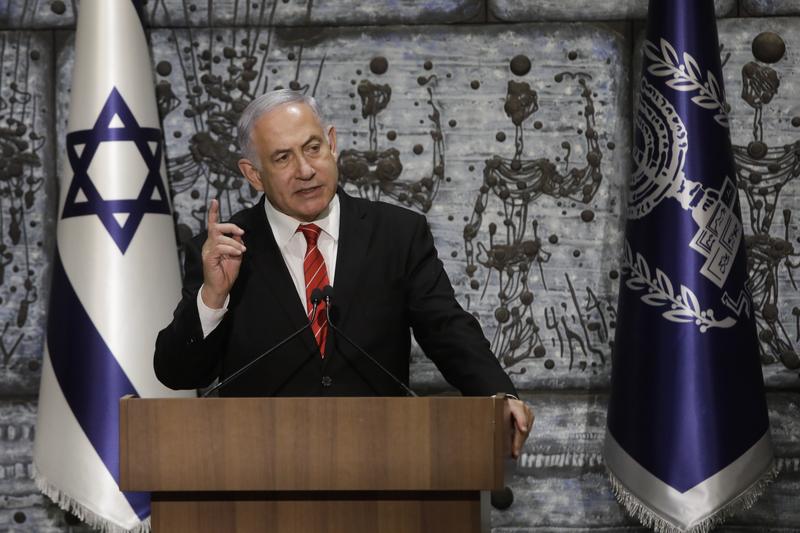 JERUSALEM — Israeli Prime Minister Benjamin Netanyahu on Thursday began the daunting task of trying to cobble together a coalition government amid political deadlock that emerged from this month's repeat elections, which had no clear winner.

He now has up to six weeks to attempt to resolve the political impasse, but his odds appear slim.

Even with the support of smaller allies, both Netanyahu and his main challenger, former army chief Benny Gantz, lack the support for the required 61-seat parliamentary majority needed to establish a government. That's including the support of Netanyahu's traditional ultra-Orthodox and religious-nationalist allies.

After three years of a deluge of biased, partial leaks, it's time for the public to hear everything. My side too

On Thursday, the two largest parties were jockeying ahead of a planned meeting by their negotiating teams the following day, with each side blaming the other for the stalemate.

"There are no rabbits in the hat. There are no tricks. There is no option" other than unity, said Zeev Elkin, a lawmaker with Netanyahu's Likud party. He told Israeli Army Radio that if Gantz's Blue and White party "continues to rule out Netanyahu on a personal basis and continues to rule out certain parties from sitting in that same unity government, at the end we may head to elections for a third time."

Blue and White wants Gantz to lead any unity government and refuses to sit in a coalition with Netanyahu so long as he faces likely indictment for a series of corruption scandals. Blue and White also objects to sitting with the right-wing and religious bloc that Netanyahu says he's committed to bringing into any government he forms.

Looming large over the political jostling is Netanyahu's legal woes. Israel's attorney general has recommended charging Netanyahu with bribery, fraud and breach of trust in a series of scandals and the embattled leader is set to appear at a hearing next week on the charges.

Netanyahu has denied wrongdoing and on Thursday called on Israel's attorney general to have the hearing broadcast live for the sake of "transparency."

"After three years of a deluge of biased, partial leaks, it's time for the public to hear everything. My side too," Netanyahu said in a video statement. "Not only do I have nothing to hide, I want everything to be heard."

Netanyahu, popularly known as Bibi, again urged Gantz to join him in a unity government during a rally late Thursday.

Gantz dug in his heels Thursday afternoon, repeating his objection to sitting with Netanyahu. He called on Likud to negotiate "with no pre-conditions" to avoid a third election.

President Reuven Rivlin selected Netanyahu on Wednesday as the candidate with the best chance of forming a government. That move came after Rivlin failed to broker a unity government between Netanyahu and Gantz in recent days. A unity government appears to be the preferred option for both sides, but they remain far apart on what such a constellation would look like.

According to the final official results from the Sept 17 elections, Blue and White finished first with 33 seats in the 120-seat parliament, just ahead of Netanyahu's Likud with 32 seats.

Neither side can form a government without the eight seats held by maverick former Defense Minister Avigdor Lieberman, who supports bringing the two main parties into a unity government shorn of Netanyahu's traditional allies. Netanyahu has welcomed a unity government but has insisted on one that includes those partners.

If Netanyahu fails to form a government before time runs out, Rivlin can then ask Gantz to try. If he too doesn't succeed, Rivlin can select another legislator or he can set in motion what would be unprecedented third elections.

Netanyahu is not required by Israeli law to step down if he is indicted but will face heavy pressure to do so.