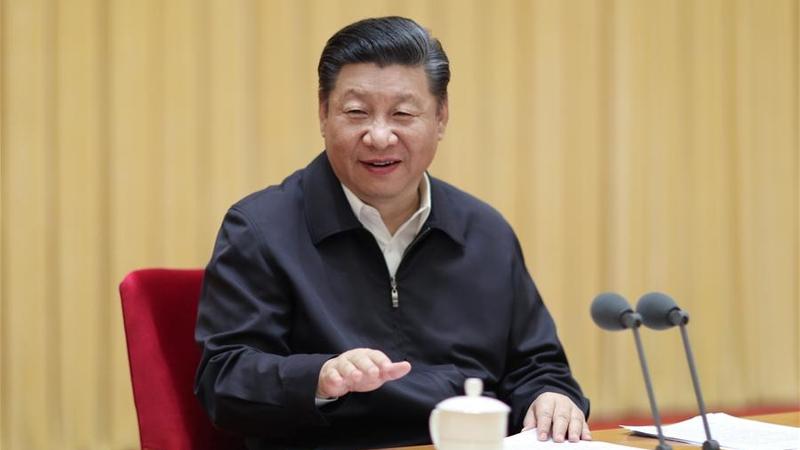 Chinese President Xi Jinping, also general secretary of the Central Committee of the Communist Party of China (CPC) and chairman of the Central Military Commission, delivers a speech at the Central Conference on Work Relating to Foreign Affairs held in Beijing, China, June 22-23, 2018. (JU PENG / XINHUA)

BEIJING - Xi Jinping, general secretary of the Communist Party of China (CPC) Central Committee, has stressed the importance of the Party's political direction.

Political direction determines the future of the Party and the cause, Xi Jinping, general secretary of the Communist Party of China (CPC) Central Committee said

The CPC must regard political direction as the Party's fundamental premise so as to provide an important guarantee for the Party to march from victory to victory, Xi said Friday when presiding over a group study session of the Political Bureau of the CPC Central Committee.
"If a Marxist political party loses its advanced nature in politics, there will be no purity and advanced nature of the party," Xi said.

Xi stressed upholding the authority and the centralized, unified leadership of the CPC Central Committee as essential to adhering to the Party's political leadership.

All Party members must be guided to strengthen their consciousness of the need to maintain political integrity, think in big-picture terms, follow the leadership core, and keep in alignment, and closely follow the Central Committee in terms of thinking, political orientation, and actions.

He called on efforts to win the people's support and pool the wisdom and strength of the people.
Long-term efforts must be made to create a sound political ecosystem, he said.

"Our Party was born during domestic turmoil and foreign aggression and has grown after enduring hardships and frustrations, and it becomes stronger by overcoming risks and challenges," Xi said, noting the Party has always been ready to protect against potential dangers and risks.

He pledged continued efforts to combat corruption so that the Party will never change its nature.
Party officials must enhance their abilities to base their work on the correct direction, the trend and the overall picture, differentiate right from wrong, maintain political orientation, manage political situations, and guard against political risks, Xi said.