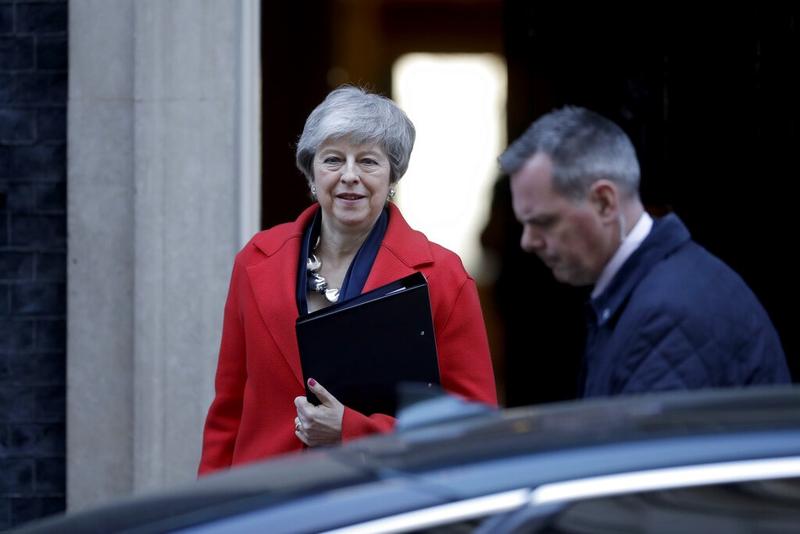 Britain's Prime Minister Theresa May leaves 10 Downing Street to make a statement to the Houses of Parliament in London, Feb 26, 2019. (MATT DUNHAM / AP)

LONDON — British Prime Minister Theresa May on Tuesday offered lawmakers the chance to vote in two weeks for a potentially disorderly no-deal Brexit or to delay Britain's exit from the European Union if her attempt to ratify a divorce agreement fails.

In a move which pushes back the Brexit cliff edge by three months to the end of June, May announced she was to give the lawmakers two votes on March 13-14 if she failed to get a deal approved by March 12

Opening up the possibility of a delay and removing the immediate threat of a no-deal exit on March 29 marks one of the biggest turning points in the United Kingdom's labyrinthine Brexit crisis since the 2016 referendum vote to leave the EU.

In a move which pushes back the Brexit cliff edge by three months to the end of June, May announced she was to give the lawmakers two votes on March 13-14 if she failed to get a deal approved by March 12.

The government would allow a vote on March 13 at the latest asking whether lawmakers supported leaving without a deal. If they rejected such an option, on March 14 they would vote on a "short, limited extension" Brexit delay.

"The United Kingdom will only leave without a deal on March 29 if there is explicit consent in the House for that outcome," May said, though she was clear that the British government was not removing the ultimate threat of a no-deal Brexit.

"An extension cannot take no deal off the table," May said. "The only way to do that is to revoke Article 50, which I shall not do, or agree a deal."

May said any extension, not beyond the end of June, would almost certainly have to be a one off and that her government must honor the decision to leave the EU because the credibility of British democracy was at stake.

The EU would be ready to approve a short Brexit delay should Britain need more time to ensure parliamentary ratification of their divorce agreement, three EU officials said.

"If a request for a delay of the Brexit date is submitted, it would be considered favorably," a senior EU official said. "We have not seen a request but an extension of a couple of months would be relatively straightforward."

May said any extension, not beyond the end of June, would almost certainly have to be a one off and that her government must honor the decision to leave the EU because the credibility of British democracy was at stake

Another EU official said it was "good to see rational arguments being heard" in Britain. A third person, speaking on condition of unanimity, said this would be "in line" with EU thinking on how to get to a final Brexit deal.

After parliament voted 432-202 against her divorce deal in January, May is trying to negotiate changes to the exit deal she agreed with the EU last year and had promised to bring it back for approval in parliament by March 12 at the latest.

With just a month to go until Brexit, the ultimate outcome remains unclear with scenarios ranging from a last-minute deal to another referendum that May has warned would reopen the divisions of the referendum or even scupper Brexit.

May's decision to give lawmakers more say over the outcome was an attempt to see off a rebellion by lawmakers and ministers in her own party who had warned they could vote on Wednesday with opposition parties to grab control of Brexit.

A delay would increase the chances of a reversal of Brexit, especially as the opposition Labour Party is tilting towards supporting another referendum.

Jacob Rees-Mogg, a leading Brexit-supporting lawmaker in May's party, said it would be a "grievous error" if May's offer to delay leads to Brexit being thwarted.

"If it's being delayed, which is my suspicion, as a plot to stop Brexit altogether then I think that would be the most grievous error that politicians could commit," he said.

Another Brexit supporter in May's party, Andrew Bridgen, said taking no-deal off the table would remove any pressure on the EU to do a deal and that it was unclear how the government would vote if it failed to get a deal approved.

Both of Britain's main parties are under intense pressure to change course on Brexit: both are deeply divided though both are officially committed to implementing Brexit.

Opposition Labour leader Jeremy Corbyn said on Tuesday that even if May got her Brexit deal approved by parliament then it should be put to a "confirmatory" public vote.

"The prime minister's botched deal provides no certainty or guarantees for the future and was comprehensively rejected by this House," Corbyn told parliament.

Corbyn said May was running down the clock in a "grotesquely reckless" way. "This is not dithering, it's a deliberate strategy to run down the clock."

But the tilt towards another referendum raises problems for Labour, many of whose traditional voters supported leaving the EU.

The 2016 referendum, in which 17.4 million voters backed leaving and 16.1 million backed staying, showed a country divided about much more than the EU, and has fuelled soul-searching about everything from secession and immigration to capitalism and modern Britishness.

The crisis has left allies and investors puzzled by a country that was for decades touted as a confident pillar of Western economic and political stability.