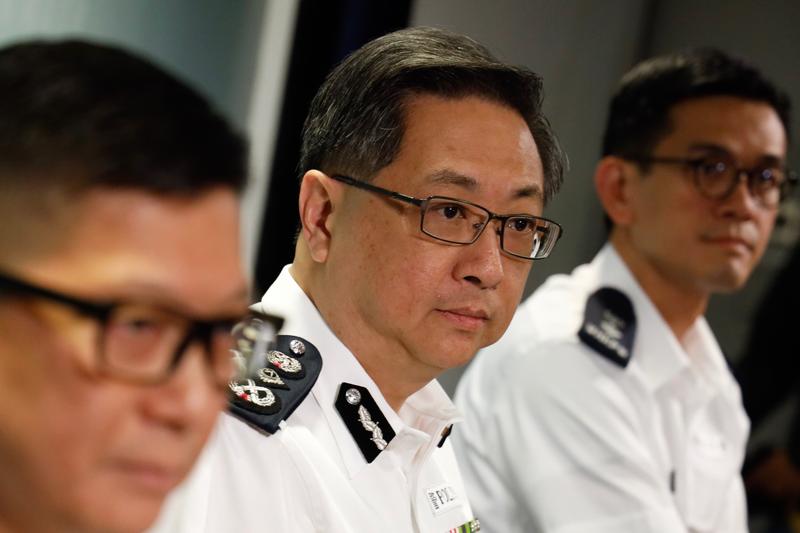 Police Commissioner Stephen Lo Wai-chung rejected criticisms that “unnecessary and excessive force” had been used on the protesters, saying his officers had exercised utmost tolerance and restraint in controlling the protest, which turned into a riot.

More than 100 people, including police officers, were injured in the clashes that brought much of the city’s central business district to a standstill.

Lo addressed the media at a press conference a day after the police tried to disperse thousands of demonstrators who had converged outside the Legislative Council Complex and Central Government Offices in Admiralty, using pepper spray, tear gas, rubber bullets and beanbag rounds.

He said the riot gear used is a standard kit for dealing with similar violent disturbances by law enforcement agencies worldwide. The police weapons have low destructive power and the police had acted in strict accordance with the guidelines on the use of force.

Lo said the police had been “tolerant” and exercised “restraint” until around 3 pm on Wednesday when the police declared the incident a riot after a large number of organized protesters charged at the cordon line, hurling bricks, metal poles, wood planks and metal barricades at officers.

Lo explained that the police were forced to take whatever action necessary for their personal safety, and ensure the effective operation of the legislature, as well as to protect the safety of LegCo staff.

“I strongly condemn the violent behavior of the rioters,” said Commissioner of Police Stephen Lo, noting that 22 police officers were injured in the confrontation

“I strongly condemn the violent behavior of the rioters,” said Lo, noting that 22 police officers were injured in the confrontation.

The police, as always, will carry out a comprehensive review of its actions following Wednesday’s incident, he said.

Lo appealed to Hong Kong residents to express their views in a peaceful, rational and lawful manner.

The police action has been praised by various sectors of the community.

A joint statement issued by 47 former and incumbent heads of Fight Crime Committees in all of Hong Kong’s 18 districts spoke highly of the way police officers had handled the incident.

The statement criticized the protesters’ behavior as violent, dangerous and an act of that could be deadly, while the police had acted with professionalism and restraint, and had used lawful and limited force on the demonstrators.

He said officers had used appropriate force only when protesters almost forced their way into the LegCo Complex.

Compared with other countries and regions around the world, the “extremely forbearing” Hong Kong police force is among the most well-behaved law enforcement agencies.

Lawrence Ma Yan-kwok -- chairman of the Hong Kong Legal Exchange Foundation – said what the police had done was appropriate and reasonable due to the violent behavior and radicalism of the protesters.

He said the police were forced to use a higher degree of force to bring the situation under control.

Section 10 of the Police Force Ordinance stipulates that the duties of the police force shall be to take lawful measures to preserve the public peace and prevent injury to life and property, as well as to regulate processions and assemblies in public places.

Wednesday’s protest paralyzed traffic in Central and Admiralty, and forced the second reading of the amended rendition bill in LegCo to be delayed until further notice.

So far, 11 people have been arrested for riot-related offenses, including causing disorder in public, unlawful assembly and assaulting police.