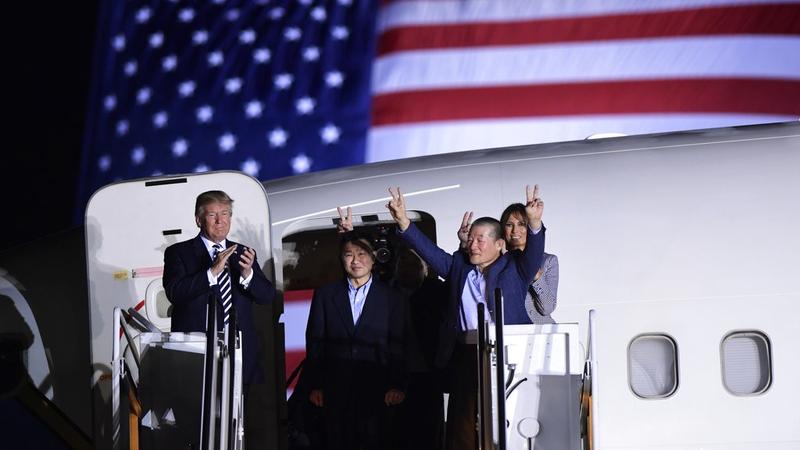 US President Donald Trump, from left, greets Tony Kim, Kim Hak-song, seen in the shadow, and Kim Dong-chul, three Americans detained in the Democratic People's Republic of Korea for more than a year, as they arrive at Andrews Air Force Base in Maryland, May 10, 2018. First lady Melania Trump also greet them at right. (SUSAN WALSH / AP)

Welcoming the three Americans at a military base outside Washington early Thursday, Trump said of Kim, "I really think he wants to do something."

He added of the talks between his administration and the DPRK government, "It's never been taken this far."

The plane carrying the Americans released by the DPRK landed at a military base near Washington early on Thursday.

The DPRK released the three - Kim Dong-chul, Kim Sang-duk, also known as Tony Kim, and Kim Hak-song - and handed them over to US Secretary of State Mike Pompeo in Pyongyang on Wednesday, clearing a major obstacle to an unprecedented summit between Trump and DPRK leader Kim Jong-un.

Trump and First Lady Melania walked up the stairs to board the plane after it landed at Joint Base Andrews, a military base outside Washington DC, at around 2:40 am (0640 GMT).

They emerged a few minutes later with the three former detainees to the cheers of watching military personnel. All three former prisoners smiled. Two lifted their arms above head with and made "V for victory" signs.

“The fact that we were able to get them out so soon was really a tribute to a lot of people including a certain process that’s taking place right now.”

Referring to the possibility of reaching a denuclearization deal with DPRK, Trump said: "We will see if we can do something that people did not think was going to happen for many, many years and a lot of bad things could have happened in between."

"My proudest achievement will be - this is part of it – when we denuclearize that entire peninsula," he said, adding that he really believed the Kim Jong-un wanted to bring his country "into the real world."

"We very much appreciate that he allowed them to go before the meeting," he said. "It's a very important thing to all of us.

"I think we have a very good chance of doing something very meaningful," Trump said of the planned summit.

DPRK state media said the men, one of whom had been held since 2015 and the other two since last year, were arrested either for subversion or "hostile acts" against the government. 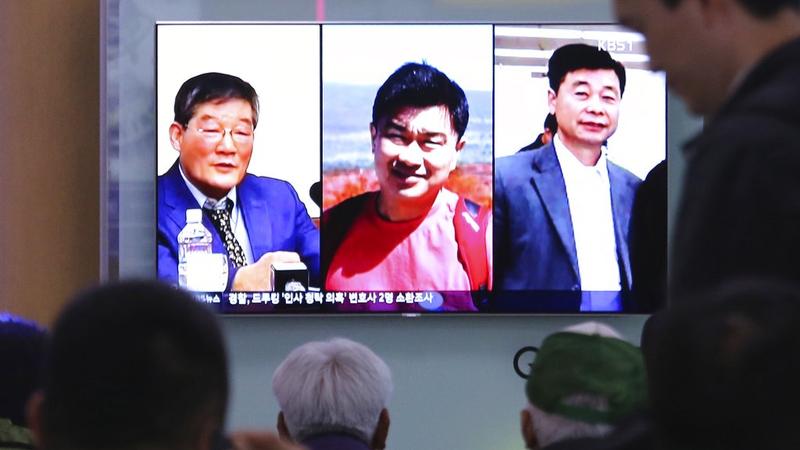 Until now, the only American released by DPRK during Trump’s presidency was Otto Warmbier, a 22-year-old university student who returned to the United States in a coma last summer after 17 months of captivity and died days later.

Trump said he wanted to pay his "warmest respects" to Warmbier's parents.

"He was a great young man who really suffered," Trump said.

The men were freed after Pompeo traveled to the DPRK capital to meet the DPRK leader for the second time in less than six weeks to prepare a first-ever meeting between sitting US and DPRK leaders.

The fate of the three had been among a number of delicate issues in the run-up to the summit aimed at defusing a crisis over DPRK's development of nuclear missiles capable of reaching the US.

A DPRK official informed Pompeo that Kim had granted the three "amnesty," according to a senior US official present for the exchange.

The men walked without assistance to the US government plane that flew them out of Pyongyang and were in the air less than an hour after leaving custody. A White House spokeswoman said they would be taken to Walter Reed National Military Medical Center in nearby Maryland for further medical evaluation.

The release was praised by the White House as a "gesture of goodwill" and appeared to signal an effort by Kim to set a more favorable mood for the summit. It followed his recent pledge to suspend missile tests and shut a nuclear bomb test site.