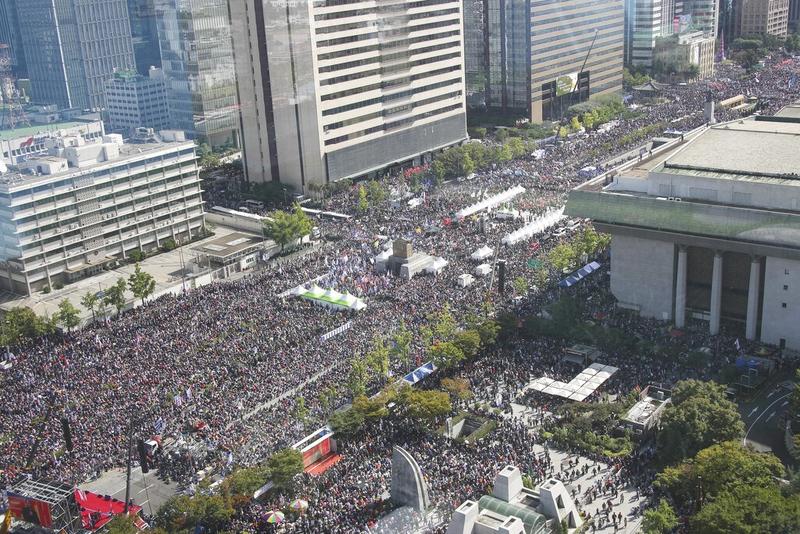 SEOUL, South Korea — Thousands of protesters rallied Wednesday in South Korea's capital for the second consecutive week to call for the ouster of President Moon Jae-in's hand-picked justice minister, whose family is at the center of an investigation into allegations of financial crimes and academic favors.

The protest near the presidential palace in Seoul followed a weekend demonstration in which a huge crowd of pro-government supporters occupied streets in front of the state prosecutors' offices to show their support for Cho Kuk, whose appointment last month has deepened the nation's political divide.

The city's streets are now divided between pro-Cho and anti-Cho protesters, who for weeks have alternated with protests and counter-protests in areas separated by the Han River that flows through the capital

The city's streets are now divided between pro-Cho and anti-Cho protesters, who for weeks have alternated with protests and counter-protests in areas separated by the Han River that flows through the capital.

Wednesday's rally came amid a highly-publicized investigation of Cho's university professor wife and other relatives over allegations of shady financial investments and fraudulent activities related to his daughter's admission to a top university in Seoul and a medical school in Busan.

Cho, who previously served as Moon's senior secretary for civil affairs, has denied any wrongdoing and vowed to push ahead with plans to reform the country's justice system, including curbing the powers of mighty state prosecutors, even as they conduct a criminal probe into his family.

Carrying the South Korean flag and banners and signs that read "Arrest criminal Cho Kuk," the protesters poured onto a major boulevard near Gwanghwamun Gate, the same streets where millions marched for months three years ago in unified anger against Moon's conservative predecessor Park Geun-hye. She was removed from office in March 2017 and is currently serving a decades-long prison term over bribery and abuse of power.

"We need to fight and avenge against a government that has ripped the country in two," Shin Hye-sik, a conservative activist, told the crowd from a stage. "Let's fight! Let's win!"

Chun Gwang-hun, a right-wing Christian pastor and one of the protest organizers, accused the ruling liberals of mobilizing its supporters to defend Cho and called for Moon to step down.

Some of the protesters pushed and shoved with a few Cho supporters who showed up before police broke up the scuffle. There were no immediate reports of major clashes or injuries.

Hwang Kyo-ahn, leader of the conservative opposition Liberty Korea Party, participated in the protest along with members of the party's leadership, but did not speak on the stage. 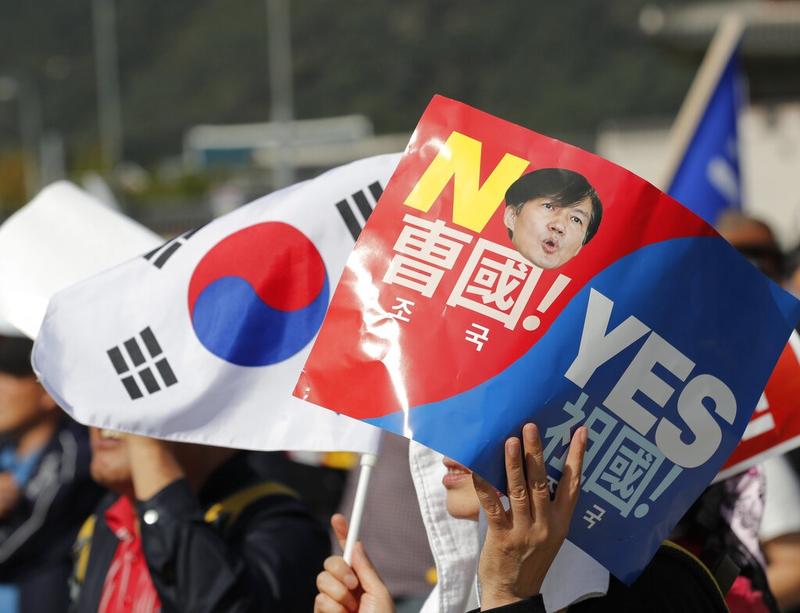 A demonstrator holds a national flag and sign with a picture of South Korea's Justice Minister Cho Kuk during a rally in Seoul, South Korea, Oct 9, 2019. (LEE JIN-MAN / AP)

The conservatives say the ruling liberals are pressuring a legitimate probe of a key government member, and that the investigation itself is proof of prosecutors' neutrality and independence from political influence

Police did not release an estimate on the size of Wednesday's crowd, which appeared to be in the tens of thousands. It was clearly a smaller gathering than the previous anti-Cho protest on Oct. 3, which experts said may have drawn hundreds of thousands.

Cho's supporters are planning to hold another rally on Saturday.

Lawmakers from Moon's Minjoo Party, who have been encouraging government supporters to take to the streets, say prosecutors are pushing an excessive probe in a possible attempt to resist Cho's planned reforms. They have accused prosecutors of leaking investigative secrets to their conservative opponents, who have aired detailed allegations against Cho's family in public.

The conservatives say the ruling liberals are pressuring a legitimate probe of a key government member, and that the investigation itself is proof of prosecutors' neutrality and independence from political influence.

"To be honest, there were many moments each day that were painful and difficult," Cho said Tuesday during a news conference to announce his planned reforms, apparently referring to the controversy surrounding his family. "But I have been enduring every day thanks to the strength of our people who have given me courage and wisdom to push through and complete the reform of the prosecution."

Cho's plans include reducing the number of criminal investigations directly initiated by prosecutors, who by law have exclusive authority to indict and seek warrants for suspects and exercise control over police investigations. Critics say South Korean prosecutors have too much power and this has prompted past governments to use them as a political tool to suppress opponents.

The intense wrangling over Cho has tarnished Moon's reformist image and sank his popularity to the lowest levels since he took office in May 2017, according to recent surveys. Moon also faces pressure over a weakening job market, a messy trade war with Japan and a lack of progress in diplomacy with nuclear-armed neighbor.

A plunge in popularity could be damaging for the liberals ahead of crucial parliamentary elections due in April.