No money, no problem 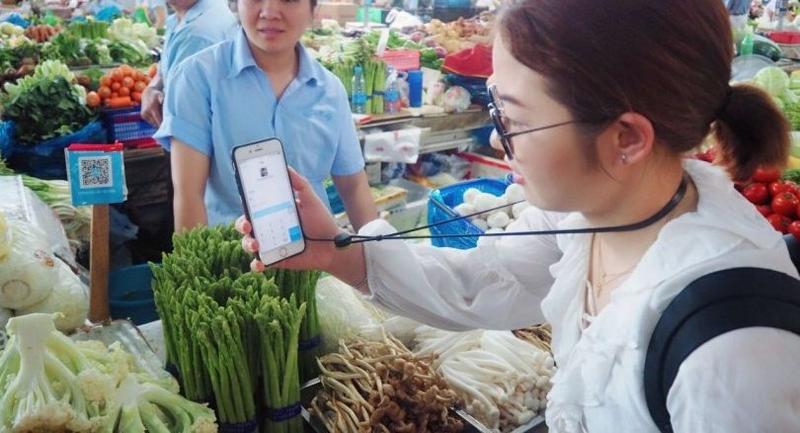 In this undated photo, a woman scans a QR code with her mobile phone to pay for vegetables at the stall of Jiang Goufang, left, at Wen’Er street vegetable market in Hangzhou, China. (POON SOOK YEE / THE NATION)

HANGZHOU -  Who doesn’t like cash? Our love affair with the stuff is millennia old and still going strong everywhere.

Everywhere except for Hangzhou, that is. The nine million residents of this city in eastern China are proud of belonging to a “cashless” society thanks to the payment apps in their smartphones.

Cash may be king elsewhere, but here, the smartphone reigns.

The largest cashless city in the world is home to tech giant Alibaba, which pioneered Alipay, China’s most popular online payment platform.

Mobile payments in China now total about US$16 trillion annually, according to the Financial Times. The market is dominated by China’s two tech titans – Alibaba and Tencent

Mobile payments in China now total about US$16 trillion annually, according to the Financial Times. The market is dominated by China’s two tech titans – Alibaba and Tencent.

Alipay, operated by Alibaba-related Ant Financial Services Group, accounts for about 54 per cent of China’s online payment market, while Tencent’s WeChat Pay hosts 40 per cent, according to www.marketingtochina.com.

Alipay now has over 870 million users globally, 520 million in China alone. The WeChat app meanwhile boasts 1,040 million active users per month in the first quarter of 2018.

In a recent visit to Ant Financial headquarters in Hangzhou, the writer joined a group of international journalists on a trip through the world’s most digitally integrated supply chain and saw how the city is fast developing into a cashless world.

Barcodes in the blue colors of Alipay and green of WeChat Pay are seen at every shop and service, from street stalls to department stores and public buses.

Whether it’s a small stall in a back street selling plum juice for 12 yuan (US$1.80), or a 400-year-old traditional Chinese medicine shop, customers can pay with their phones.

The city is so advanced that customers can “smile to pay” at a KFC restaurant. In alliance with Ant Financial, the KFC facial-recognition service allows customers to pay simply by smiling at one of the fast food restaurant’s self-service screens.

During tours at a night market, fresh market and walking street, all vendors and users whom The Nation spoke to echoed the same points: app payment is very convenient, and solves the problem of fake banknotes and of losing your wallet or cash.

A spokesman from Ant Financial told us of a “dramatic” robbery in which thieves had struck at three convenience stores, but they managed to get away with just 500 yuan.

This is the benefit of a cashless society, he said. 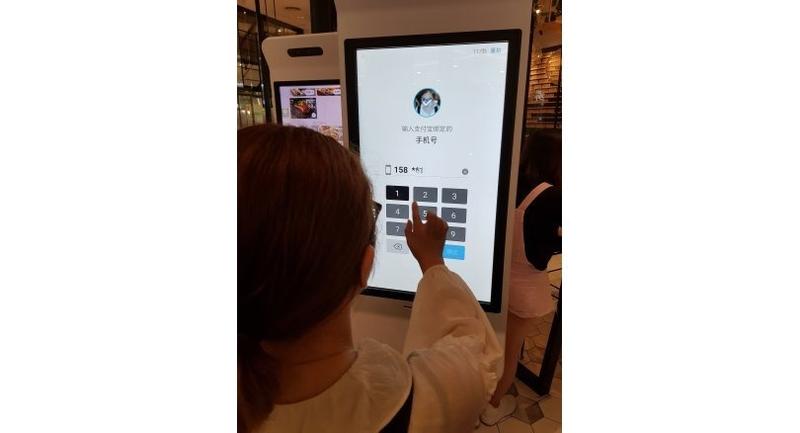 In this undated photo, a customer smiles and makes payment for her order using a self-service screen at a KFC restaurant in Hangzhou, China. (JINTANA PANYAARVUDH / THE NATION)

On a morning at Hangzhou’s Wen’Er street vegetable market, customers were seen queuing with mobile phones in one hand, ready to scan the QR payment code, while getting produce from vendors. Shop owners said upwards of eight out of 10 customers used apps to pay. However, there were still people paying by cash.

Gan Jinfang, who sells fresh seafood at the market, complained that she had lost money because customers cheated her by paying with fake bills. But with app payments now taking over, she and her husband can concentrate on preparing their wares without worrying about counterfeit notes.

“That’s very convenient. I felt unsafe having to carry cash and go to the bank,” she added.

You might think mobile payments is a trend only adopted by young people, but market vegetable seller Jiang Goufang said the number of her elderly customers using the apps is gradually increasing. However, poor eyesight means they sometimes key in the wrong figure, she admitted.

“I will also tell them to be more careful when using the mobile payment. But if the figure is wrong, I return the money to them through the app as well. See, it’s very convenient!”

Chen Shuihua, chief of Wulin night market in Hangzhou, has set an international benchmark by turning the whole market into a cashless domain. In September last year, all 180 stalls in the six-year-old downtown market began accepting mobile payment.

For Gao Youzhen, who sells tofu at the market, receiving payments through Alipay helped her secure a loan from Ant Micro Loan, which helps small enterprises.

Ant Financial uses big data and AI to assess users’ credit worthiness based on their purchase, payment and other commercial activities within the Alipay app and partner platforms before approving the loan, a spokesman for the firm said.

The fintech firm offers several kinds of incentives to encourage users to adopt their payment app. For example, they offer shoppers discounts at some shops when paying through Alipay, while merchants get a free doctor’s appointment when they accumulate a certain credit.

The company also has staff instruct elderly vendors in how to use Alipay, Xia Jinlian, the 55-year-old owner of a rice shop at the market, explained. Xia faces few problems with the system since it is the customers’ responsibility to scan the QR code.

Chen Shuihua, chief of Wulin night market in Hangzhou, has set an international benchmark by turning the whole market into a cashless domain. In September last year, all 180 stalls in the six-year-old downtown market began accepting mobile payment.

Chen said vendors no longer need to worry about payment and transactions, which frees them up to concentrate on their service. Also being freed up is the Hangzhou traffic.

All 8,000 public buses began accepting mobile payment almost two years ago, which has encouraged more people to use public transport, said Luo Xuqi, a representative of the public bus company. “We also offer a seamless service for visitors who don’t have city bus cards, as they can pay by mobile phone,” he added.

For Wang Zhimin, a professor at the University of International Business and Economics in Beijing, this futuristic world is a boon.

As a child he dreamt of not needing a wallet, since he had a habit of losing stuff – including his money.

“Now my Chinese dream has come true. It’s easier for me to carry just my mobile phone when going out,” said Wang, who is also director of Institute of Globalization and China’s Modernization. 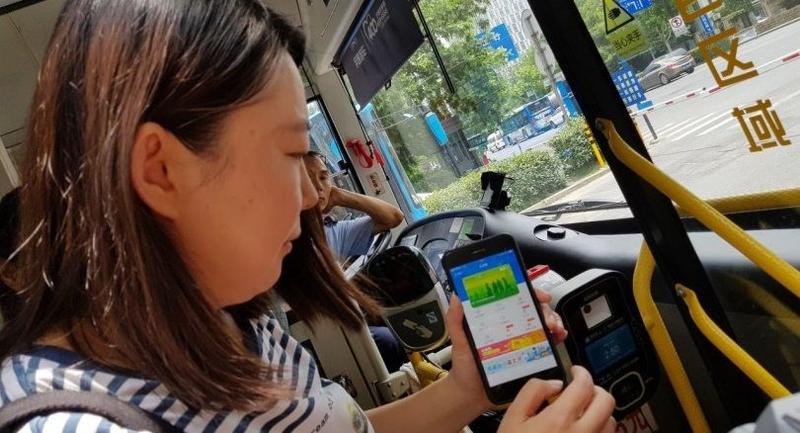 In this undated photo, a passenger shows her public transportation card before scanning at a machine on the bus to pay for the fees at Gu Dang bus station in Hangzhou, China. (JINTANA PANYAARVUDH / THE NATION)

Huang Tianyi, a 23-year old postgraduate student at Shanghai International Studies University, used to lose her wallet and bus card, but since she started using a mobile payment app almost five years ago her worries are gone. “Of course, for me, a smartphone is more important than cash. It’s very convenient [to pay this way] as long as I don’t lose my phone. I just go out with my key and mobile phone, without carrying any money. Otherwise I might lose my cash,” Huang said.

Like other young Chinese, Huang seldom uses cash. Before the semester began she brought 500 yuan in cash from her hometown and she still has 100 yuan left four and a half months later.

Huang uses a payment app to buy things and services – to call a cab, buy a public transport card, cinema tickets, air tickets, to pay for her mobile-phone card, and more. She also puts money into her student card and pays tuition fees via the app.

However, Huang has experienced some difficulties due to mechanical payment errors. Embarrassed to find herself without any cash backup, she had to borrow from friends.

Nowadays she only carries cash when she travels. Hotels in China ask for a cash deposit of 100-200 yuan, although most accept full payment by app.

So is cash about to disappear from China?

In modern cities such as Shanghai or Hangzhou, you can go out without cash every day, she said. But China has a huge population of 1.3 billion and not everyone has the know-how to use a smartphone or download and use the apps, she added.