By The Phnom Penh Post/ANN 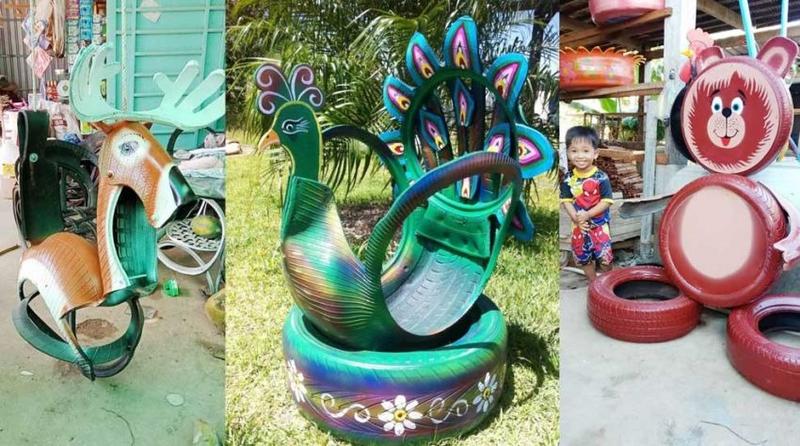 PHNOM PENH —  A former credit officer from Prey Veng province is attracting customers with his creativity as he turns old car tires into furniture, colourful garden decorations and playground equipment.

“As a child, I really liked turning car tires into toy animals. In the past, children like me didn’t have any options for toys. If there were even any toys on sale, we couldn’t afford them. I simply made my own toys without learning from others,” Soeung Sourkea said.

It was an unexpected turn, making his childhood hobby into a business he is able to earn a living off.

As a child, I really liked turning car tires into toy animals. In the past, children like me didn’t have any options for toys. If there were even any toys on sale, we couldn’t afford them. I simply made my own toys without learning from others.

Sourkea qualified as an accountant and worked as a credit officer for different micro-finance companies for eight years. The stress and pressure from this work became the push factor for the 33-year-old to give up his career and start his own business based on his childhood hobby.

Fed up with his career, he wanted to shift his focus into starting his own small business. His wife of four years helped support the family with her income from the small convenience store she runs while he started.

The photos of his recycled creations went viral on social media, impressing some people enough that they drove some 50 km from Phnom Penh to his workshop on National Road 8 in Pea Reang district’s Snay Pol village, Prey Veng province.

Sitting on a self-made tire chair in his workshop on the ground floor of his home, Sourkea tells The Post: “I could see how easy old car tires were to find and decided to try recycling them into furniture, garden decorations and playground equipment. I only started recycling old car tires about half-a-year ago. I haven’t made as many things as I plan to yet.”

Turning his hobby into a business was a steep learning curve for him. Every day he would spend an hour or two exploring techniques he could use in his small workshop.

“I did not learn from any skilled people how to recycle old car tires into these things. I always watch DIY videos on Youtube and look at photos on Google,” he said.

Among Sourkea’s rubber goods are chairs, tables, plant pots, toys, ride-on animals, swings and playground tunnels. All items are made to order, with some  clients dictating the style they want and others leaving it up to Sourkea’s imagination.

“Most of my recent clients I’ve met through acquaintances who like my creativity. For now, I don’t have many models on display or in stock,” he said. 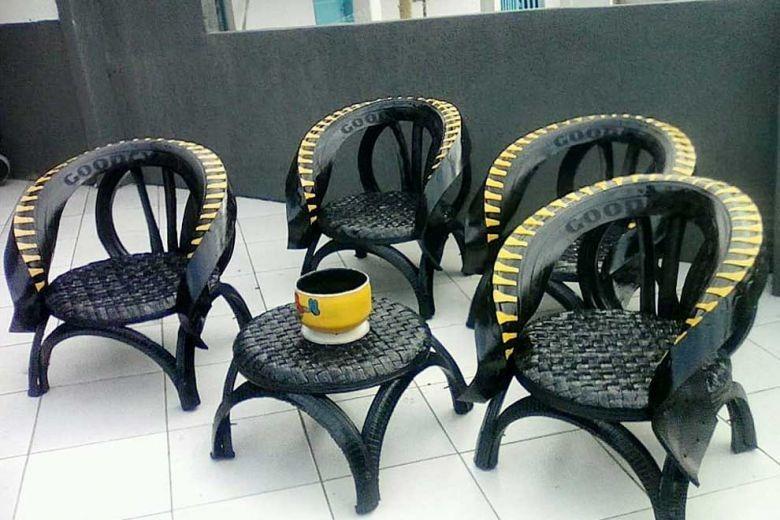 For now, Sourkea is alone working in his shop, with the designing, cutting, framing and painting all done by him. For this reason, each item is a labor of love that takes him days to complete.

“A coffee table set and four chairs took me about four to five days to make because I did all the work alone for the rubber parts. The clients can add marble or glass on top of the table if they wish to,” he says.

Even though Sourkea loves making things from used car tires, he says he will not expand the workshop unless his hobby can bring enough income to support his family.

“I started to recycle old car tires for decorating and relaxation as an experiment. I think it will take about one to two years for this new business to take off. I’ve prepared myself for this venture after quitting my job in microfinance,” he says.

“I’ve given myself a few years to try making a living from my hobby. If the result turns out not well or if my tire creations cannot support my family, I will stop and do something else. If it turns out to be successful and I can support my family, I’ll continue and expand the tire workshop to a bigger scale of production.”

His creations have caught the eye of private and public schools, concerned with child safety and providing playgrounds made of recycled goods.

“I got some orders from schools to provide swings, ride-on toys and tunnels for their playgrounds. They said these tire creations are good for children as they are soft and not harmful for children’s play activities, reducing injuries, slips and falls during school break time,” he says.

With growing support from the public, Sourkea has to work increasingly hard to meet the client demand.

“My major challenge is transporting my supplies. I still use a reumork [a motorcycle attached to a long trailer] to fetch old car tires from Phnom Penh and bring them to Prey Veng province. But I can only bring back a small amount of old car tires, which is the most important raw material for my workshop."

“If I could upgrade the means of transportation, I will be able to have plentiful raw materials and can make some items ready for stock, display and sale at my house,” he says.