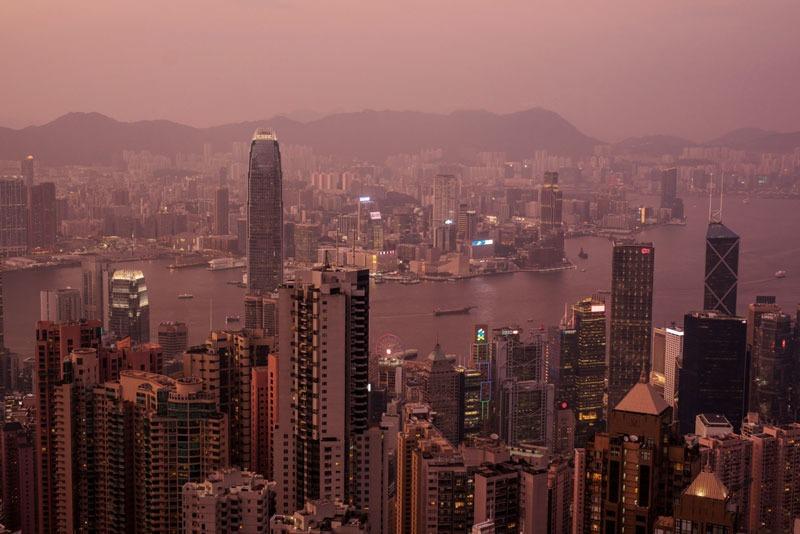 HONG KONG - Hong Kong government trimmed its economic growth forecast for this year as the economy continued to face a triple whammy of a slowing mainland economy, global trade tension uncertainities and social unrest triggered by the extradition bill incident.

The administration on Friday downgraded its forecast for this year’s gross domestic product growth rate from the previous zero to 1 percent to negative 1.3 percent for the full year of 2019, the first annual GDP contraction since 2009.

The Hong Kong government also confirmed on Friday its economy plunged into its first recession in a decade in the third quarter.

The economy shrank by a seasonally adjusted 3.2% in July-September from the previous quarter, in line with a preliminary reading, revised government data showed. Gross domestic product (GDP) contracted for the second consecutive quarter, meeting the technical definition of a recession.

From a year earlier, the economy contracted 2.9%, the same as the preliminary drop. The readings were the weakest since the global financial crisis in 2008/2009.

Looking ahead, the difficult external environment is likely to persist in the near term. Recent economic data point to the continuation of a synchronized growth slowdown in major economies. The government will continue to closely monitor the situation and introduce measures as necessary to support enterprises and safeguard jobs

“Looking ahead, the difficult external environment is likely to persist in the near term. Recent economic data point to the continuation of a synchronized growth slowdown in major economies. The government will continue to closely monitor the situation and introduce measures as necessary to support enterprises and safeguard jobs,” government economist Andrew Au said.

“As the economy has contracted by 0.7 percent during the first three quarters from a year ago, a full-year recession now looks inevitable for 2019. We have further revised the 2019 GDP forecast from 0.3 percent to negative 1.1 percent,” said Carie Li Ruofan, an economist at OCBC Wing Hang.

“Economic growth for 2020 will remain sluggish although a low base effect is expected to provide some support in the later part of 2020. We do not expect a clear recovery to emerge until the second half of 2020 when domestic confidence is forecast to be restored to pre-crises levels,” predicted Chung Ling-wei and Bernard Aw, principal economists at IHS Markit.

Hong Kong’s private sector business activity, as tracked by IHS Markit Hong Kong Purchasing Manager’s Index, dwindled at the record-fastest pace in over 21 years since the survey began in 1998.

“We see no quick fix to the economy’s challenges, particularly the threat to the city’s reputation for stability, which has underpinned its role as a global commercial and banking center,” Bloomberg Economics Economist Qian Wan warned, forecasting Hong Kong economy may shrink 1.5 percent for the full year of 2019.

The US-based financial information services provider cautioned that although the government has adequate fiscal reserves to unveil a bigger stimulus package to support businesses and households, its measures unveiled in its annual policy address and short-term fiscal stimulus are far from sufficient to revive the economy or restore confidence.

Alicia Herrero, Asia Pacific Chief Economist at French-based investment bank Natixis, agreed. “The Hong Kong government has missed the boat on fiscal stimulus to provide the much-needed support to the economy. The stimulus announced so far only accounts for 0.7 percent of GDP, which is highly disproportionate to the current difficult time.”

Natixis estimated the city’s economy may contract up to 2 percent this year and retreat up to another 3 percent next year if the domestic dilemma persists without meaningful fiscal stimulus.