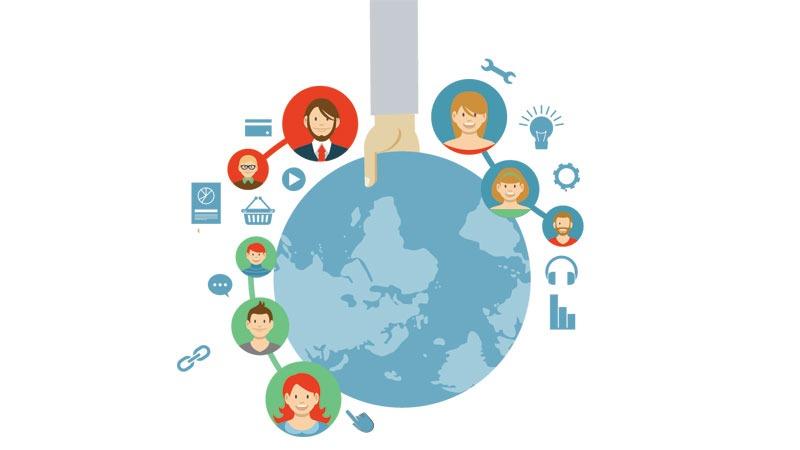 Although the protest violence which has gripped Hong Kong for more than six months gradually died down in late November, Angelo Giuliano, a consultant in finance, remains uncertain whether to leave the city where he has lived for three years.

The 50-year-old Swiss explained that during the city’s prolonged social unrest, he found local people too engaged in politics. He doesn’t want his 2-year-old son to grow up in a polarized society.

Another major concern is the safety of his family. “In the past several months, every time my wife took my son outside, I was worried about their safety, for fear of being attacked,” said Giuliano, whose wife hails from the Chinese mainland.

During the city’s months-long turmoil, the tension between Hong Kong and mainland people became intense as some who speak Putonghua were physically and verbally abused by radical protesters on the streets and mainland-linked enterprises repeatedly vandalized by rioters.

“I was shocked when I saw the video of that mainland reporter assaulted and unlawfully imprisoned at the airport for hours but no one managed to get him out of there.” At that moment, Giuliano realized things had gone out of control.

The financial executive said he may move to Shenzhen with his family in the future.

While the social unrest prompts many expats in Hong Kong, like Giuliano, to look outside of the city for a place to spend the rest of their lives, the global financial center is running into trouble recruiting non-local talents.

In early November, a local conglomerate asked the Hong Kong-based headhunter to scout for graduates of Peking University or Tsinghua University, the two most prestigious universities on the mainland, with five to eight years of working experience to help expand its business across the boundary. The employer offered favorable compensation packages, as well as attractive development prospects.

Previously, more than 90 percent of those Lee contacted would be willing to accept such an offer, but this time, half of them refused Lee directly.

“This never would have happened in the old days,” Lee noted. But he said it is understandable as these top talents also have other similar or better options outside Hong Kong. “Why not choose a more stable and friendly place?”

In fact, Hong Kong has been losing its attractiveness to overseas talents even before the prolonged civil unrest.

According to a survey conducted in March by the expatriate networking website, InterNations, Hong Kong dropped to 52nd among 82 world cities people would like to live in. Hong Kong was ranked 49th last year. In 2014, the city was in 10th place

According to a survey conducted in March by the expatriate networking website, InterNations, Hong Kong dropped to 52nd among 82 world cities people would like to live in. Hong Kong was ranked 49th last year. In 2014, the city was in 10th place.

Hong Kong universities suffered particularly during the social turmoil — campuses turned into battlefields, and the reputation of universities undermined.

A year-3 PhD student at the Hong Kong University of Science and Technology surnamed Tang saw black-clad radicals storm onto the campus, vandalizing facilities and cafeterias in November. He made the decision to leave the city after graduation.

“I felt scared. Later on, the scare turned to disappointment.” Tang said.

Tang was confounded by people’s tolerance of violence and worried that any conflict could be inflamed, possibly triggering unpredictable events.

Two years ago, the man from the mainland chose further studies in Hong Kong because of its abundant academic resources and academic rigor. But today, he found “the welcoming place to study” has turned into “a city being violently torn apart”.

It’s difficult to carry on academic research in an unstable and unfriendly environment, Tang noted, adding that the “certainly negative uncertainty of the city’s development” is another reason which led him to make the decision.

According to Tang, the annual academic hiring season for his major begins in October. The department normally has held several job seminars for assistant professor positions with listed candidates by December. But in early December this year, Tang revealed, the number of job discussions remained at zero.

Some fresh mainland PhD students, in Hong Kong only for six months, have begun to think about leaving the city and applying for programs elsewhere, Tang said.

In September, the City University of Hong Kong confirmed that almost 100 non-local students and several overseas professionals have given up studying or working in Hong Kong.

A number of universities in the United States and Canada have withdrawn from exchange programs with their Hong Kong counterparts.

Fourteen US universities halted their Hong Kong study abroad programs for the spring semester because of safety concerns. 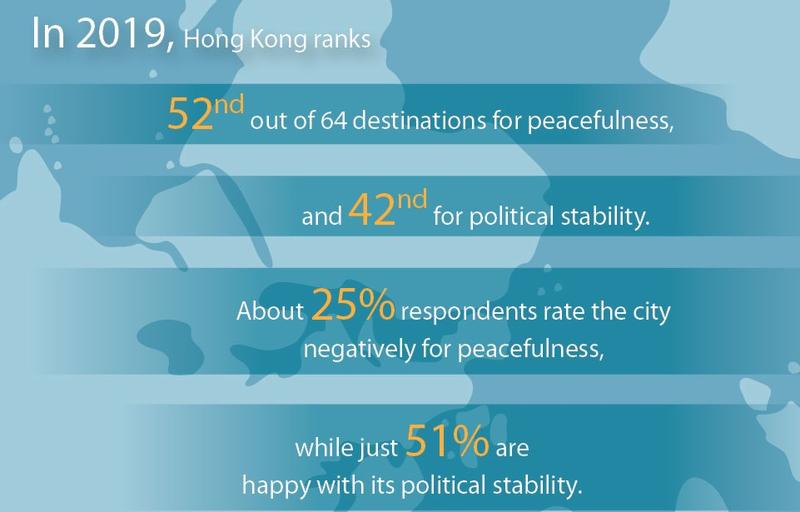 According to an InterNations survey

Bringing violence to an end

The unrest has tainted Hong Kong’s international reputation and reduced its competitiveness in the struggle to attract global talents, said Lau Siu-kai, vice-president of the Chinese Association of Hong Kong and Macao Studies — a leading think tank on Hong Kong affairs.

Under the current circumstances, more top talents and professionals may choose Hong Kong’s competitors, including Singapore, Tokyo, Taipei, Dubai. They may even opt for Shanghai and Shenzhen — China’s two fast-growing economic powerhouses — said Armstrong Lee, founding president of Alumni Association of the Graduate Studies of the CUHK.

Among these cities, Singapore and Hong Kong have always been favored among global talents looking for work in Asia because of their significant economic status, free and open business environment, high English proficiency, as well as plural and open societies. Hong Kong still retains some advantages because of its low taxes and proximity to the Chinese mainland, Lee said.

Lee thinks the city’s urgent mission is to bring the chaos to an end and restore order. “More education and advertising related to the importance of the rule of law are in need,” he said.

Terence Chong Tai-leung, executive director of the Lau Chor Tak Institute of Global Economics and Finance at the CUHK, said he was not worried that Hong Kong will have trouble recruiting global talents because of its established status as an international financial center.

The associate professor said he was confident about the robustness of the economy though the protracted street violence landed a heavy blow to the city’s economic development, especially tourism and retail.

“But if the social unrest continues, it will be a different thing,” Chong noted.

According to the Census and Statistics Department, the city’s gross domestic product fell by 2.9 percent in the third quarter from a year earlier. This marks the first year-on-year decline since the global financial tsunami of 2009.

Given that economic growth is always coupled with social stability, Chong said he hopes the unrest will end as soon as possible so the city can move on.

After that, Hong Kong should optimize its policies, including its visa policy to ensure non-local talents can enter and leave the city more easily and freely, Chong said. The city also needs easily accessible international schools for non-local talents’ kids, he added.

Joshua Mok Ka-ho, vice-president of Lingnan University, says it’s difficult to predict what price the city’s universities will pay if the social unrest and violence continue.

In Mok’s view, what everyone, including the Hong Kong government and local universities, should do is to send the message around the world that the city remains safe and free.

After addressing safety concerns, universities need to ensure that operations including curriculum and research won’t be suspended, Mok said. “Otherwise, it will impose far-reaching negative impacts on the universities’ reputation.”

In early November, Lingnan University invited about 120 educational experts from 30 countries and regions to a seminar in Hong Kong, Mok elaborated. “The event allayed the doubts of some participants about safety issues and showed that the (local) universities are capable of continuing to work on academic research and events.”

Echoing Mok, Lee said that after Hong Kong returns to tranquility, the government needs to do more promotion overseas to show that the city still has many advantages and remains a welcoming and free society.

To make the case, the Hong Kong government has launched two rounds of advertising campaigns overseas over a period of three months.

In December, a full-page advertisement published in Australian newspapers, The Wall Street Journal and Financial Times introduced Hong Kong’s fundamentals and reassured the world the international financial hub will soldier through difficulties.

In addition to top professionals in finance and business, academic talents in science and technology are also in great demand, as Hong Kong perseveres in its attempt to become a global sci-tech hub.

It also requires that for every three non-local talents hired, the Hong Kong organization needs to employ one local full-time employee for at least a year.

In a newly released report, the think tank said the matching requirement could burden sci-tech startups and small-and-medium enterprises with having to hire additional staff.

“It is important for the government to adjust the matching requirement for a better balance between safeguarding job opportunities for locals and supporting startups and SMEs,” the report read.

Moreover, the government should extend the program to professionals from a range of technology-related fields, such as intellectual property protection and data management, to fully release the city’s potential in research and development, it suggested.

Recruitment of talents is one of the key factors in an increasingly globalized world. The troubles over the summer have raised strong headwinds as the city struggles to make progress.