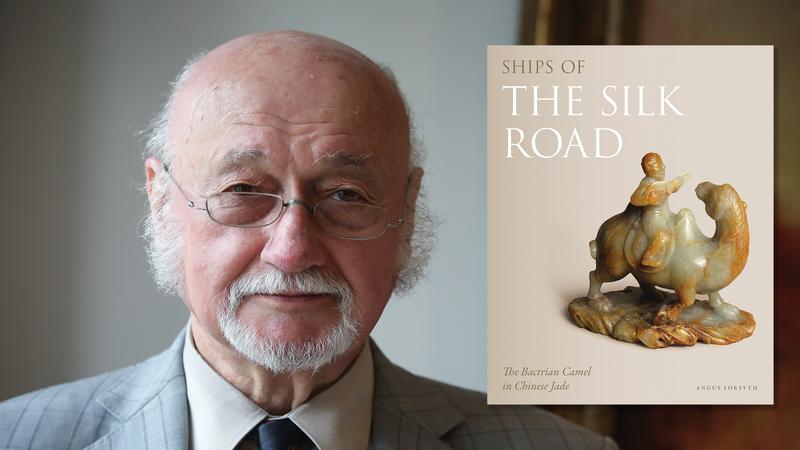 Angus Forsyth’s new book studies antiquities carved in jade as documentary evidence of the traffic that passed through the Silk Road. (PHOTO PROVIDED TO CHINA DAILY)

It was along Hong Kong’s Hollywood Road — a street known for its many art and antiques shops — that Angus Forsyth first began to develop an interest in jade. Forsyth first visited Hong Kong in 1971 and although he would buy his first jade piece in his native UK a few years later, he soon returned to Hong Kong and to the Hollywood Road jade shops where he began to build his collection.

“I’ve been a collector since day one,” says Forsyth. “I’ve collected many categories of things, so coming to Hong Kong I was compelled to collect.”

Forsyth’s interest in jade was partly triggered by his interest in China, developed while he was studying to become a lawyer. “In my mind jade and China, or more accurately the Chinese, are synonymous,” he says.

An internationally respected collector and expert on Chinese jade and a former president of the Oriental Ceramics Society of Hong Kong, Forsyth recently published a book titled Ships of the Silk Road: the Bactrian Camel in Chinese Jade. Using pieces from Forsyth’s personal collection as illustrations, the book explores the traffic that once passed through the Silk Road — a trade route that linked China with the West and was in most active use from about the 2nd-century BC to the 1400s  — to help readers understand how the Silk Road operated through a Chinese lens.

The book also examines the importance of the Bactrian camel, which Forsyth describes as “the core goods vehicle” during this time period. Forsyth writes: “The chariot, wagon and other wheeled conveyances, and indeed the horse as a draft animal, were useless in the shifting sands of the desert. Meanwhile, the slow but surefooted progress of the camel reigned supreme.”

Forsyth first began putting together notes and ideas for the manuscript in 2008, but his early research began more than three decades earlier. In the late 1970s, he bought a jade camel in Hong Kong and later came across a set of four camel-shaped mat weights. Those pieces sparked his interest in collecting more jade camels.

“I started to look at all kinds of avenues of jade camels and periods of jade camels and the result is in here,” Forsyth says. “I wanted to know why the camels were there:  What they were doing, who organized them. This is something that has taken many, many years.”

The book covers several different eras starting from around 1000 BC up to 1980 and thus covers a number of different artistic styles. But for Forsyth, “It’s not a question of singling out one period over another because the camels are a continuity.”

Forsyth has written about jade before and the subject clearly continues to fascinate him. In the 1990s, he contributed two chapters to a book on jade and co-authored Jades from China, released on the occasion of an exhibition held at the Museum of East Asian Art in Bath, UK. Following the publication of Ships of the Silk Road, he has started work on a new book about celestial beings carved in Chinese jade, to be published by Bloomsbury later this year.

“The new book is about the representation of human flight in jade over 15,000 years,” he says. “It’s a look into the origin of the idea of human flight both east and west.”

He also continues to build his collection, with a particular focus on three-dimensional and early production pieces. He says he is particularly interested in these categories “because there’s no writing about it”.

“You have to make informed judgements as to why things were made and what they were for,” Forsyth adds. “Looking at pieces without the benefit of writing means we don’t know why people did anything with these things. There’s been a lot of interesting theoretical writing about very early jades and so the work goes on.”

Ships of the Silk Road: The Bactrian Camel in Chinese Jade