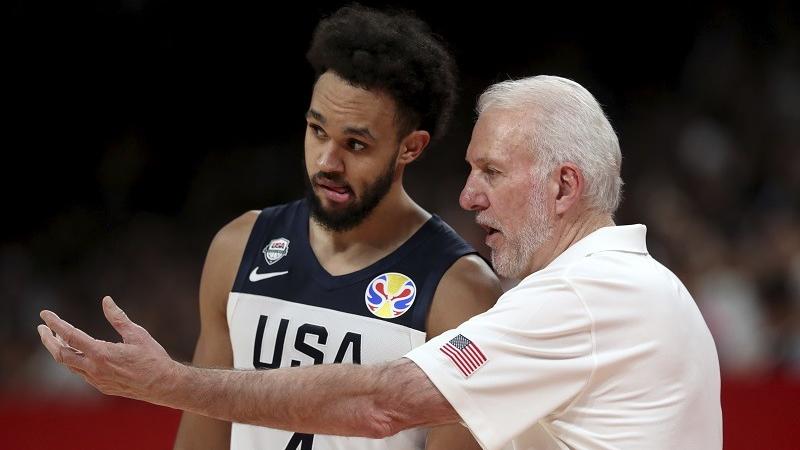 SHENZHEN, China - The first mission for the US is complete: The Americans are going to the Tokyo Olympics.

Kemba Walker and Myles Turner each scored 16 points, and the Americans earned a top seed for the quarterfinals by beating Brazil 89-73 on Monday in the final second-round game of the tournament.

We're thrilled that we've qualified for the Olympics. With this new situation in qualifying, you don't want to do that every year. That's a pretty big grind

The US, bidding to become the first nation to win three consecutive World Cups, will face France on Wednesday - and won't have to go through any extra qualifying tournament next summer for the Olympics.

"We're thrilled that we've qualified for the Olympics," said US coach Gregg Popovich, who will lead the Americans in Tokyo next summer as well. "With this new situation in qualifying, you don't want to do that every year. That's a pretty big grind."

It was a win three nations could celebrate: The US victory not only resulted in an Olympic berth but also clinched an Olympic spot for Argentina and a quarterfinal spot for the Czech Republic. The Czechs moved on despite losing earlier Monday to NBA MVP Giannis Antetokounmpo and Greece.

The Czech Republic grabbed the last place in the round of eight via a three-team, points-differential tiebreaker over Greece and Brazil after they all went 3-2 in group play.

"It's already been a dream," Czech guard Tomas Satoransky said.

Greece defeated the Czech Republic 84-77 in Shenzhen, an outcome that meant the US went into the Brazil game assured a spot in the quarters. All that was at stake was seeding and where it was going, either to nearby Dongguan by bus or back on a plane to Shanghai.

Get the bus ready. France, a 100-98 loser to Australia on Monday, awaits the US on Wednesday in the quarterfinals. Other quarterfinal matchups: Spain vs. Poland and Serbia vs. Argentina on Tuesday, and Australia vs. the Czech Republic on Wednesday. 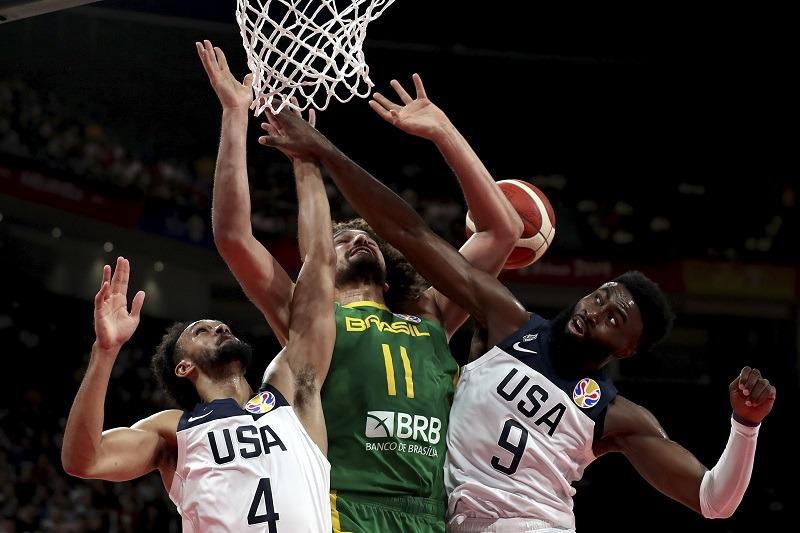 Brazil's Anderson Varejao fights for the ball against United States' Derrick White at left and United States' Jaylen Brown at right during a match for the FIBA Basketball World Cup at the Shenzhen Bay Sports Center in Shenzhen on Sept 9, 2019. (NG HAN GUAN / AP PHOTO)

The only way to stay in the mix for gold now is to keep winning. That's the approach the Americans - likening the World Cup feel to an NBA Finals feel - have carried throughout the tournament anyway.

"Pop talked about how this is June, this is June basketball," US guard Joe Harris said. "That's what our mentality has got to be like."

The US opened on a 14-7 run, then led by as many as eight late in the half - yet went into the break with only a 43-39 lead, unable to shake Brazil despite shooting 55 percent in the opening 20 minutes thanks largely to Walker and Turner. They were 9 for 11 in the half from the floor combined, while their teammates were 9 for 22.

Eventually, the Americans pulled away. 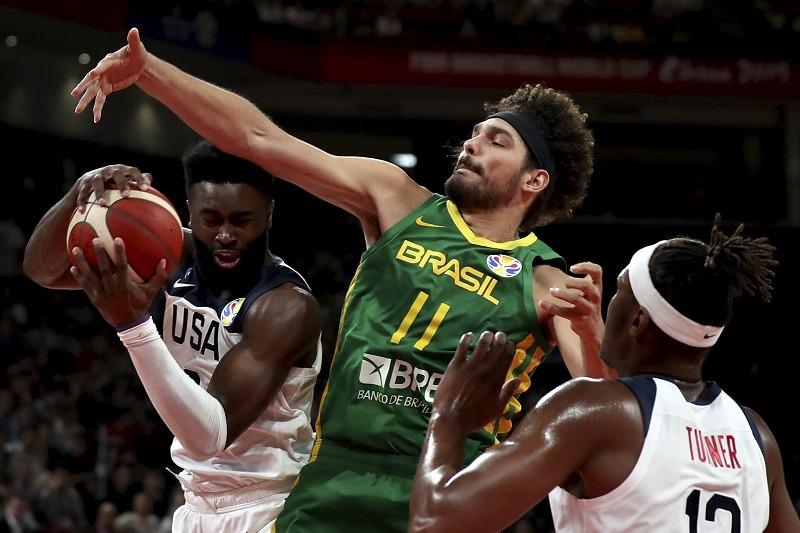 Marcus Smart's buzzer-beating, hand-in-his-face 3-pointer to beat the third quarter horn put the US up 11, and a 15-6 run to start the fourth - mostly by getting to the rim, including back-to-back scores by Barnes, and capped by a 3-pointer from Walker - put the game away and gave the Americans an 83-62 lead with 5:50 left.

"For most of the game we played them tough," Brazil forward Anderson Varejao said. "But in the end, we couldn't keep up."

US: The US pushed its winning streak in major international tournaments - Olympics, World Cup and FIBA Americas - with NBA players to 58 straight games. ... Walker, who missed the morning shootaround with an illness, was in the starting lineup. ... The Olympic berth was clinched because automatic spots go to the top two World Cup finishers from the Americas region, and the US and Argentina are the lone quarterfinalists out of that group. ... Smart, who has twice battled leg issues this summer, limped to the bench in the fourth quarter in obvious discomfort. He was walking normally not long afterward.

Brazil: Vitor Benite led Brazil with 21, and well-known NBA names Anderson Varejao and Leandro Barbosa each had 14. ... Brazil has lost seven consecutive meetings with the Americans now, but always seems to be a thorny opponent for the US in the World Cup. The teams' last meeting in 2010, a 70-68 US win, went down to the final second and a missed shot by Barbosa. And Brazil topped the US in four consecutive meetings at worlds from 1959 through 1970. 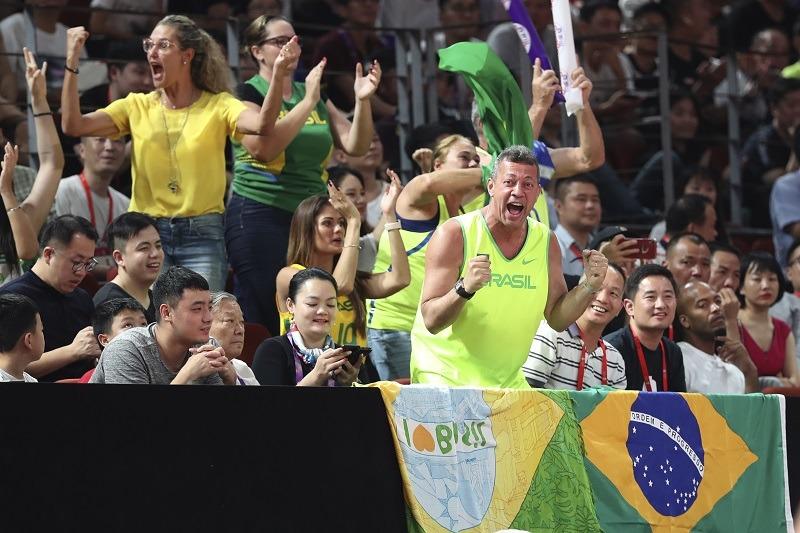 Brazil's fans cheer during a match against the United States for the FIBA Basketball World Cup at the Shenzhen Bay Sports Center in Shenzhen on Sept 9, 2019. (NG HAN GUAN / AP PHOTO)

The US men will be in the Olympics for the 19th time next summer, extending their record. The only Olympic basketball tournament that didn't have the Americans was at Moscow in 1980, when the US boycotted. The US is 18 for 18 in earning medals - 15 gold, one silver and two bronze.

Brazil coach Aleksandar Petrovic was ejected in the second quarter after picking up his second technical foul. His first came midway through the first quarter after arguing a kicked-ball call, then waving his hand dismissively at a referee's warning to calm down. The second came when Varejao had a clear lane to the basket, got cut off by Turner and no foul got called - so he went off, and was sent off.

US: Face France in quarterfinals Wednesday at Dongguan, China.