Rioters should be held accountable to restore order in HK 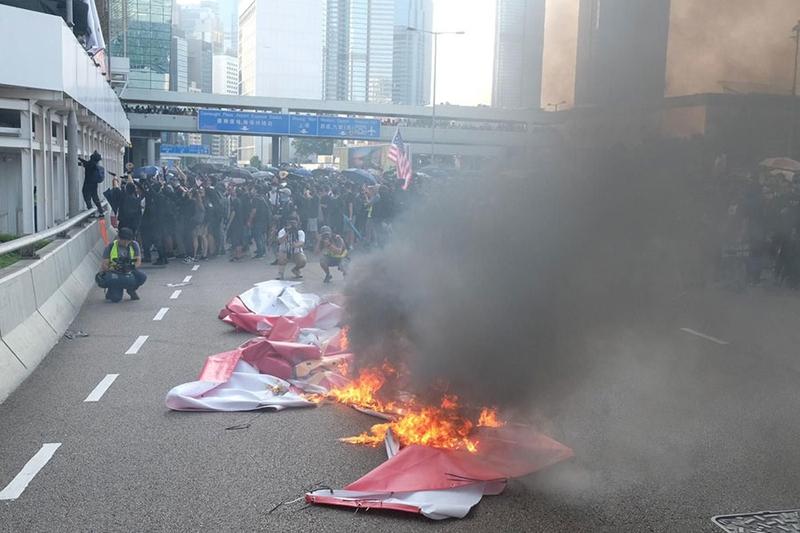 A group of black-clad protesters tore down and burned a banner reading "to celebrate the founding of the People's Republic of China". (PHOTO / CHINA DAILY)

International conventions such as the Universal Declaration of Human Rights and International Covenant on Civil and Political Rights explain what a "democratic society" is or should be. In general, a democratic society should be pluralistic and inclusive, and have space for different points of view, which should be expressed in a peaceful manner.

It is ironical that the "pro-democracy" demonstrators claim to be protecting universal values despite doing exactly the opposite: violating the law, and trampling democracy, human rights and freedom

However, the demonstrations that started in opposition to a bill to amend the SAR's extradition law soon became violent, taking a heavy toll on the city. It transformed into a seesaw battle between the police and the violent demonstrators, who resorted to gasoline petrol bombs and attacking police officers, undermining the rule of law in the city.

The demonstrators even tried to break into the SAR Legislative Council building, wantonly damaging LegCo facilities. Worse, they defiled the national emblem and national flag.

The insurrectionists even blocked Hong Kong International Airport, the city's subway and main traffic hubs, and vandalized public property, paralyzing normal activities. In other words, they held the city to ransom to fulfill their narrow political goals.

Yet their criminal acts, which tantamount to terrorism, have been ignored by some Western media outlets and governments. Some in the West have even called the insurrectionists "pro-democracy fighters" when the truth is that the demonstrators have tarnished Hong Kong's image as "Asia's world city" and an international finance and logistics hub.

It is ironical that the "pro-democracy" demonstrators claim to be protecting universal values despite doing exactly the opposite: violating the law, and trampling democracy, human rights and freedom.

Claiming to be fighting for freedom of speech and human rights, the rioters have tried to stifle sane voices because they do not care for other people's human rights, especially if those people do not support their "cause of rioting".

Some Western politicians and media outlets have been making irresponsible remarks glorifying the insurrectionists and supporting the violence in an attempt to whitewash the crimes of the violent demonstrators — and to further incite youths and heighten tensions. The real intention of these Western hypocrites is to cause chaos in the city and exploit the situation to check China's rise.

Some Western politicians and media outlets have pointed an accusing the finger at the Hong Kong police, claiming they have abused their power. But their evil designs will never succeed, because there is a consensus among sensible people across the world that the Hong Kong police have exercised considerable restraint, which have even made them vulnerable to attacks.

The situation in Hong Kong is serious, as some radical demonstrators have crossed the bottom line of the "one country, two systems" principle, which will have dire consequences.

Rational, law-abiding Hong Kong residents have organized many rallies to oppose the violence. And it is such law-abiding residents that represent the public opinion in the SAR. The Hong Kong police and judiciary should not only be supported but also encouraged to take resolute measures and hold the rioters accountable so as to restore public order in the city.

There are many lessons to be learned from the chaos in Hong Kong. But first, the SAR authorities have to put an end to the violence, which is necessary to build a platform for dialogue and implement institutional reforms to help the city recover and return to track of development.

The author is a professor with the Institute for Human Rights at China University of Political Science and Law.