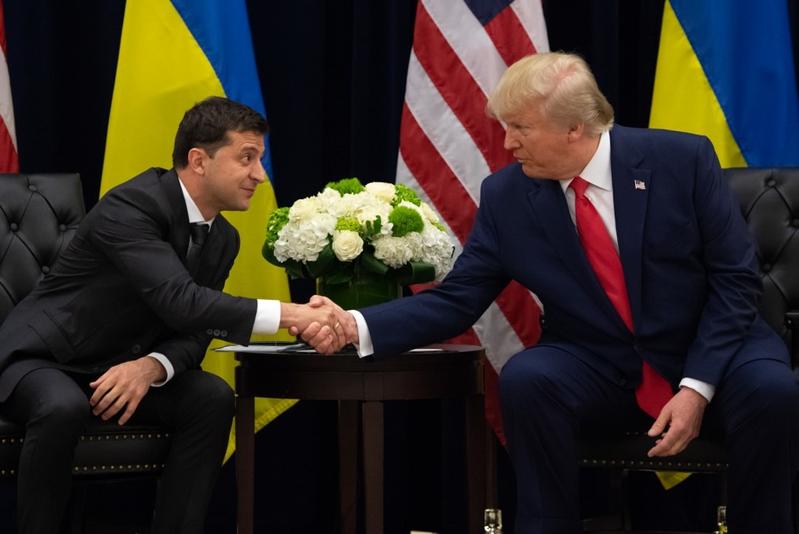 US President Donald Trump and Ukrainian President Volodymyr Zelensky shake hands during a meeting in New York on Sept 25, 2019, on the sidelines of the United Nations General Assembly. (SAUL LOEB / AFP)

WASHINGTON — The White House on Wednesday released a memo of the phone call between President Donald Trump and his Ukrainian counterpart Volodymyr Zelensky.

The phone call, which happened on July 25 and is now under congressional investigation, is at the center of increasingly heightened tensions between Congress and the White House stemming from a whistleblower complaint filed in mid-August by an unidentified intelligence official, which alleged that Trump interacted inappropriately with a foreign leader and made an unspecified "promise."

House Speaker Nancy Pelosi announced Tuesday that the House will launch a formal impeachment inquiry into Trump, accusing the president of "betrayal of his oath of office, betrayal of our national security, and betrayal of the integrity of our elections."

Will the Democrats apologize after seeing what was said on the call with the Ukrainian President? They should, a perfect call - got them by surprise

Trump tweeted after the release of the memo that the Democrats should "apologize" upon seeing the "perfect call."

"Will the Democrats apologize after seeing what was said on the call with the Ukrainian President? They should, a perfect call - got them by surprise!" he said.

According to the rough transcript, which the White House said in a disclaimer "is not a verbatim transcript of a conversation," Trump mentioned Democratic presidential candidate Joe Biden several times during the call, at one time suggesting that Zelensky cooperate with US Attorney General William Barr in investigating into how Biden stopped a prosecution of a Ukrainian company which might be related to his son, Hunter Biden.

"There's a lot of talk about Biden's son, that Biden stopped the prosecution and a lot of people want to find out about that. So whatever you can do with the attorney general would be great," Trump said.

The Wall Street Journal reported Friday that Biden, during his trips to Ukraine as vice president, had asked the Ukrainian government to fire former prosecutor general, Viktor Shokin, who had launched an anti-corruption investigation into Burisma Group, a private Ukrainian gas company of which Biden junior was a board member during his father's vice presidency.

During an event held in January 2018 at the Council on Foreign Relations, Biden boasted about pressuring the Ukrainian authorities to sack Shokin by threatening to withhold some 1 billion dollars in loan guarantees.

"Biden went around bragging that he stopped the prosecution so if you can look into it ... It sounds horrible to me," Trump told Zelensky.

In response, Zelensky told Trump on the phone that the new prosecutor general "will be 100% my person," adding that "he or she will look into the situation, specifically to the company that you mentioned in this issue."

Trump in the phone call also asked Zelensky to do the United States a "favor" with respect to the congressional testimony by Special Counsel Robert Mueller, who investigated whether Russia interfered into the 2016 US election and whether Trump obstructed justice.

Trump said he would like Zelensky to "get to the bottom of" the Mueller testimony, which he said was "an incompetent performance, but they say a lot of it started with Ukraine."

"Whatever you can do, it's very important that you do it if that's possible," Trump added.

Pelosi reacted to the release by reiterating an assertion she made in Tuesday's impeachment announcement that Trump "will be held accountable," and that he is not "above the law."

"The fact is that the President of the United States, in breach of his constitutional responsibilities, has asked a foreign government to help him in his political campaign at the expense of our national security, as well as undermining the integrity of our elections," she said.

There, however, are no explicit remarks by Trump during the call regarding future defense assistance from Washington to Kiev.

READ MORE: Democrats to continue probes of Trump amid no indictment unity

Trump on Tuesday confirmed media reports that he had ordered the halt of almost 400 million US dollars in military aid to Ukraine one week ahead of the phone call, but he told reporters that the suspension was because European countries did not pay their fair share to help the Eastern European country defend its national security, adding that the aid from the United States was already paid.

Zelensky expressed to Trump his frustration that European Union member countries "are not working as much as they should work for Ukraine," especially when it comes to "sanctions against the Russian Federation." He said he would like to thank Trump for "the great support in the area of defense."

The White House is expected to send the whistleblower complaint to Congress by Thursday, according to media reports citing administration officials. Congressional committees probing the matter have demanded that they acquire the content of the complaint.